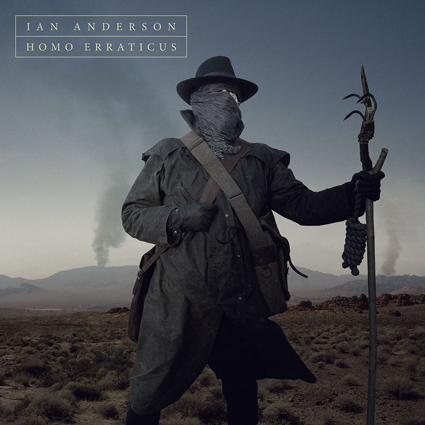 There is no stopping Ian Anderson, who is back again with his latest release Homo Erraticus, which finds him using lyrics that offer several predictions for the future. These lyrics are based on an old historical manuscript that have examine key events throughout British history, all thanks to his reuniting with Thick As A Brick lyricist Gerald Bostock for the first time since 1972.

This conceptual piece from Jethro Tull frontman Ian Anderson continues his unique sounding prog, which is an amazing fusion of Folk, Rock and Blues styles. Many of the progressive artists have been enjoying a renaissance, along with remixing many of their albums for surround sound. This hasn't escaped Anderson, who released a few Jethor Tull albums in 5.1, including Aqualung, Thick as a Brick, Benefit, along with the 2012 follow up Thick as a Brick II. We are pleased to see that he is continuing to provide high resolution stereo and surround mixes with his own new release. There are multiple editions of the Homo Erraticus album, two of which include a 5.1 surround mix on DVD-V disc with Stereo Audio 24/48 LPCM (uncompressed lossless and DTS 5.1 Surround mix.

The album speaks about the start of the colonization of Great Britain, beginning in 'Doggerland with the land bridge during the last ice age. Skipping quickly forward the story continues with the invasion from the outsiders, all the way to the frenzied present day modern life. Musicianship is supported by the talents of Florian Opahle, John O'Hara, David Goodier, Ryan O'Donnell and Scott Hammond, with mixing by Jakko Jakszyk and produced by Ian Anderson.

Compared against much of the current day pop, Homo Erraticus is superlative. However, this is nowhere near Andersons best work, yet very listenable and a great concept album that continues to shine a spotlight on the progressive rock genre. Sound quality is fantastic, with a well rounded surround mix to engage listeners. Andersons voice distinctly sings from the center channel, then to be heard from all channels for several lines, with additional layers acting as unison parts, creating a wide spread of his voice in the soundscape.

The balance is excellent among the various instruments, with organs, synths, guitars and alternate parts typically emanating from the rear channels while the bass drums and vocals occupy the front. Treatment is relatively dry, which creates a wonderfully tight and very clear sound. Listeners won't find much in the way of movement in the mix, but nor does the music call for it. Instead surround sound fans will be pleasantly immersed by a full and rich layering of many parts, all which tell the story in great detail. Fans will go places and learn from the experience, hopefully stepping away with new insights. It could be said that Homo Erraticus is ultimately about averting worldwide disaster and maybe even finding our way to a new Eden.

Strongly recommended for fans of Jethro Tull and Ian Anderson. Multi-channel listeners will certainly consider this a worthy inclusion for their surround collection.

Audio CD and a DVD-V which includes a 5.1 surround sound mix. Also available on Vinyl.