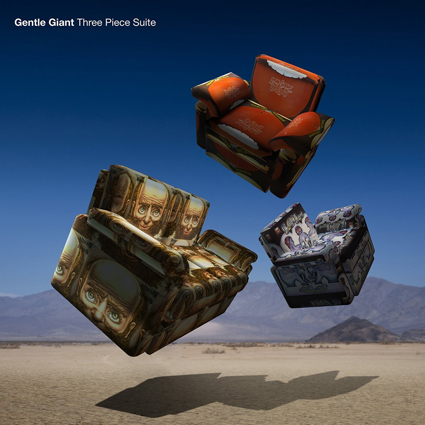 Continuing with the Gentle Giant surround remixes, mix meister Steven Wilson has assembled and remixed a specially curated selection of songs from their first three albums of which just a few songs are known to still exist as studio multi-tracks, sadly the rest apparently were lost. Thus, it is these nine tracks that have found their way into Wilson’s hands for this special release. “Three Piece Suite” includes the songs “Giant”, “Nothing at All” and “Why Not” from the band’s first album “Giant”; “Pantagruel's Nativity”, “The House, the Street, the Room” from their second album “Acquiring the Taste”, and “Schooldays”, “Peel the Paint”, “Mr. Class and Quality” and “Three Friends” from the album “Three Friends”. Also, the unreleased song “Freedom's Child” sourced from their first recording sessions has been included too.

The collection is available on Blu-ray + CD featuring 2017 Steven Wilson 5.1 mixes in 24-bit / 96kHz DTS Master Audio and 2.0 hi-res PCM. Animated videos for the Wilson mixes have been incorporated, plus instrumental versions of all tracks, and high resolution flat transfers of the complete original mixes from all three albums.

Of course it is a disappointment that the multitrack tapes for the majority of this early Gentle Giant material have gone missing. As a collector of surround sound, I initially hesitated on ordering this release. However, what became so appealing was the inclusion of the analog to digital transfers of the original stereo master tapes in high resolution audio. More on that in a moment.

My first impression of the tonal balance was flat, as it seemed that the top end lacked sparkle. This initial impression quickly changed, as I reminded myself that it is the ingredients that make a meal, thus one must consider the source of every element placed into the mix. A cook can easily destroy a dish, where a chef given the same ingredients can create a masterpiece. I rapidly became aware that once again audio engineer Steven Wilson has clearly put on his chef’s hat, and added spice to the mix, giving new life to a set of beloved classic progressive rock songs.

What had initially bothered me, I suddenly realized was actually an improvement in the sonic clarity when compared to the original stereo mixes. The lows are significantly more defined, and while I may not personally dig the additional weight given to the kick and low toms, on balance it is way more musical.

Three Piece Suite opens with “Giant” from their eponymous 1970 release. Organ fades in from the four main channels with the upper octaves placed in the rears and low notes humming from the front channels. In a common Wilson mixing style, bass and drums are centered up front spreading across the two channels while main vocals take the center channel. Guitars pluck out their riffs across the front and the keyboards and reflections fill the back channels. While I felt there was a slight haze over the mix, I was also pleased with the overall dynamics and clarity.

Acoustic guitars absolutely shimmer on “Nothing at All” with a wonderfully round bass digging deep into the subs. You’ll find yourself immersed with vocals as the members harmonize from all channels, and check out the guitar reverberating from the front to back speakers. In a move I have never heard Wilson do, drums take a full clockwise circle around the four mains two times while adding a psychedelic flange effect. It is these kinds of surround mixes that make a purchase like this so essential for multi-channel enthusiasts like myself.

Taking their blend of Gregorian chants and progressive rock to the next level the two songs from their second release Acquiring the Taste also step up in audio quality. “Pantagruel's Nativity” opens with keyboards split from the right front to rear channels. As the band fades in the keys swell in the rears extending the soundstage deeply behind the sweet spot. Vocals encompass the entire space while bass and drums hold down the rhythm up front. With more brilliance the overall tonal balance is spot on and the 5.1 mix completely fills the room. This holds true for the subsequent track from this album, and you’ll want to keep an ear open for the surround treatment during the interlude during “The House, the Street, the Room.” Likewise, be prepared for the squealing guitar solo that follows in the center channel.

Tracks from Three Friends cement their unique style in the prog rock world wile gaining a new level of transparency over the earlier albums remixes. A nice amount of separation is evident, and the multiple layers allow for an even deeper surround mix. “Mister Class and Quality” takes it on these found selections providing an openness previously lacking on the original stereo mix. At the tail end is “Freedom's Child” which finds the band taking an alternate path through the acoustic rock world closing out this glorious multi-channel compilation of selections from their first three albums.

I was pleased to find no audible difference between the DTS HD Master Audio and LPCM 5.1 versions, which is precisely how it should be. On the other hand, very subtle differences can be heard between the stereo and surround versions that go beyond the simple flattening of the soundstage. These amount to slight variations in apparent levels between the many parts, but the stereo LPCM remixes are still highly worthy and fans may find they prefer them to the original mixes.

Of course, we can only hope that the remaining multi-track tapes will surface from their hiding place and these earlier albums will each receive their well deserved complete surround remix. Until then, I am delighted that the original stereo masters have been transferred to 24bit / 96kHz LPCM for all three of these albums. Simply put, the original stereo mixes sound fantastic, These transfers alone make Three Part Suite totally worth the price of admission. I found the stereo transfers to be clean, very dynamic and provided extremely good separation. If I had one complaint, it would be that I can’t just press play and hear all three in a row. Yet, laziness aside, arriving at the completion of each album and the need to start the next makes listening a smidgen closer to the days of vinyl where listeners needed to get up and actually change the record.

There is no question in my mind that Gentle Giant fans must get this release, not only for the Wilson surround remixes, but also for the great stereo transfers. Progressive rock fans will also find this to be a critical addition to their collection as it provides the basis for their stupendous later releases.