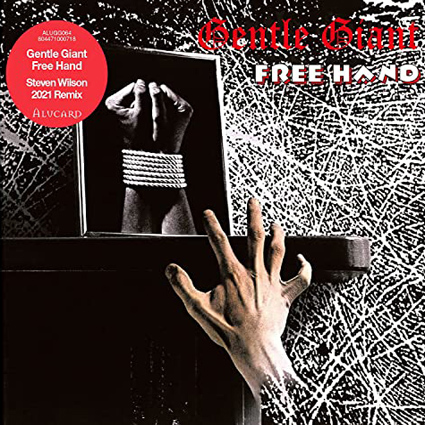 Oh, how many different copies have I collected, let me count them now. From vinyl, to CD, the Quad DVD issued in 2013, and now these incredible all new Atmos and 5.1mixes on Blu-ray by Steven Wilson that hit the shelves in June 2021. Yes, and let me count the ways how at each step there was an incremental improvement that has spiked into pure audio ecstasy on this latest Gentle Giant “Free Hand” edition.

It seems that Wilson has heard the immersion drum beat from fans and twiddled his free hand to make an awesome use of the surroundscape, easily ranking this as one of his best remixes to date. But, before I show all my cards at once, I must first note the significant differences between the earlier analog to digital quad transfer released on DVD and these new mixes, especially for quad aficionados. Also, as it turns out the quad mix has been included as part of the new Blu-ray edition, allowing audiophiles to easily compare these differences for themselves. Every one of the various codecs, excepting the Atmos, are 96kHz / 24-bit, and include a DTS HD Master Audio and LPCM 5.1 plus LPCM stereo mix of the album. The instrumental LPCM stereo versions, and the original quad versions is also available as both DTS and LPCM, while the original stereo codec is also available as LPCM too.

Wilson has effectively taken his own approach to the surround mix, racing past the quad mix, extending its sonic capabilities dramatically. Immediately from the start of the opening track “Just the Same,” snapping fingers move between the front left and the rear right channels. These have been accented differently from the quad mix, instead mirroring the stereo mix when it comes to left / right placement. Yet, the new Wilson mixes go dramatically beyond these simple changes, such as significantly improved sonics, including a more resilient bass and more refined drums. Additionally, other parts have been blended with greater care, reducing the overpowering of other elements heard on the original stereo and quad versions, such as the wind instruments and zippy synth that chimes in from time to time, fitting in perfectly with the remaining rhythm section. On the surround mix Wilson has given a lot of attention to the synthesizer pads that beam from the back channels into the fronts, plus moving across into the center during the instrumental break. For my ears, this phenomenal use of space is an absolute surround dream come true, and we haven’t even gotten out of the first track yet!

The sound quality and blending of the mix has been so radically improved, that Freehand is essentially an entirely new listening experience. For those who know the album well this is absolutely revolutionary, and it’s not often that I am so excited about such a dramatic change. Often I find myself a bit of a purist and have grown accustomed to whatever limitations are present in a classic mix. However, in this case Wilson’s new 2021 mix is such a fundamental improvement as it cleans up limitations heard on the 1975 mixes, perfecting what was not possible due to lack of adequate engineering technology back in the day.

For listeners who must do something with their eyes while engaging their ears, the various mixes are accompanied by an ongoing video collage of images and movement of graphics across the screen. However, please know that this is not available on the Atmos mix, plus I have not reviewed that version here, although I will make comments regarding the Atmos mix further down in this review.

“On Reflection” starts with a cappella vocals that make use of all five channels, beginning with the front left, then onto the front right, and reaching into the back left and the back right, subsequently finishing with the fifth voice in the center channel as the vocals build all around the sweet spot. Once again taking a comparative listen to the quad mix yields many differences between the two versions, wherein Wilson has taken a very nice musical approach to the surround version. Further in, I absolutely dig how the acoustic piano and glockenspiel appear in the back right and back left channels respectively as the vocal parts continue on. Plus, as if all this wasn’t enough, as the vocalist are singing “all around, all around” their parts swirl entirely around the room.

Overall, I find the mix to be wonderfully transparent and dynamics have absolutely been elevated. I can surely say that Wilson is certainly a master at getting the best possible sound out of each instrument and vocal part, which is very noticeable across the various new album mixes.

As one keeps listening, they should notice that Wilson has kept fairly true to placement of parts heard on the original stereo mix. Naturally, the surround space opens this all up pushing some of these elements to the back while making use of the center channel where appropriate. However, this is very different from the approach heard on the original quad mix where placement of instruments really does not mirror the original stereo mix, often totally changing the flavor heard on the original stereo mix, which is likely the most well-known by fans. Some sources have noted that the actual channel assignments are incorrect on both digital editions of the Quad mixes, and while I won’t be addressing that issue here, it could easily explain much of the divergence between the original stereo and quad mixes. Putting the quad aside, here is what you most likely want to know - Wilson has done real justice to opening the stereo mix into the surround space, giving long time fans a version that is very similar, while also offering a radical improvement.

The fourth track, “Time to Kill” absolutely shows off wider dynamics with the strong rapid fire hit of the snappy snare drum along with the playful electronic game of ping-pong at the start of the song. When the remainder of the band joins in and riffs and rocks across the front speakers, check out how the background vocals swell from the rear channels. I continue to hear a real openness and excellent separation across the new surround mix. Also, groove on the call and response of the guitars bouncing between the right and left front speakers making awesome use of the surround and stereo space.

As well as my ears can hear, Wilson has done a fantastic job at mirroring the treatments of the space surrounding the instruments such as the reverbs and delays. This certainly is evident on the tune “His Last Voyage,” and exquisitely notable on the tender vocals that are centered with the reverb falling towards the back channels. Yet, it is not just these aspects that makes this track so appealing to me. I am enthralled by the completely full kick drum and the ever so round bass joining in near the middle of the song. Plus, for me the ever so proggy psychedelic squawking guitar solo, which may be one of the best across all of the Gentle Giant’s albums, emanates from the center and occasionally squeals off to the left side.

Of course, I checked out the differences between the DTS HD Master Audio and LPCM 5.1 mixes. I found the LPCM codec to be mastered at a higher level, but tonally did not notice any difference. For those who read this far, I do feel that the Blu-ray offers a slight improvement on the sound quality over the 2013 Quad edition, and there may be no real reason to keep the CD+DVD edition released back then, as the Blu-ray is an improvement at all levels.

Regarding the 48kHz / 24-bit True HD Atmos mix some fans have expected a greater use of the height speakers, generally feeling that it is not as elevated as other recent Atmos mixes. On the other hand, while the Atmos mix is not too aggressive, it does offer enough discrete placement of instruments, plus nice details such as elements even passing above the listener.

The new stereo LPCM mix is a distinct improvement over the original 1975 analog transfer. More than just general cleanup, better balancing of parts has really taken this mix to new heights. With improved dynamics and great sonics, all previous versions no longer live up to the fantastic quality of this remix. For stereophiles, this 2021 edition will likely be your preferred version. For me, the surround version is the one, with this new stereo version a second runner up.

For easter egg hunters, there is a hidden song, containing the track “Just the Same (Outtake)” in Stereo 96kHz / 24-bit. This 6 minute instrumental piece is an outtake, which listeners can get to by accessing the menu item > Instrumentals > Tracks, then then press right on the remote when “Just the Same” is highlighted. It is also identified when ripping the Blu-ray, marked as its own chapter.

For fans of Gentle Giant and most certainly collectors of surround sound mixes, this is a must have release. At all levels this edition is a definite improvement over previous versions and offers some of the best mixing to date by Steven Wilson. Likewise, for fans of progressive rock who don’t yet have this in their collection, I strongly recommend adding it! Even for the eye candy alone, this is a fun release to include in one’s collection.