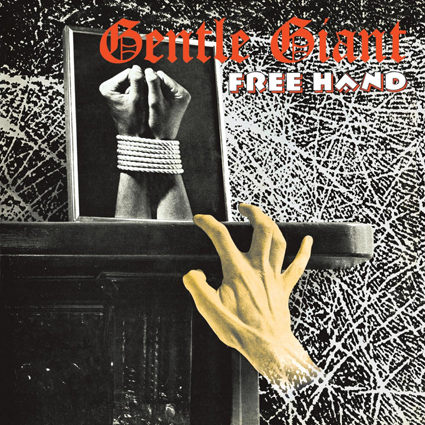 Originally released in July 1975, Free Hand is considered Gentle Giant's most well received effort. Further developing their Renaissance sounding approach, they released one of the most creative recordings in progressive rock history. Regardless of the complexity of the arrangements, the music sounds very accessible with several melodic hooks.   With this release, the band had just signed with Chrysalis Records after settling issues with their contract from the previous label WWA.

EMI released this two disc edition that includes a remastered CD, along with a DVD which contains the original 1975 Quad Mixes in 4.1 DTS 96kHz / 24-bit & Dolby AC3, along with a 96/24 Stereo flat transfer of the album, including a booklet containing sleeve notes from the band members.

The high resolution stereo version, digitally transferred from the 1/4 inch master, is somewhat bland, with no sparkle that often comes with a modern day remastering.  Cymbals sink into the background, and instruments don't have any vibrance.  However, this is still an improvement over earlier CD releases, and holds true to the mastering and mixing that was par for the course in many releases in the 70's.   The low end is good, while the mid-range is captivating.  Additionally, channel separation is fantastic, providing for a wide stereo image.

The quad mixes which are released here for the first time, had been lost for the past few decades.  Mixed over a couple of days in the basement of Advision Studios, Ray Shulman says, "after all these years, it's good to see that we were really quite adventurous with the placements in the sound field, especially given that there was just the one Quad pan-pot on the mixer."  This reviewer is not as impressed with the quad mix, feeling that there was some imbalance with lead vocals off to one side, but at least the back speakers were used in more interesting ways than many modern surround mixes.  The harmonies at the start of On Reflection make use of all four channels, and vocal lines come from both the back and front mimicking the placement of the singers on both sides of the listener.   Drums lean a bit to the right and pull a little to the back on the title track Free Hand.  Instruments are placed among the various channels, providing plenty of space, something we really appreciate in these dense arrangements.  The bottom end is exemplified on the track His Last Voyage, which moves from bass opening the piece to the full band kicking in all around the listener.  Overall the quad mix stands out better than the stereo mix for sound, but the general balance is problematic and it is easy to understand why listeners would prefer to kick back to the stereo mix.

This special edition of Free Hand is not a must have, except for die hard progressive rock and Gentle Giant fans.