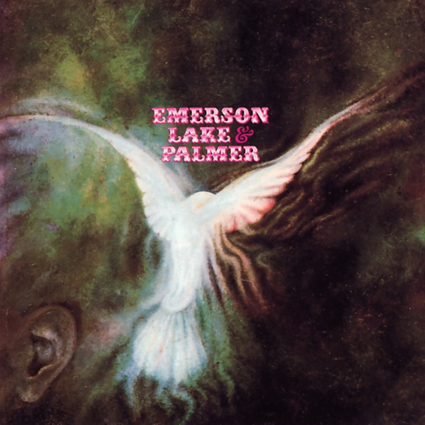 Emerson, Lake, and Palmer have reissued their genre-defining 1970 debut release as a three disc digipac deluxe edition; disc one includes the original album as released in 1970 and remastered by Andy Pearce and Matt Wortham, disc two is the 2012 stereo remixes and alternate takes, and disc three is a DVD Audio with the remixes in high resolution stereo and lossless 5.1 surround sound or lossy DTS 5.1, all mixed by Steven Wilson

If for some reason this album has not yet made it into your collection, ELP fuse classical influences with jazz spontaneity and rock power.   Keith Emerson plays  organ, synthesizer, and piano; Greg Lake adds bass, guitars, and vocals; while  Carl Palmer hammers the drums and percussion. They were all young music veterans when they joined forces,  Emerson was a founding member of The Nice, Lake came from King Crimson, and Palmer was an alumnus of The Crazy World of Arthur Brown and Chris Farlowe and the Thunderbirds.  Finding expression via classically and psychedelically inspired pieces that progressed into longer song forms, their renowned debut exemplifies their raw, primal power of this incredible trio.

Touching briefly on the original and new stereo mixes, there are clear and disappointing differences between the versions.  On the subtle side, the original mix sounds more musical and balanced.  The reverb behind Greg Lake's vocals on Take a Pebble is underplayed in the new mix which limits the enormous weight heard on the original mix.  Albeit more distinctive, the drums have also come up on the new version, and some keyboard dynamics don't feel as rich compared to the remastered 1970 mix.  We definitely prefer the original, but there are some noteworthy additions available such as a previously unreleased version of Mussorgsky's "Promenade" recorded during the album sessions which has been restored along with the addition of both "Rave-Up" and "Drum Solo."  Four other bonus tracks round out this reshuffled new version: alternates of "Take a Pebble," "Knife-Edge" and "Lucky Man" plus Greg Lake's first solo take of "Lucky Man."  Most fans will delight at hearing Lake's tender solo version of Lucky Man, but the group version which lacks the Moog solo turns around and makes up for it with more fiercely resonant playing from Lake.  The alternate assembly of this classic album succeeds mightily in allowing this album to be discovered anew with unheard material that should be sure to whet the appetite of any longtime ELP fan.

However, on the extremely disappointing side of the coin, only the final segment of "The Three Fates," entitled "Atropos," is present on the 2012 remix version.  Also Tank, with a solo drum showcase for Palmer, has also been removed from the sequence.  Wilson was forced to leave these tracks off as original multi-track masters no longer exist, precluding a remix being created.

As Wilson has proven with his mixes for Porcupine Tree, he is not afraid to use the center speaker as prominently as the surrounds. Listeners will often find the main guitar and vocals in the center, Organs and pianos in the surrounds alongside pebbles dropped into water, hand claps and so on. It's save to say that these are very discrete mixes.  The surround mix works surprisingly well most of the time with some occasional weaknesses. The quiet section in 'Take a Pebble' is very immersive, the surround mix really enhances the spaciousness of it, until the piano comes in alone at first, causing the balance to tilt to the back until the drums join in.   The surround sound version is a fantastic interpretation of the original stereo mix and adds plenty of punch, depth, and clarity.  Lake's vocals fill the room on The Knife, and the multi-channel version of Rave Up literally places the listener in the middle of the band with the drums panning all around.

The compelling reason to add this deluxe version to your collection is for the surround mix and bonus tracks.  Purists will find the unfortunate exclusion of Tank and parts of The Three Fates as a reason not to include this, especially given that the remastered original mix would be their best choice for listening.  Recommended for surround sound devotees.