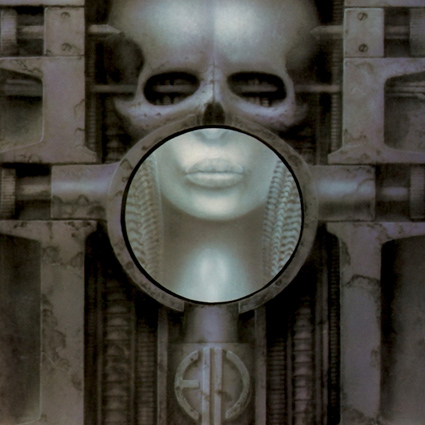 Some surround fans may wonder why the Emerson, Lake & Palmer classic album Brain Salad Surgery was re-released in surround, when an SACD Deluxe version and a DVD-Audio have already been released in the past. It would have made some sense for a couple of reasons; those previous versions are out of print and fans are being ripped off for the ridiculous prices asked for these previous versions. Unfortunately Sony/Legacy created a lot of confusion around what the 2014 DVD-Audio contained. It seems they simply dipped in on the over-priced action with a Super Deluxe box set, which contains an entirely new 5.1 mix among the 3 CD’s, 1 DVD and Vinyl album. However, we can give them some slack for also including a lower cost standard edition too which contains only stereo 24bit / 96kHz versions of both the new 2014 mix and original mix..

I picked up the standard edition which is packaged in the famous artwork by HR Giger, this is the new edition which contains new stereo mixes, previously unreleased material and more. Oh boy, why stop there? The "ultimate expansion" treatment is now here to celebrate the 40th anniversary of its original appearance in November 1973. But, they screwed this up again, although in a different way from the earlier surround releases which butchered their classic ELP album by leaving off a critical piece (heck leaving off any song is critical).

Their marketing buzz from ELP says: "We are amazed that after 40 years, so much of the original recordings, photos and artwork are still usable. Some of it has never been released before, but it's fascinating to hear how the recordings progressed. We are delighted that this new version will reveal some of these transitions."

As fans we must remember it's an album that saw Keith Emerson, Greg Lake and Carl Palmer displaying more creativity than most bands achieve in their whole lifetime. The two CD and DVD-A or the Super Deluxe triple CD, DVD-A, and Vinyl deluxe are available. Remixes have been handled by Jakko Jakszyck who has taken over from Steven Wilson to remix the remaining ELP albums. Jakszyck is a member of King Crimson and formerly of 21st Century Schizoid band. He has also produced an outstanding album in called the Bruised Romantic Glee Club, considered as one of the best produced/engineered albums of that year.

Without a surround version on hand, this release hardly seems worthy of a full review. Overall, I was pleased with the sound, and the alternate album order with alternate takes are interesting from the progression of musical composition. But, I really can't recommend the Standard Edition, as I truly believe Sony and the band made a critical error in judgment by not including a new 5.1 mix, or even the one previously released on SACD. I am certain there are plenty of fans who still desire hearing that version. Sony, what the heck were you thinking?

Roger, a long time reader of Hi-Res Edition, has sent in his comments about the 5.1 mix available on the 2014 Super Deluxe Edition noted above. He had been rummaging around online and caught wind that Jakszyck had redone the 5.1 mix of one of his all time favorite albums! Since Roger liked all of Jakszyck’s other 5.1 mixes he knew he had to have that version. With some sleuthing he found out that a limited Japanese version included the 5.1 DVD-A and excluded the unwanted vinyl; but finding a copy at a reasonable price was a little harder!

The Japanese 40th Anniversary Deluxe Edition of BSS is packaged in a similar fashion to the Sony / Razor & Tie debut LP, Tarkus and Trilogy deluxe editions with the discs and booklets housed in a tri-fold digipak. This one has an additional Japanese language booklet which also contains the lyrics in English, plus a wraparound full back page obi. The two CDs have the same track listings as the domestic and EU deluxe sets, but they have been K2HD mastered on HQCD discs (which appears to be a competitor of SHM-CD). The DVD-A has the new 5.1 mix in 96kHz /24-bit MLP, DTS and 48kHz / 24-bit Dolby, plus the new stereo mix in 96kHz / 24-bit MLP as well as the original stereo mix in 96kHz / 24-bit MLP. For DVD-Video players, LPCM is the only stereo option. The menus are simple and static with the same close-up shot of the front album cover as the background. Unlike the old DVD-A, there is no bonus material of any kind.

Roger also writes, “In general, I like this 2014 5.1 mix slightly more than the 2000 5.1 mix. This new version is similar in execution to Jakko's multichannel mix of Trilogy. It's about 6 to 7 db quieter than the old DVD-A. I prefer the vocals mostly coming from the center channel versus usually spread across the fronts. Jakko's mix to me is much "drier" and more discreet; I feel the John Kellogg mix is slightly smeared in places and sometimes a little boomy. I’m hearing bits and pieces in this remix that I haven't heard before and I always like that. I can't say for sure whether all of these differences were buried in the original mix or are alternate parts/takes being used.”

“Jakko most likely alienated quite a few fans with this mix based on other reviews I've read elsewhere. He’s turned the volume up on some instruments in places that the die-hards will, if they seek this mix out, snub their noses at. Probably the change that gets the most press are the growling/processed bass parts in portions of Karn Evil 9 3rd Impression. It was definitely jarring to hear them done this way the first time through, since they're significantly louder than they are on the original mix. But, after subsequent listens, they don't seem to bother me quite as much. Merely a hunch, but I suspect that Jakko (or maybe Greg Lake) wanted to add something different (or their signature) to those sections to perhaps "liven them up" a bit. In hindsight, I think these elements could have been dialed back somewhat, yet still achieve the same effect. To confirm whether it was merely an anomaly of the multichannel mix, I also listened to the new stereo mix on the DVD-A of KE9 3; the boosted bass is present there as well, but it doesn't startle you in quite the same way; it's spread out between the stereo speakers versus coming at you mostly from the center channel.”

“Other than this glaring change to one track, the rest of the disc is very balanced and quite detailed, almost clinical - unlike the Kellogg mix that often seems to stress certain parts over others depending on what is going on musically and at times gimmicky with random panning/swirling sound placements. So to wrap it up, I'm happy I bothered to hunt this down and add it to the pile!”