Pink Floyd - Dark Side of the Moon - Blu-ray 5.1 surround review 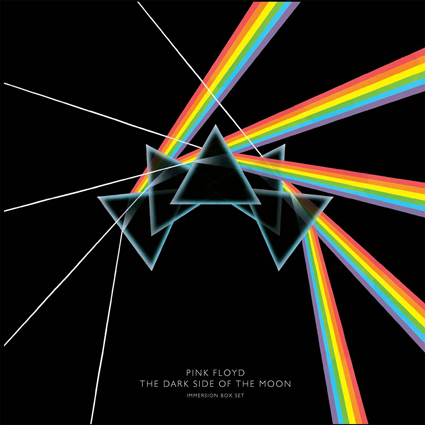 The Dark Side of The Moon became Pink Floyd's first number 1 album in the US, remaining on the chart for 741 weeks from its release in 1973.  Fans whom have grown up with this recording have likely purchased all formats that have been available starting with vinyl, compact disc, and SACD.  For the person on the go, an eight track and cassette were available through the 70's and early 80's.
Well, it's probably time to get out the wallet again for the Immersion box set which features the classic Studio album digitally remastered in both stereo and surround sound and presented as a limited edition featuring 6 discs of rare and unreleased audio and video material, plus a new 40 page booklet, containing original photographs edited by Jill Furmanovsky, exclusive merchandise and facsimile collectables.
This lavish box set is cluttered with drink coasters, oversized marbles, a table runner, notes, cards, posters, and an in depth color book that features lyrics and pages of beautiful photos and artwork.  What is missing is a copy of the original poster included with the original vinyl release.  Regardless, this memorabilia will throw you back to the early 70's when you most likely didn't have a care in the world.   Spacing out and dropping out were of top priority and this album was the leader in turning on the black light while journeying to a different place.
Audio enthusiasts will first want to hear the Blu-Ray version of the 2003 5.1 multi-channel mix done by James Guthrie.  Similar to the SACD release in 2003, it presents the album in 5.1 surround sound here at 96kHz / 24bit.  However, no distinguishable difference can be heard between these two versions.  Most collectors will already have one of the 800,000 plus SACD copies sold, and are already familiar with this fantastic multi-channel remix.  The balance on this version is a near match to the 1973 stereo mix, but expands to fill the room making great use of all channels.  Footsteps run around the outside, clocks and their chimes ring all around the listener, while the intro to money spreads the effects among the five main speakers.

Some quad purists have been waiting for the release of the original quad mix by Alan Parsons done in 1973.  This version is included on disc 3, and really shows the limitations of the technology, as well as how a lack of time to complete a project truly effects the end results.   The sound effects on "Money" were created by splicing together Waters' recordings of clinking coins, tearing paper, a ringing cash register, and a clicking adding machine, which were used to create a 7-beat effects loop adapted to four tracks to create a moving effect in quadraphonic.  The heavy use of multiple layers of sound on the album required the engineers and band to operate the mixing console's faders simultaneously, in order to mix down the intricately assembled multi-track recordings of several of the songs such as "On the Run".  Unlike Guthrie whom had access to mixing automation for the 2003 multi-channel mix, Parsons had to rely on the ability of multiple hands to accomplish the complex tasks needed to continuously shift effects and instruments among the four channels in the quad mix.  There are some rough spots, especially during song transitions, while these are non-existent on the 5.1 version.   Rhythm guitar is mixed much higher than the stereo mix, and is placed in the left rear channel, and sonically the quad mix is brittle making the Alan Parsons 1973 mix more a novelty than an Immersive experience.    But Alan Parsons is still the master, he had recorded several timepieces at an antique clock shop as a quadraphonic test, and although his recordings had not been created specifically for the album, elements of the material were eventually used  at the start of "Time" heard as assorted ticking then chiming simultaneously accompanied by a series of roto toms.   This among many other contributions make Parsons a significant part of the Dark Side of the Moon.

Included in the Immersion box set on Disc 6 is the previously unreleased 1972 early album mix engineered by Alan Parsons.  This is a very rough mix of their most well-known release, and demonstrates how a band works through different versions of songs to finally arrive at a masterpiece.  A few surprises include a slower version of "us and Then," several extended uses of spoken word, alternate sound effects, the and the lack of the heart beat drum at the head and tail of the album.  However, the most shocking difference is a series of spoken words over the "Great Gig in the Sky," that accompany Richard Wright's dynamic piano solo that closes side one of this classic release.  At a later session, Parsons invited   singer Clare Torry, a regular at Abbey Road to embellish the piece. The band explained the concept behind the album, but was unable to tell her exactly what she should do. In a few short takes on a Sunday night Torry improvised a wordless melody. Apparently she was initially embarrassed by her exuberance in the recording booth, and wanted to apologise to the band—only to find them delighted with her performance. Her takes were then selectively edited to produce the version used on the track.  The final releases include Torry's vocals and a couple of clips from the spoken words which are mixed down allowing  the piano and vocals to really take the front.

Also of note is the second compact disc featuring The Dark Side Of The Moon performed live at Wembley in 1974, a film on both DVD and Blu-Ray of Pink Floyd Live In Brighton 1972, and Concert Screen Films which were played to audiences during the Dark Side of the Moon tour on a large backdrop screen.  The concert screen films really place the listener at the concert, excepting there are no live shots of the band playing along with the footage, and since these were only played for specific portions of the album, they amount to excerpts from a listening perspective.  Regardless, the concert screen films are very interesting as they extend the beginning of the album using the heart beat along with sound effects for "Speak to Me," which leads into "Breathe."  Likewise, the films demonstrate the state of technology used in filming in an age where digital graphics literally didn't exist.

The Dark Side of the Moon Immersion box set is really an unnecessary purchase for listeners whom already have the 2003 multi-channel hybrid SACD, and are primarily interested in the best surround sound mix.  However, for fans who are interested in the changes between the earlier mixes, the differences between the quad and 5.1 mixes, along with live concert films, and concert screen films, the Immersion box set is a must have lavish box set that will be enjoyed for years to come.