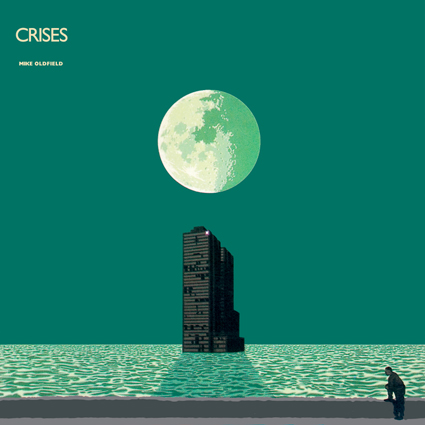 Mike Oldfield has re-issued a five disc box set of his 1983 album Crises. This album was responsible for another big hit, titled "Moonlight Shadow," featuring the vocals of Maggie Reilly, hitting number four on the UK charts, along with topping out in several other countries. The title track is a quintessential Oldfield textured 21 minute piece that consists of glistening synth washes which weaved through punchier sections. Fans of Yes will enjoy "In High Places" featuring Jon Anderson's vocal work. The high energy guitar on "Taurus 3" will likely appeal to progressive and art rock lovers. Oldfield fans should be aware of this record's pop leanings, yet it is still considered one of Oldfield's better releases of this style.

For fans seeking the surround sound version, they'll need to purchase the box set, which effectively is two albums.  Many fans have expressed disappointment over the step away from the consistency of previous releases in the 30th anniversary series, which all had been packaged in the same size gatefold boxes, containing 2 CD's and a DVD in most cases.  But, crises comes in a box that is taller and wider than a DVD case, and at least two times as thick.  It is like a small board game box, which requires some shaking and gravity to open, and the upsizing is a real hassle for adding to a collection.

With the negatives out of the way, there is a lot more to be positive about when unwrapping and listening to the 3 CD's and 2 DVD's in the Crises box set.  The CD's contain the full Crises album remastered, along with several bonus tracks, and two discs from his live concert at Wembley Arena on July 22, 1983.  But we know it is the DVD's that will attract most fans, which feature the complete Crises album remixed in 5.1 surround sound and is featured in both Dolby Digital and DTS.  The second DVD however only contain portions of the live concert at Wembley in stereo and video footage that is lacking in sharpness.  A few promotional videos fill out this disc.

As for the surround sound version, Oldfield has created a captivating mix that is full on with all six channels.  He has Placed the bass in the center channel, which works well for listeners with full range center speakers, and really provides distinct placement of an instrument that roots the music.  Keyboards are sprinkled across front and rears punctuating their various parts with a brilliance that extends to the upper ends of human hearing.   With the vast amount of parts written for his pieces, surround sound lends itself well to the use of all channels versus creating a stage in the front channels and using the rears for ambience.  Guitars come in from the left rear, and second parts are added in the center channel, but don't expect instrumentation to stay in the same location.  From sirens that move across the mix from front to rears, guitars and keyboards find themselves moving among the five primary channels, with delay and reverb taking position in opposite speakers or filling areas of the mix that may have otherwise been somewhat empty.  Oldfield's vocals on the title track are tucked gently into the mix, allowing for the music to organically fall around his voice.  As the 21 minute epic nears the end, keyboards call and answer from left to right speakers, with arpeggiated swirls carrying the segment along, accentuated by drums that pound between the left and right rears, with the kick drum punching from the front.  There are a rich amount of lows, so expect your sub-woofers to get a work out.

The original vinyl split the title track from the remaining five songs, which all clock in at less than four minutes each.  Three of the pieces are pop leaning, especially the hit song "Moonlight Shadow."  Simply put, these songs are less complex, with fewer layers and place most of the instrumentation in the front channels.  However, the rears do receive an appropriate amount of synths, acoustic guitars, and backing vocals, taking elements of these songs that were somewhat buried in the original stereo mix.

While the quality of the video is somewhat weak on the live DVD, it has been clearned up nicely, and the stereo audio tracks sound excellent.  Covered more extensively on the two CD's, it is the fantastic line up of musicians for the "Crises" tour that make the performance, including: Mike Oldfield on guitar and vocals, Maggie Reilly on vocals, Roger Chapman on vocals, Anthony Glynne on guitars, Graham Pleeth playing keyboards, Phil Spalding grooving on the bass, Simon House jamming on the violin, Pierre Moerlen hitting it on the percussion and Simon Phillips kicking it on the drums. They performed to a full concert hall each night, with the largest attendance exceeding forty thousand people.  This is the energy that is showcase on the two pieces, "Crises" and "Tubular Bells" on the DVD, along with several other tracks from the Wembley show on July 22, 1983 on the CD's.

Strongly recommended for progressive rock fans, and required for collectors of Mike Oldfield's surround sound series.  Even with the downside of the packaging, this is a must have in your collection. This Deluxe box set version of Crises went out of print, so snatch up your copy when you see it available!

ThreeAudio CD's a DVD-Video, and a DVD-Audio with a 5.1 surround sound mix.