Bill Bruford - Seems Like a Lifetime Ago - DVD-V 5.1 surround review 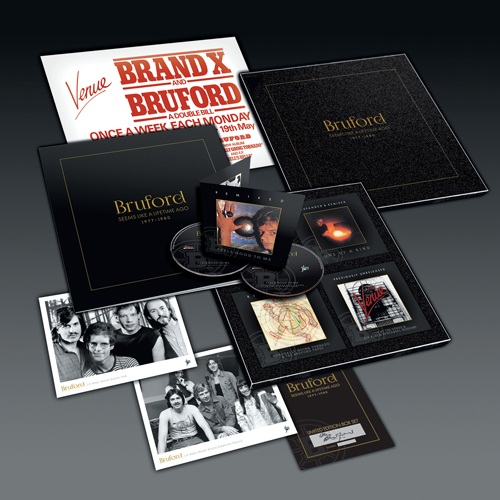 This aptly named 8-disc limited edition set of Bill Bruford late 1970s albums contains previously unreleased, remixed, or remastered material, presented in a 12” box which includes a signed, numbered certificate of authentication. Covering his first four solo albums, the great news for surround fans is Jakko Jakszyk has remixed both “Feels Good to Me” and “One of a Kind” in 5.1 surround sound and their companion original stereo mixes have been remastered on 2 DVD’s. These first two albums plus “Gradually Going Tornado” and “The Bruford Tapes” have all been remastered along with bonus tracks over 4 CD’s. The final 2 CD’s contain the previously unreleased 1980 Live at the Venue in London along with the previously unreleased 18 sketches of new material for the 4th Album Rehearsal Sessions recorded in 1980.

Progressive Rock aficionados know how the incredible talents of Bill Bruford, Dave Stewart, Allan Holdsworth, and Jeff Berlin blended so amazingly well on these albums. That makes this strictly limited edition a critical purchase for collectors. The set contains a 16-page color booklet, a concert poster reproduction, plus two black and white photo prints of the band. Due to such high demand, the original print run of 2,000 copies has been extended, with additional pre-orders taken through November 30, 2017. Burning Shed will certainly honor additional pre-orders, but check with your preferred seller as they may be able to do the same.

Having received my copy, I am delighted to say that it is an extremely solid package containing the various discs housed in four gatefold sleeves, along with the detailed book with plenty of photos, a small poster, and two large glossy photos, and of course the signed certificate, in my case number 22.

A former member of Yes, King Crimson, U.K. and briefly with Genesis, Bruford has made an indelible mark on the progressive rock world. The two albums that have been remixed into surround extend his scope into fusion, laying down the base for his later releases with his band Earthworks.

Bruford’s precision playing lends well to the multiple time signatures that are heard throughout his solo releases. Jakszyk has carefully balanced the drum parts across the surround remixes, blending bass, guitars, keyboards, vocals and other parts very musically. However, there are distinct differences between the original stereo mixes and the new 5.1 mixes, although I found these only to generally improve on the originals.

While Bruford is known for his ringing metal snare sound, this has been beefed up in the surround mix, starting to lean more toward a thwap. His crisp cymbal work on the other hand perch in the center channel with ambience spreading to the sides on the opening track “Beelzebub” from his 1978 “Feels Good to Me” album. While the toms had spread widely on the stereo mix, they remain focused in the center adding ambience in the back channels. This creative choice provides ample space in the front and rear channels for Dave Stewart’s keyboards and Alan Holdsworth’s guitar work. I feel very immersed in the mix with parts pronouncing from all corners such as the upbeat guitar hits on a few sections on “Back to the Beginning,” along with Holdsworth’s solo emanating from the front channel with percussion spread across the rears.

Jeff Berlin’s bass also takes the center channel spreading across the front speakers with a tad touching the sub-woofers at the bottom. Jakszyk doesn’t stay with a cookie cutter layout, spreading drums differently among tracks, and finding alternate spaces for various instrumentation as called for in each song. The key for all multi-channel high resolution enthusiasts is the inevitable question of discrete immersion and sound quality, the first of which I confidently give a thumbs up, with more about sound quality later.

The openness to the 5.1 mix allows for keyboard parts to be spread between front and back channels, allowing listeners to easily discern the call and response that flows through the title track “Feels Good to Me.” I dig how guitars stretch into the back channels in a reverberant pool while the bass moves the song forward.

I would not be forgiven if I failed to mention the outstanding vocals by Annette Peacock who absolutely makes this album so magical. They are distinct on every track, filled with life and emotion, holding true to the essence of the music. Likewise, flugelhornist Kenny Wheeler soars across the mix on a couple of songs applying his modern jazz into the pieces.

The second DVD contains the 5.1 mix of the follow-up to Brufords’ debut release titled “One of a Kind.” Now that I have you mostly pumped up, its time to let a little air out, with a serious disappointment for audiophiles. Both the 5.1 and 2.0 codecs are Dolby Digital AC3 48kHz, a lossy format that has thankfully been fading, but reared its ugly head back up here. While I can understand from an ease of production standpoint selecting AC3, as it is so commonplace across DVD players world -wide; what I don’t understand is that for a special limited edition that commands a price out of the reach for many fans, why a lossless version with at least 24bit / 48kHz wasn’t included for both the stereo and surround layers. I can only assume that every penny was counted to create this set, and stellar sound quality simply wasn’t in the budget. Knit picking rant over…

Scaling back to a quartet on this second album created a dream come true for fusion fans, as they delved deeper into the rock edge boasting incredible solos by Holdsworth and remarkable playing by the rest of the group.

An immersive aspect that I really like to the surround mix can be heard on the two parts of the title track “One of a Kind,” wherein the arrangement of instruments gives a feeling of sitting among the band. Drums spread slightly out of the center and keyboards fall behind the sweet spot, while the bass and lead guitars take the front center.

Although these new surround mixes don’t live up to the pure fidelity of lossless releases, they still provide a lot more clarity than the edgy earlier CD versions I have on hand. That brings me to noting the stereo versions on the DVD, which generally I prefer over earlier releases. However, listeners who seek top end brilliance will find that those frequencies have been tempered on these remasters, including the included CD’s. For me this deluxe edition still is all about the multi-channel mixes, which I find to be very good overall.

While I can’t say that I really notice a dramatic improvement to dynamics, I can say that I feel the intensity and impact of the music such as evidenced on the track “Fainting in Coils.” The power continues on “Five G” which contains heavy drumming and squelching guitar riffs that rifle throughout the song. While earth shattering crescendos aren’t translated to the level that I sense they could be with a true hi-res format, both the stereo and 5.1 AC3 version on the two DVD’s are a marked improvement.

I am not surprised that surround mixes were skipped for the later two albums “The Bruford Tapes” and “Gradually Going Tornado,” as fans never really felt the same passion after Holdsworth departed the group. Yet, guitarist John Clark does closely follow Holdsworth’s lead, but too closely to add in his own unique style. On the other hand, it would have been nice to include a DVD containing better than CD quality remasters for audio enthusiasts like myself.

Wrapping up the box set is the final two CD’s that contain the 1980 Live at the Venue in London, and the 18 sketches of new material taken from the 1980 rehearsal sessions for the 4th Album. This material is best suited for Bruford completists and musicians curious about the creative process and alternate versions. The previously released Bruford Tapes and these previously unreleased live recordings have pretty poor sound quality, with the Bruford tapes suffering from a brittle top end and overall thinness, to the hazy curtain that muffles the sound on the Live at the Venue disc. On the other hand, the 18 sketches sound pretty darn good for rehearsal session mixes, and while incomplete they provide a wonderful insight into the development of the material.

Even with its sound quality limitations, I still recommend the “Seems Like a Lifetime Ago” deluxe box set for surround aficionados, and most definitely for absolute Bruford fans and the must have everything collector. This is not a set for the casual fusion and progressive rock fan who happens to enjoy Bruford, as the cost isn’t really mirrored in the overall quality. Finally, this is a strictly limited set, so you must get it now if you want it, or be willing to pay crazy prices in the after-market. Remember pre-orders end on November 30, 2017 for the final run of this deluxe edition.

NOTE: It appears that as of November 2019, these limited box sets are still available.   However, standalone versions of "Feels Good to Me" and "One of a Kind" are now released and include the CD and DVD that are also part of this box set.  Please use the search tool to find the articles for those editions, which include purchase links at much friendlier prices.