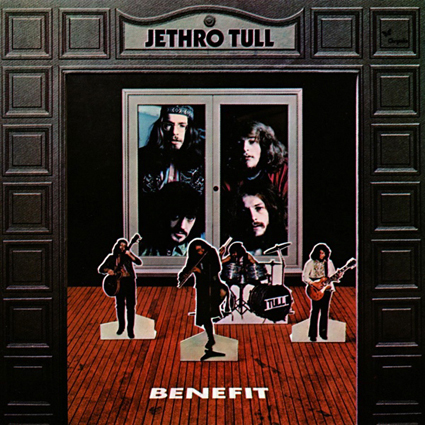 Over 40 years later Jethro Tull has re-release their pivotal 1970 album "Benefit."
The Grammy winning group has expanded the album to include a 2-CD and 1 DVD-Audio collector s edition.  The collection comes loaded with an abundant amount of music recorded by the band, which features frontman Ian Anderson, guitarist Martin Barre, drummer Clive Bunker, pianist John Evan, and bassist Glenn Cornick.

The album s 10 original tracks, plus five bonus tracks that include both the U.K. and U.S. stereo versions of "Teacher" are included on the first disc, all newly mixed by Steven Wilson and approved by Ian Anderson. The second disc includes newly remastered versions of rare tracks and singles recorded around the same time.

The audio-only 96k/24-bit DVD  is loaded with 58 tracks, including the album and bonus tracks in 5.1 surround sound. It also contains the U.K and U.S. versions of the album. The U.K. track "Alive and Well and Living In" was replaced with "Teacher" on the American version, which was sequenced differently. In addition, the three disc set also comes with a booklet filled with rare photographs, an 8,000 word essay by Martin Webb, and interviews with band members.

Comparing the original stereo mixes against Wilson's 2013 stereo remix finds both advantages and disadvantages to the remixes.   Listeners will find new life from the 2013 mixes, however these come at the cost of greater weight to the higher end frequencies.  The acoustic guitar cuts through with greater clarity, and the sound of the pick strumming across the strings is very evident.  Drums have more punch, and overall have much better definition in the mix.  But, these subtle, yet critical, changes don't feel as musical, changing the dynamics and overall mix slightly away from the vocals and more toward the band.  Careful listening also revealed differences in the ambience where delays spread wider across the channels where they hadn't before.  However, the overall mix is nearly accurate to the original and shows a lot of time was spent on details to obtain a fresh mix.

The surround mix primarily focuses the sound stage on the three front channels, adding the roundness of the subwoofers that cause both the kick drum to stand out along with the bottom of the bass notes to be really full.   Throughout the various songs some guitar parts have been placed in the rear channels, accentuating the surround mix.  The flute makes heavy use of reverb in the rear channels on the opening track, while holding the focus in the center track.  Vocals mimic this mixology, but come at a minor cost.  On the stereo mixes, the vocals on several tracks are not perfectly distinct due to the heavy use of delay, in the surround mix with the delay placed in the rear channels, the vocal in the front channel becomes dry and distinct, which effects the quality of the overall songs sound.  Wilson has done an excellent job making use of the five channels, and taken a few artistic liberties that continue to demonstrate is masterful ability as a surround engineer.  Fans of multi-channel music are sure to love this mix, and will find it is an excellent addition to their Jethro Tull collection.   Overall, I found the multi-channel version to be a wonderful listening experience.   As a super bonus for surround fans, there are a few extra tracks, including Sweet Dreams, 17, and both the UK and US versions of Teacher, that are also mixed in 5.1!

Strongly recommended for surround enthusiasts, fans of progressive rock, and certainly those music lovers who collect Jethro Tull.  BTW, if you don't already have this album in your collection, ask yourself why not?  It is another favorite among fans, and well regarded by music critics, this is the album that transitions Tull from blues to progressive rock.

DVD Audio Disc  with 58 tracks containing both the UK & US running orders in stereo, surround mixes, and extra tracks.

2 Audio CD's and a DVD-Audio containing both DTS 24/96 and Dolby AC3 in 5.1 surround sound.  Also available in Vinyl.