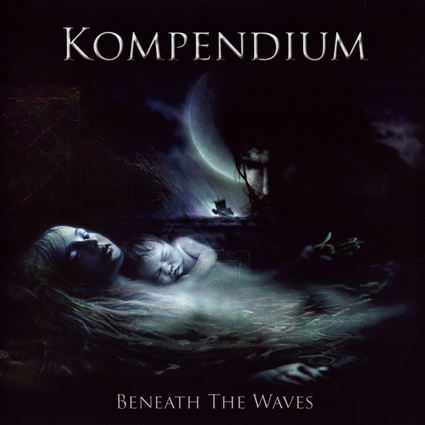 At the core, Beneath the Waves tells a dark romantic sea-tale based on an early 20th century news item: Connor McGregor is a man broken with grief. His wife Lilly committed suicide shortly after the death of their first child, leaving him with an almost unbearable sense of guilt. Then, during a fishing trip, his ship encounters a storm and sinks. Connor is the only survivor but comes back believing that Lilly has reached out to him during the catastrophe and is longing to be reunited with him. Connor closes himself more and more and takes long strolls on the beach. Eventually, one day, he does not come back....

However, the story is not treated musically as dark and depressing. It is soulful through and through. Taken from various genres, Kompendium adds a splash of opera, celtic, choral, classical, and heavy rock to form their unique progressive rock sound.  Instrumentation includes the synergy of Uilleann Pipes, Nylon Guitars, Chapman Stick, Symphonic Strings, Saxophone, Drums, Bass, Electric Guitars, and a variety of Vocals and other instruments.

As if that isn't enough to surely excite prog-rock fans, just wait until placing the DVD-Audio disc into your system.  The entire album is spectacular from the first note to the last.  Aural ecstasy radiates from all speakers filling the entire soundstage with extraordinary clarity.  With so much instrumentation, there is literally no room for any gaps in the surround sound mix.  Even during quiet moments with few parts, the placement and spectacular use of ambience never creates any imbalance, nor leads the focus of the listener out of the sweet spot.    Dynamics are wide, sound quality is engaging, and nothing feels out of place.

Take a moment to check out the videos, which are really well produced and help define the storyline.  These also include some great shots of the musicians performing their parts.

It is rare that I comment about packaging, but this is by far one of the best I have seen.  First, the 7" gatefold is a real throw back to the days of 12" albums.  Not only is the package substantially larger than the standard digipack, but the 20 page booklet is actually readable and includes lyrics and details about the musicians.  I feel as if I am taking a vinyl record out to spin it on the turntable.  It truly feels more substantial to hold this larger format package, and I wouldn't mind seeing more releases use this form factor.

The DVD features a hi-res 24/96 5.1 surround mix, a video promo and making of videos. For analog enthusiasts, a 180gm double vinyl version is presented in a gatefold cover with full colour inner sleeves and is cut directly from the 24bit/96 masters.

Kompendium's debut release is a towering success, only offered as a limited edition.  Don't miss it.

CD and DVD-Audio, or on double blue Vinyl.