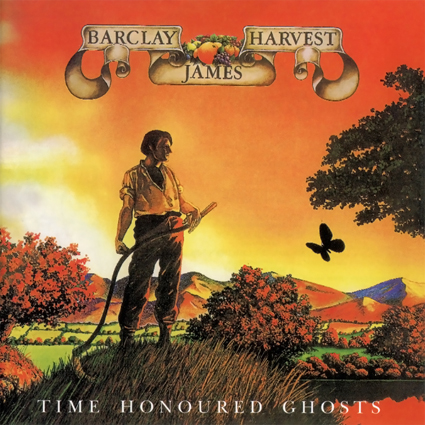 Cherry Red Records continues the reissue series from the progressive band Barclay James Harvest with a 1 CD / 1 DVD expanded edition of their 1975 “Time Honoured Ghosts.” The group had been moving away from their orchestral sweeping sound heard on their earlier albums, and it was this stripped down sound that made this album a favorite among many fans. This 2021 two disc edition has been newly remastered from the recently discovered first generation original stereo master tapes and also contains a 1975 re-recording of “Child of the Universe,” plus an NTSC Region Free DVD featuring a 5.1 Surround Sound Up-mix, which have been derived from the stereo master tapes due to the loss of the original multi-track tapes. Additionally, the DVD includes bonus visual features of five promotional films shot in 1975 to accompany the album release.

Recorded in San Francisco between May and July of 1975, the band work with American producer Elliot Mazer at his studio in California. The record includes classic tracks such as the ghostly “In My Life,” “Jonathan,” the European hit single “Titles”, Wolstenholme's unique approach to keyboard parts compared to many other prog rock bands on the song “Moongirl,” plus “Hymn for the Children,” “Song for You” and “One Night.” The expanded edition Includes an illustrated booklet with an essay by Keith & Monika Domone and a poster.

1 CD + 1 DVD expanded edition with a 5.1 upmix of the original stereo album.