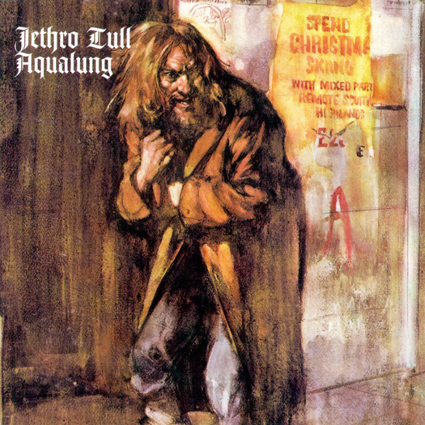 This 40th anniversary commemorative collector's edition of the Jethro Tull classic 1971 Aqualung album, features new stereo and 5.1 surround sound mixes by Steven Wilson. Analog audiophiles will relish the included 180g LP and hi-fi enthusiasts will enjoy the two stereo CD's and both the multi-channel high resolution DVD and lossless Blu-Ray discs. The Aqualung LP is cut from the new stereo mixes and housed in the reproduction of the original gatefold sleeve. The first CD includes the new stereo mix of Aqualung, while the second CD includes additional 1970 &1971 Recordings which include some previously unreleased material. The DVD includes the entire album mixed to 5.1 surround sound with 4 additional recordings all DTS Surround (96/24) & Dolby Digital Surround (48/24), the DTS is compatible with most standard DVD players, while the higher resolution version is playable in DVD-Audio players. Also included is a high resolution version of the stereo mixes of the original album - as 96/24 LPCM stereo, along with additional 1970 & 1971 recordings as 96/24 LPCM stereo. Quad fans will enjoy the original Quad mix (4.1) as DTS (96/24) & Dolby Digital Surround (48/24). For those seeking the lossless formats, the Blu-Ray includes the entire album mixed to 5.1 surround sound by Steven Wilson with 4 additional recordings all 96/24 LPCM & DTS-HD Master audio.

While many fans will baulk at the cost of this lavish box set of this classic album, they will also love the gatefold LP sized sleeve which contains the 180g vinyl record and the four discs with the various versions. The analog vinyl is literally devoid of surface noise, has wonderful dynamics and warmth common to other releases in this format. It is sad that for years record companies released music on inferior vinyl that never lived up to the potential of this format. As the resurgence of vinyl returned in the 21st century, releases have been exclusively on high quality vinyl placing compact discs in the second position for sound quality.

However, Blu-ray has changed the perception of audiophiles, and Aqualung on Blu-ray is no exception. There is a night and day difference between the stereo mixes presented on vinyl and Blu-ray. On Blu-ray a much greater separation between channels is very apparent, along with improved dynamics, and extraordinarily vibrant highs. It is easy to hear the zing of the newly strung guitar on "My God," and feels like the listener is right there in the studio as they performed this four decades ago.

However, we are really here for the multi-channel mixes, which take this album to an entirely new level. First, the original quad mix offers a very musical representation of the original stereo mix, but fails to deliver the full surround impact of the new 2011 5.1 mix by Steven Wilson. Much of the sound field is presented in the front two channels on the quad mix with some ambience and minor spread of elements toward the rear channels. In some cases, the quad mix fails to deliver the wetness of the mix, which is noticeably clear with the voices behind the flute solo on "My God" and the strings on "Slipstream". A glaring increase in the riffing guitar on "Locomotive Breath" almost makes the song impossible to listen to in this version. Yet, the quad mix holds together very well and provides a warm spatial depth that lacks in the flat stereo mix.

From the first note of "Aqualung," it is very evident that the 5.1 surround sound mix was superbly engineered. The guitar echoes from the front to the rear right channel, as the band kicks in and fills the entire room. There is a sizzle to the guitars and zest to the flute throughout the surround mix. A departure from the original stereo and quad mixes is apparent with additional wetness added, which is emphasized on Ian Anderson's voice on the title track. The la-la-la voices behind the flute solo on "My God" are spread wide and fall to the rear, really providing a sense of sitting in a cathedral. The acoustic guitar is so close and so realistic it is as if it is live. However, it is so apparent that compression was used to stripe the guitar to tape, we wish the original recording could have provided the actual dynamic range desired. Of course, the limitations of the analog tape created the need for engineers to compress signals before they peaked and distorted on tape. One other aspect to the surround mix is the stark increase in volume for both the piano and electric guitar at the beginning of "Locomotive Breath." The original mixes began this track with a distinctly softer blend of both instruments until the band kicked in. The quite introduction from the earlier mixes truly allowed the song to hit hard, and both of the new stereo and surround mixes are more even, and lack in the dynamics originally presented. Overall, it is extremely difficult to say which multi-channel mix is better, as they each have their own characteristics. Both carry very well, lending themselves to an artistic style that one ear may prefer over the other. It is great they are both provided here, and both can be equally enjoyed.

For those who do not have a Blu-ray, a DVD-Audio disc is provided, which features everything from the Blu-ray, however in alternate audio formats. While both the quad and surround mixes can be played on any DVD player in a lossy format, a lossless 96/24 version of both the new and old stereo mixes and the quad and 5.1 mixes are available as DVD-Audio only.

Two compact discs feature the new mix and a series of alternate mixes out-takes, and previously unreleased material from 1970 and 71. The previously unreleased material is compelling, especially "Wond'ring Aloud" –an out-take recorded in 1970. The nearly psychedelic flute solo on "My God" demonstrates the wide chasm crossed to reach the final release. Also added are five tracks including a favorite “From Later” from “Life is a Long Song” 7" EP released September 1971.

While this box extensively covers the Aqualung album, providing every format under the sun, including a beautiful 48 page photo album with extensive liner notes, Chrysalis has fallen short in providing a less extensive release focusing on the multi-channel mixes. Pink Floyd has bridged this gap much better with their Immersion and Experience box sets, while also providing the multi-channel versions exclusively on SACD. Jethro Tull will be releasing Thick As A Brick 2 on DVD-Audio and CD in early April 2012 at a much friendlier price point. It can only be hoped that a less extensive package will be released at a later date for Aqualung, in the meantime for those with a thick wallet this collector's edition is a required addition to their collection.

In 2018, a scaled down deluxe edition which matches the form factor of the majority of his other 40th Anniversary releases was issued. While I added this into my collection, I have yet to offer a comparison. However, I can briefly say that it is a CD and DVD edition only, losing the vinyl and Blu-ray discs that were so compelling for many collectors.