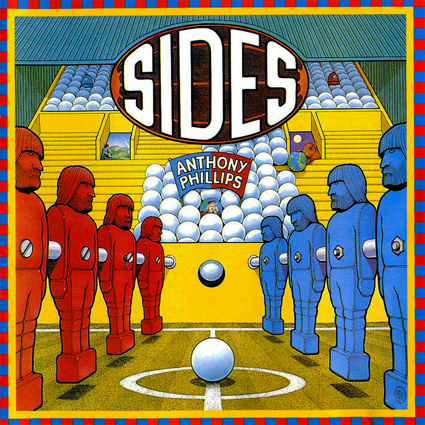 Sides by Anthony Phillips was the most commercial offering yet from the former Genesis member, while still incorporating ambition and epic progressive music found on his earlier solo releases. The 2016 Esoteric label deluxe re-issue of this 1979 album contains 3 CDs and 1 DVD, mirroring the previously issued Geese and the Ghost and Wise after the Event deluxe reissues.

Produced by Rupert Hine with guest players John Hackett, Michael Giles and John G Perry, Phillips kicks into high gear on the second half of Sides. These more orchestral instrumental pieces including "Sisters of Remindum" and "Nightmare," plus his arpeggiated guitar work on "Magdalen," continue to spread his progressive roots.

Mix quality continues to be extremely good on this third expanded deluxe release from Phillips. The second track “I Want Your Love” totally reminds me of the Wind and Wuthering era of Genesis, with vocals and harmonies spread throughout the room, and the sparkling drum kit placed to the right in the front channels. Bass is sumptuous filling out the lower regions, while guitar parts are gently tucked in the middle.

The top end is definitely peppier, giving a real shine to the guitars and clarity to the vocal parts. However, what it makes up for in brilliance seems to be also lost in warmth. The album Sides is a wonderfully immersive multi-channel mix, which can certainly be exemplified by “Holy Deadlock” with guitar parts perculating from the left and right front channels, and synth swells added in the back channels. Check out the sharp high hat in the front right channel and the vocal parts that fall around the sound stage.

I must admit “Sides” has never been my favorite Anthony Phillips album, but everything sounds better in surround! OK, not everything, but certainly the album Sides, and actually it is a damn good album with plenty of layers that allow for a wonderfully encompassing surround experience. There are truly some euphoric moments with parts bubbling up from the back channels, and dynamic punches that make it imperative to have a high resolution copy of this release.

The MLP 24-bit / 48kHz Stereo layer maintains the same great sound, without the extended sound stage of the multi-channel mix. The imaging is excellent with plenty of depth and parts standing forward of the left and right channels. The only thing lacking on the DVD are the original mix and extras found on the CDs.

Recommended for prog-rock lovers and fans of Anthony Phillips, along with those who have followed Genesis. Absolutely recommended for 5.1 enthusiasts who yearn for fantastic surround mixes and very good quality high resolution releases. Skip the pop songs if you must, there is plenty of other material to love on this album.