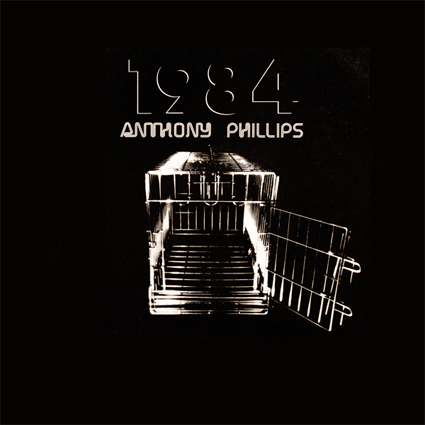 While Anthony Phillips was composing and recording the soundtrack to the British TV documentary series Rule Britannia in 1981, he also created “1984”, an all instrumental release which was a radical departure from the more pastoral feel of his preceding works. This by far has always been my favorite release by Philips, although when it was originally release, the album received a wide range of opinions among Phillips fans, yet as critics reevaluated 1984 over the years, it is now considered a ground-breaking and influential work.

The excellent news is 1984, similar to Phillips preceding releases, has received the royal deluxe treatment on the Esoteric Records label. Contained within the 2 CD, 1 DVD box set is an all new stereo mix and a 5.1 Surround sound mix, (on an NSTC-0 DVD), which includes a CD of alternate mixes and out-takes. The booklet fully restores the original album artwork and features a new essay by Jon Dann with a foreword from Steven Wilson, plus a poster all housed in a digipackcase.

Naturally the new 5.1 surround sound mix is the main attraction to this deluxe edition, and it absolutely brings new life to this nicely layered work. The region free DVD includes both MLP 24 bit / 48kHz lossless 5.1 and DTS 24 bit / 48kHz lossy 5.1 along with a 2.0 MLP 24/48k lossless codec. Unless your equipment can’t support it, the MLP 5.1 is the best way to enjoy 1984. The DTS codec has a towel tossed over top, lacking dynamics and upper range brilliance. However, if for some reason you want to approximate the original stereo mix, then the DTS layer may be your choice.

For fans who have collected previous versions of 1984, such as the double disc release from Esoteric a few years back, don’t toss those versions out just yet. The new mix is radically different, but in an extremely positive way from my perspective. Certain parts have been given greater prominence, such as the lead synth part on 1984 Part 2, while other keyboard parts were pulled back in the mix. Furthermore, the overall vail has been lifted and each part can easily be heard, especially when listening to the multi-channel mix.

A video monitor is not really needed to start this disc, but once must be patient while all of the labels splash screens are displayed. There is not an audible cue that you have reached the main menu, but simply pressing the enter button twice will play the MLP 5.1 version. There are no rotating images, only track names and the album cover art.

Apparently 1984 was recorded on an 8-track machine, which may explain why a deep room vibrating bass is not present, yet given these limitations the balance and general tonal quality is excellent. The hi-hat has a real sizzle and the upper range has a generous crispness that opens up the mix dramatically. As I mentioned there is a huge difference between the DTS and MLP lossless versions, with the delay and echo being the real stand out, adding a wonderful depth to the soundstage. Audio engineers Simon Heyworth and Andy Miles can be thanked for creating these new mixes, which are easily the definitive version at this point.

1984 is a perfect album to kick back in the sweet spot allowing the various parts to flow around you. There is an amazing use of the back channels and a few nice parts that glide across the room. The center channel has been tastefully used, with bubbling synth and lead parts, along with subtle ambience. I have come to realize that some of my favorite listening pieces are all instrumentals, and 1984 allows for deep listening enjoyment.

As a side note, the second CD contains early version mixes and the multi-part Rule Britannia Suite. Audibly there is nothing outstanding here, but from the creative path these are all intriguing. Given the capacity format of the DVD, I am somewhat surprised these weren’t transferred and included as bonus material in a higher resolution.

For multi-channel enthusiasts already collecting the previous Anthony Phillips releases, this is a no brainer, and they probably already have it. Progressive rock and fans of synthesizer music should have this in their collection, especially for those who love surround sound mixes. The new stereo MLP version also makes this a very worthy release for those who haven’t yet jumped into the multi-channel audio world. I will add only one cautionary note, preview the music somewhere before you purchase, as 1984 is truly a departure from his previous works, yet still my favorite by far.