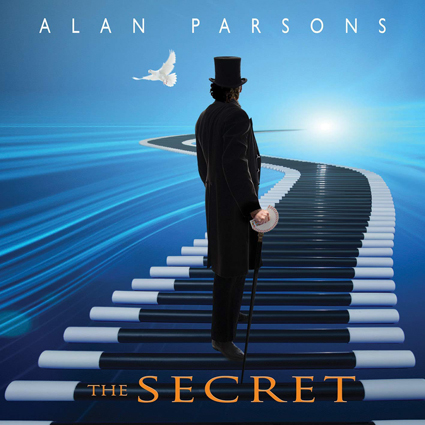 Alan Parsons has released his latest album “The Secret” on Frontiers Music on multiple formats, including CD, CD+DVD-A Deluxe Edition, or on vinyl LP and digital downloads. For Hi-Res enthusiasts the DVD-A contains both a High Definition Stereo and 5.0 surround audio mix.

The Grammy Award Winning musician and producer has return to the pop rock sound with symphonic and progressive rock interludes which the Alan Parsons Project has been so well known for. Collaborating with Jason Mraz, Alan comments they have mutual musical interests and for the track “Miracle,” they each recorded their parts in their respective hometowns of Dallas and Santa Barbara. While Mraz while recorded his vocals, Parsons listened at his end sending files back and forth. A wonderful example of how our world can be so close, while we are so far from each other. This studio magic also happened with Lou Gramm on the track “Sometimes,” which he sang in New York.

A fantastic orchestral based piece titled “The Sorcerer's Apprentice” opens the album, immediately immersing the listener into an enveloping 5.0 space. Parsons has meticulously recorded each part, providing a brilliant clarity that shells out a robust low-end that pumps along in a vibrant beat. He blends a symphonic and rock orchestra seamlessly together with guitars, drums and electric bass along-side a full complement of strings. It’s an incredible way to open the album both dynamically and texturally. The DVD surround layer is a DTS 48kHz / 24-bit 5.0 that skips the sub-woofer, primarily making use of the four channels that make up the front and rear stereo pairs, while also adding in a light use of the center channel.

Parson’s is truly a master at using the surround scape, emphasizing parts that swell up from the left and right channels with secondary parts falling in the back speakers. The album moves into the pop vain with “Miracle,” an extremely catchy tune with exquisitely warm vocals that fall snuggly between the two front speakers. Their transparent ambience is surrounded by the band which is rooted up front with secondary parts and ambience placed in the back channels. The center channel emits the light touch of the keyboards, a trend I have started to notice on other modern 5.0 mixes which are also pulling away from placing vocals in that speaker. Personally, I rather like this style as I feel it fills the room more fully with the vocals. Furthermore, Parsons also tends to use ambient reverb with a lighter touch, keeping things very close as if the instrument is perched right by your ear. This provides for amazing clarity that sounds incredibly distinct and dramatically improves the imaging. There are some points where instruments shift just slightly within the soundscape allowing for the focused blending to make even the subtlest of move so apparent.

I have become somewhat accustomed to bright snare drums, which is not what you’ll find on this recording. Parsons has elected to keep the drums a little bit more subtle, which allows the music to blend smoothly across the entire soundstage. The nuanced variations in dynamics are very evident on the third track “As Lights Fall.” It is these kinds of details that are meaningful to me when listening to a high-resolution recording, and I absolutely revel at the light to heavy strikes of the snare drum, along with the refined vocals and the detailed overtones of the guitar.

The lows are resilient and resonate as what may be my favorite track “One Note Symphony” fades in with synthesizers and bass parts. The one voice, one note, one melody vocals chime in with resilient string parts swooning from the rear channels. The song builds with a robotic beat which draws the listener in to the crafty melody vocalized by a synthetic effect that pour out of the three front speakers, penetrating the listening space and emanating to the back channels. The thunderous bottom builds during an interlude that then drones under a monologue, describing modern society in detail. The sonic stage becomes deep and very wide surrounding the entire listening space. I believe this is precisely the kind of 5.0 mixing that enthusiasts like myself seek.

The next song “Sometimes” slows down featuring gentle acoustic piano from the back right channel and emotional vocals that lightly stretch across the room. These are accentuated by the crisp high hat that ticks out the time underneath the stringed instruments that surround the sweet spot. The secret moves between softer and louder songs, painting an aural story that is masterfully sequenced, keeping me engaged throughout the album.
“Requiem” employs brilliant horns that dynamically punch at various points throughout the piece, extending the dynamics in a sensational way. Sultry vocals spread across the soundstage and the drums meticulously keep the time with their gentle beat. The sonics are so clear, which is also true of his Alan Parsons Project releases, yet this reminded me of Steely Dan’s album Gaucho, which has one of the highest levels of recording detail I have heard to date. It is parts like the snapping fingers that extend widely across the front channels adding a wonderful depth to the mix. Although I can’t be certain if it is the actual acoustics of the recording room where parts were played that provide depth, the ambient space is blended perfectly under this piece, and once again shows off the strength of hi-res releases.

For visual geeks, picture slowly rotate as each track plays along, providing some I candy for those who yearn for something to look at while listening. I like the simplicity of the authoring of the DVD-A with its easy selection of surround or stereo codecs.

The album is certainly melancholy at points reflecting on the goodness of what life has offered. The use of different lead vocals and other guest musicians has provided a unique character for each song. Yet, the mixing quality and overall sound remains outstanding, keeping a perfect balance and mastering level from track to track. The secret truly is A wonderful surround listening experience and for stereo audiophiles, you will find the album equally as compelling with the same level of detail as described above, except placed in the flatter stereo field, and available as 48k DTS or Dolby Digital.

This is an extremely strong release from the veteran progressive rock artist, making it a must have for fans of Alan Parsons and collectors of prog. Surround enthusiasts and hi-res audiophiles surely will want to add this in their collection as both the 5.0 and 2.0 mixes are outstanding with top notch audio quality.