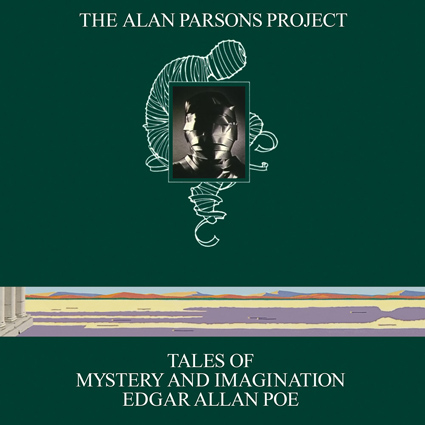 Alan Parsons, the legendary recording engineer who brought us Pink Floyd’s “Dark Side of the Moon” in amazing quadrophonic sound back in the day, is now releasing his own fantastic material in 5.1 surround sound. To the dismay of many surround sound enthusiasts, a pledge music campaign containing a multi-channel mix of “Tales of Mystery and Imagination” was initially only included in a super deluxe box set that also includes a cache of bonus material on CD and audiophile vinyl versions too. However, the excellent news is the campaign then made available a stand-alone Blu-ray version of the 5.1 mix which also includes a download card. This soon became available through major retailers, shortly after the deluxe version is already listed on Amazon.

While this debut release from Parsons is not his most popular, it is arguably his best. The album is extremely mesmerizing, taking the listener through an aural journey of some of Edgar Allan Poe's most renowned works. For surround fans, the deep layering of synthesizers, guitars, along with a glockenspiel all weave together with a scintillating effect make way for an immersive treat. No matter which version you buy, I am pretty certain you will love it as much as I do.

But first let’s be clear, I am reviewing the standalone Blu-ray version, which I can only assume is effectively the same as the Bluray included in the 5 disc deluxe set. Just a tad of history first, in 1987 Parsons released a stereo remix of the album which added MARVELOUS NARRATIONS by Orson WELLs along with several other changes which have been liked and disliked by fans. Oddly enough, what we get here is an entire remix based on the 1987 mix in 5.1 surround only, while the stereo 2.0 version is an excellent transfer of the original mix. Likewise the download card provides access to a 24bit / 96k Wave version of the 1976 stereo mix. I would have liked to have seen the 1987 stereo version included as well, or better yet a fold down of the 2016 5.1 mix to 2.0, which is common place for many of the other multi-channel reissues.

Now, let’s get into it, and have a listen to the 5.1 mix which contain elements from the '87 remix. Listeners are likely to notice the deep and slightly heavy bass, which is very evident as the second track The Raven kicks in. A little sub-woofer adjustment solves much of this, and personally I rather like the deep bottom. Purists will also notice the drum gated reverb that has brought the snare forward in the mix while altering its natural sound that listeners have heard on the original mix over the past 40 years. Also, I will mention further down about new guitar solos that were added back in 1987. OK, having noted those differences, truly the surround mix is amazing, and I am delited I picked up this Blu-ray.

Yes, I miss the peaceful slow instrumental introduction “For a Dream Within a Dream,” which is now partially masked by Wells narration. Yet, I also love the narration as it sets the stage for the story. Orchestral and synth parts come from everywhere, engulfing the listener with the mesmerizing soundscape., Even the narration spreads from the center across every speaker, decaying to the back channels.

As noted before the 1987 elements become noticeable on the second track The Raven, such as the reverb on the drums, the addition of a guitar solo and riffs, these create some masking of parts longtime fans are so familiar with from the original mix. I get it, they add energy that was formerly not there, but clearly alter the original masterpiece. Choral parts swell from the rear channels while the primary energy pours from the front channels with synths delayed across the soundstage making for an invigorating 5.1 mix.

More 1987 elements are added into the “Tell-Tale Heart,” thankfully orchestral parts are ever present and the surround balance is wonderful. Bird like sounds crow from the rears pushing toward the front and there are some cool left and right balancing of vocals in the middle of the track. However, the guitar solo feels constrained and thin compared with the original. Maybe the 80’s digital recording just doesn’t translate as well as the analog 70’s multi-track recordings.

“Cask of Amontillado” begins with the piano and orchestra parts in the rears. Vocals fall across all three front channels, with marginal use of the center. This intense mix drives the listener deep inside an immersive aural ecstasy as it climaxes.

Are you looking for an incredible orchestral surround experience? You’ll find it here on the various parts of “For the Fall of the House of Usher.” Strings swell from the rears while cellos bellow from the front. The mix is very airy and elevates the listener into a warm space filled with magnificent dynamics. I was surprised to read how some fans skip this track, especially when this is a surround enthusiasts dream come true. Maybe this is akin to what the symphony conductor hears. I guess I should have become a Meister! Truly that exciting. I am sure you’ll dig the rain and drum parts that seemingly glue to you during this dark section.

This is absolutely a stunning and amazing mix! You must get this Blu-ray for the surround version alone, unless you hate the 1987 parts that were added. For those seeking only the 1976 stereo version in hi-resolution, you could hold out for a download or grab this Blu-ray before it goes out of print. Parsons really did an excellent job of transferring the 2.0 version as well as creating an all new 5.1 mix. Now, fans like myself can hope for more Alan Parsons Project releases in hi-res multi-channel, until then you’ll find me sitting in the sweet spot entranced by Tales of Mystery and Imagination.