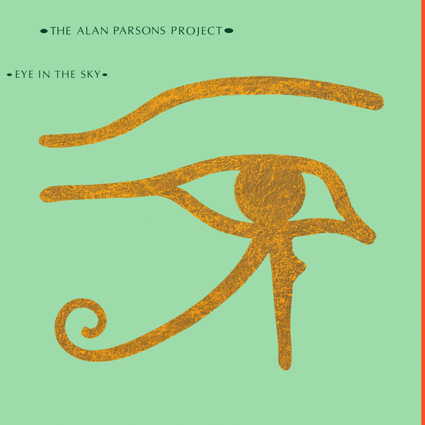 Celebrating the 35th anniversary of Eye in the Sky, Legacy Recordings has released a super deluxe edition of the Alan Parsons Project’s 1982 platinum masterpiece. The box set features rare and unreleased material, but reviewed here is the 5.1 remix of this classic progressive Alan Parsons Project album available on stand alone Blu-ray.

Alan Parsons created this multi-layered aural tapestry as a conceptual musical meditation covering a range of surveillance systems, such as casino cameras, satellites circling the earth and the all-seeing eye of the Egyptian God Horus. Truly proving to be both timely and timeless, Eye in the Sky has become a remarkably forward view of art, religion, politics and culture in the 21st century.

For collectors seeking everything, the deluxe edition contains 3 CDs which include the original album plus bonus tracks, a disc of Eric Woolfson’s songwriting diaries, and the last disc contains previously unreleased material. The Blu-ray features the all-new 5.1 surround sound and stereo mixes in Hi-Res audio of the original album. Plus, vinyl collectors will be please to know the set includes 2 vinyl LPs of the original album newly struck at half speed on four sides at 45rpm at Abbey Road Studios by Miles Showell. Also, there is a flexi-disc replica of an original 1982 promo, a 60-page hardback book with previously unreleased images and newly penned essays, along with an Eye in the Sky poster and postcard.

When the stand-alone Blu-ray was released in August 2018, I picked up a copy of this anniversary edition of Eye in the Sky, as naturally my focus remains aimed at the 5.1 surround mix available in both DTS-HD Master Audio and LPCM 96-kHz / 24-bit audio. Parsons has long been a proponent of surround sound, with his latter-era solo albums including 2001’s On Air and 2006’s A Valid Path each getting immersive 5.1 treatments. Of course Parsons has been a long-time advocate of immersive listening experiences taking quad to new heights with his acclaimed mix of Dark Side of the Moon.

The recording quality of Parson’s albums have always been top shelf, with incredible clarity and high attention to detail of the balance and tonality. Eye in the Sky is pure magic for listeners who yearn for ear candy and demonstration worthy tracks. The 5.1 mix propels this beloved album into a magnificent sound stage that completely fills all corners of the room. I found that I preferred the LPCM 5.1 codec over the DTS-HD MA, as it provided a slightly airier feel with no noticeable coloration difference.

The short intro throbbing piece “Sirius” opens the album filling all channels with the Fairlight synth up front and swelling strings plus patterned guitar riffs falling in the back. Chicago Bulls fans likely will recognize the opening powerful instrumental stadium anthem, which along with their hit song “Eye in the Sky” propelled the Alan Parsons Project into worldwide fame. The 5.1 mix is so detailed, that even with multiple listens the discovery of subtle changes in vocal and instrument location reveal themselves as I listen to the title track again. This subtle movement shows a pure mastery of the surround scape, without being gimmicky nor overly zealous with the mix.

I generally feel the dynamics are very good, and given the era of the recording, I am delighted that the drums, and specifically the snare, has not been placed into a gated reverb nor big drum sound. Rather each component of the drum kit is clear and distinct with no element overshadowing another. Cymbals and the hi-hat tingle and shimmer, while the kick drum pumps out a crisp thump.

Stepping back into their progressive rock roots, the incredibly dynamic piece “Silence and I,” showcases Woolfson’s vocals stretching from the front center channel across the room to the rears. High drama kicks in as the orchestra swells all around with strings, horns and guitar solos finding a comfortable space within the mix. The highs are brilliant with out being sharp, and the mid-range doesn’t seem congested as parts spread out across the soundstage.

As I have noted above, there seems to be a very high level of attention paid to the recording of the studio multi-tracks, and I don’t hear a trace of noise or unwanted distortion. This is truly a demonstration audio disc. Of course, not only does the stereo LPCM 192kHz / 24-bit codec flatten the overall soundscape, but it is important to note that this is a transfer of the original 1982 analog stereo master . While Parsons and P.J. Olson did an excellent job at keeping true to the original stereo mix when they created the 5.1 mix at Parsonics in April 2017, there are distinct differences, such as a more prominent snare drum on the stereo mix. As I don’t have an earlier version of the 2.0 mix, I can only say that the Blu-ray high resolution edition sounds excellent to my ears.

Although much of Eye in the Sky has a pop rock leaning, these are all well crafted songs and I still consider the Alan Parson Project a progressive rock group. The final track, “Old and Wise,” feels proggy building dramatically around Colin Blunstone’s weary breathy vocals which are spread wide across the front speakers and magnificently supported by Mel Collins’ sax solo alongside Powell’s orchestral brass combo in the back channels.

The stand-alone Blu-ray is a clear must have for fans of Alan Parsons and multi-channel audio enthusiasts. Prog-rock lovers may find this album leaning a bit too far into the pop world, yet there are a few fantastic progressive rooted tracks that make this album worthy for your prog-rock collection. The mix is truly stellar, providing an immersive listen, but unless you are a completist or this album is one of your all-time favorites, it is probably best to stick with the stand-alone edition instead of shelling out for the super deluxe version.

Get the Deluxe Edition here:

Get the Stand Alone Blu-ray here: