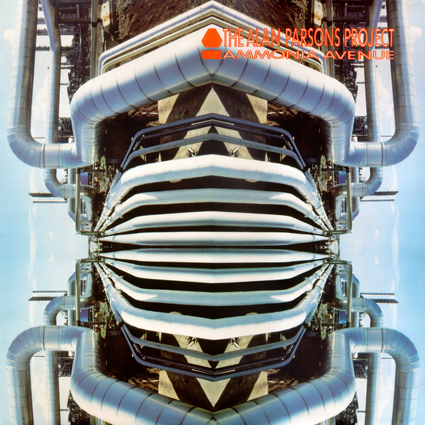 Continuing their reissue campaign featuring all new surround sound mixes, the Alan Parsons Project has released their seventh album Ammonia Avenue as a remastered super deluxe 3 CD, 1 Blu-ray and 2x12” vinyl edition with 53 bonus tracks and 2019 5.1 and stereo mixes. Also, a standalone single Blu-ray edition containing the 2019 5.1 and stereo mixes was made available at the same time.

Parson notes that the inspiration for the album title came from Eric Woolfson’s visit to the ICI Chemical plant in Billingham, England after meeting ICI chairman Sir John Harvey-Jones on a return flight from New York. While visiting the plant, Woolfson saw a long street called Ammonia Avenue that was devoid of people and trees and instead was dominated by miles of pipes.

The 1984 album features many Alan Parsons Project regulars including Ian Bairnson, David Paton, Stuart Elliott, Colin Blustone, Chris Rainbow and Lenny Zakatek. The super deluxe box set features 53 bonus tracks drawn from Eric Woolfson’s song-writing diaries, studio session out-takes and the all-new 5.1 surround sound & stereo mixes from the original multi-track master tapes by Alan Parsons plus the promotional videos of “Don’t Answer Me” and “Prime Time.” Also housed in the box is a lavishly illustrated book with a new essay along with unseen photos featuring recollections from Alan Parsons and members of the group. Collectors will also find a reproduction of a press kit folder plus a reproduction poster.

Now let us dig into the sound and mixing review of the stand-alone Blu-ray edition. I first have to note the differences between the two 96kHz / 24-bit surround codecs, the DTS Master Audio codec and the LPCM version. I generally feel they are identical, yet I sense that the LPCM codec sounds natural while the DTS MA codec seemingly is sterile. I can honestly say that the vast majority of audiophiles will not notice any difference at all, it is very subjective, and likely based on listeners equipment and the uniqueness of each of our ears. In other words, for me, the LPCM version simply sounds more open and smoother. Thus, this review is based on the LPCM 5.1 version found on the stand-alone Blu-ray, along with the only stereo high resolution edition also presented at 96kHz / 24-bit LPCM on the same disc.

From the moment the album starts discrete elements emanate from all corners of the room. Drums and bass naturally are spread across the front and center speakers while keyboards and guitars are placed in the left and right channels. Vocals are perched in the center and backing vocals along with additional keyboards and guitars fall to the rears. The mix is essentially conventional, yet by its open layout, it sounds outstanding.

All aspects of the drums are incredibly distinct, with a pronounced gutty snare and a crisp hi-hat. Guitar solos and riffs evoke a slinky smoothness, detailing every nuance with tingly rhythm guitar and keyboard parts that absolutely shine through. The overall transparency of the mix is fantastic, bringing this release to reference quality. Vocals are completely natural as if the singer is performing right in the room.

As the tracks play, images slowly rotate on the screen, providing some nice visual eye candy. Similarly, the drum sounds and instrumentation vary from song to song, with characteristics of mid 80’s studio effects defining the piece. Check out the drums that spread widely across the front channels on “One Good Reason” adding crunchy clapping with the tom toms striking at the outer edges. Likewise, keyboards pour in heavily from the back left channel exemplifying the surroundscape.

Some fans have commented that the mix is a bit bright. I generally do not agree, from my sweet spot I hear an extremely well-balanced mix that is somewhat lacking in lower end warmth and fullness. I acknowledge that during this era as compact discs were gaining in popularity over analog media, engineers began to emphasize the mid and upper range frequencies. I am not going to debate on the rationale of mixing engineers during this era, but I find releases from previous eras often lacked the brilliance that is so evident during live concerts, instead I have noticed that audio engineers during those earlier eras typically opted for a hazier top end. From my perspective, this remix of Ammonia Avenue strikes the balance across the frequency spectrum exceptionally well, offering an amazingly clean and natural sound on the Blu-ray edition.

An absolute highlight on the album is the track “Pipeline.” Listeners are fully immersed in the surround sound with parts delaying across the soundstage. Strings, guitars, and synthesizers emanate from all corners, giving a wonderful separation that aids in defining each element. I revel at the sax that soars from the front speakers showing off the instrument’s pure natural timbers in extreme detail. I suspect that for long time Alan Parsons fans, like myself, this progressive leaning instrumental piece is precisely what keeps us all coming back for more of the Project’s fantastic music.

Yet the spectacular aspects of Ammonia Avenue culminate with the closing title track. Here we can fully enjoy the groups masterful songwriting which is a progressive rock lover’s dream come true. To top it off, the discrete aspects of this track’s surround mix are remarkably engaging, making this an excellent choice as a reference demonstration peace when showing off the capabilities of your system and enticing your buds to embrace surround sound music mixes. Take note to the lush orchestration which elevates the dynamics of this piece that starts out so subtly with the piano and vocals upfront. The spatial characteristics surrounding each part is another testament to why high resolution audio is so beloved by our niche group of listeners.

For fans possessing previous stereo editions, I must say that there is a night and day difference between the compact disc I have on hand and the high resolution remix. Parsons has taken great care to expertly balance the instruments and mold the spectrum to define each part. In some cases, the location of an element has changed, and the ambience is clearly unique between the original and new mix. For purists who are accustomed to the 1984 mix, the new one is revealing and is absolutely punchier on the lower regions with some seztyness in the upper range. Still I found that I strongly prefer the surround mix, as it is significantly more open, with incredible depth and separation. The new stereo mix, while a vast improvement over the original, has diminished depth and lacks space by the obvious function of its design. This would be a perfect disc for stereophiles to move into the world of surround.

Strongly recommended for fans of Alan Parsons Project, progressive music collectors, and pop music enthusiasts. Undeniably a must have for surround sound aficionados, Ammonia Avenue is one not to miss for its mix and sound quality.