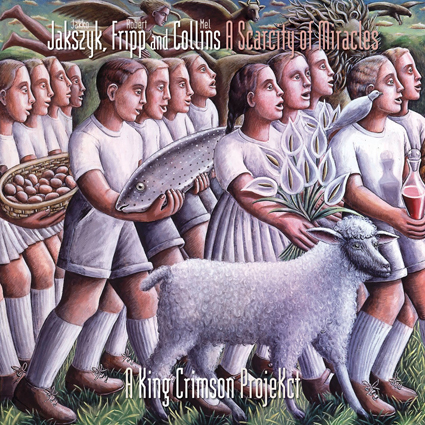 Honoring a great band's legacy, whilst undoubtedly taking it somewhere new, A Scarcity of Miracles is the King Crimson related album your mellower friends may just fall in love with! Don't expect the heaviness of Thrak and the well known KC releases during the 80's.
This ProjeKct is the debut release from Jakko Jakszyk, Robert Fripp, and Mel Collins.Featuring a dream rhythm section comprising of Gavin Harrison and Tony Levin, ASOM is a sonically rich and detailed collection of accessible and heartfelt songs which draw you in on the first listen. Echoing elements of King Crimson's unique sound, ASOM presents a unified group sound far removed from anything previously released under the KC name, A Scarcity Of Miracles manages to be both intimate and epic, complex yet immediate.
When Fripp (King Crimson founder and guitarist) and Jakszyk (Level 42) got together in February 2009 neither expected that their initial sessions of guitar-only improvisations would result in a full-blown album, or that it would ultimately be deemed to be a King Crimson ProjeKct. As the material from those first sessions developed, it was obviously becoming much wider in scope and scale. The arrival of sax player and former King Crimson member, Mel Collins, added further colour and texture to the emerging songs. The line-up was completed with the addition of bassist Tony Levin and Porcupine Tree's drummer, Gavin  Harrison,  whom were both members of the 2008 incarnation of King Crimson, adding their parts to the material in their respective studios.
You will want to get the deluxe cd / dvda version (which features a 5.1 mix, 24/96 stereo, and the ASOM video, and an album's worth of alternate mixes and improvs from the original sessions).
Long time King Crimson listeners may find this album disappointing.  There is a clear edge of pop to the first couple of tracks.  Yet, this is very well written and executed pop, that undoubtedly has its roots in progressive rock.  Steve Wilson has brought his talents to the mixing table, providing a fabulous 5.1 surround sound mix.  The depth and clarity of the instruments is excellent, along with some real nice mixing moves that direct the listener to specific areas of the room.  Tony Levin's bass grinds at the bottom end, showing off the strength of your sub-woofers.  Fripp and Jakszyk's guitars glisten and take much of the movement in the mix.

Fans who enjoy the early King Crimson albums wil find the return of sax player Mel Collins really distinguishes the album from many other releases.  The sax carries the listener through the songs, which are surprisingly heavy on vocals.   Watch out though, some listeners will find the last two tracks, "The Other Man"  and "The Light of Day" very difficult to sit through., drive or work by!  These pieces take you on a journey that is far removed from pop and even progressive rock music.  The final track specifically sounds very eerie and a bit dissonant.

Don't miss the session extras available on the deluxe version.  These are literally worth the price of admission, as they show the roots of how A Scarcity of Miracles came together.  Additionally, the two lengthy session tracks allow listeners to experience two great musicians using their improvisational talents.  A definite extension of Frippatronics.

While you will need a  surround sound system to enjoy the 5.1 mix on the second disc of the Deluxe set, you will only need a DVD player to hear the DTS 5.1 or LPCM Stereo mixes.  Audiophiles will find both MLP Lossless 5.1 and Stereo mixes to spin on there DVD-Audio players.  The only question this reviewer has for the producers is why the deluxe version wasn't released as a Blu-ray Disc.