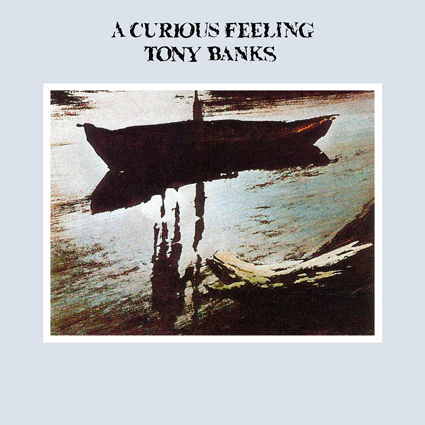 Originally remixed and reissued in 2009, the special edition CD & DVD version of Tony Banks classic album “A Curious Feeling” from 1979 quickly went out of print. This sent prices out of this world, and fans like myself who missed the first run were seriously bummed we didn’t grab a copy sooner. However, the Genesis keyboard player & writer, Tony Banks, in conjunction with his current label Esoteric Recordings have brought it back, and once again hi-res and 5.1 surround sound mix fans can easily afford to enjoy the multi-channel mix by Nick Davis and Tony Banks along with 2 promotional videos

Initially released by Charisma Records “A Curious Feeling” was Inspired by the novel "Flowers for Algernon” by Daniel Keyes.. Recorded at Polar Studios, Stockholm, when Genesis was on a brief hiatus following the bands "And Then There Were Three” tour, this magnificent work features contributions from drummer Chester Thompson who played for Genesis concert appearances, plus vocals by Kim Beacon.

Including the instrumental “The Waters of Lethe” and the song “For a While,” stylistically the album is on par to anything Banks composed for GENESIS and among the album’s highlights. Totally remixed from the original master tapes by Nick Davis, who remixed the entire Genesis catalogue a couple of years earlier in 2007, along with Tony Banks, resulting in a 24-bit / 96 kHz stereo mix with significantly more dynamic punch and of course the surround sound mix that fully envelops the listener.

Banks planned to make this album his own by playing all of the instruments, but ended up asking Genesis tour drummer Chester Thompson to play the drum parts. He also selected Kim Beacon and his somewhat raspy voice to handle vocals. This left everything else, including what little guitar there is, to be played by Banks himself.

While I don’t have an original LP on hand, I sense that much care has been taken to clean up the mix and bring new life to both the stereo and 5.1 versions. Natually this is a keyboard centric album, with plenty of layers that spread around all corners of the sound stage. Kim Beacon’s vocals are nice and clear making it easy to hear him annunciate the words quite well. Percussion is snappy with plenty of air along with a nice tingle from the cymbals and thump from the kick. Keyboards are lush and are predominately spread across the front channels with awesome swells and second parts placed in the rears. For me the bass is a bit too round, somewhat muffy, yet is not over bearing, generally fitting in well with the overall mix.

Overall mixing engineer Nick Davis has created a delightful sound across the whole album, providing a vibrant multi-channel version. Those who appreciate Davis’s surround sound work on the Genesis catalogue are likely to appreciate his mix of A Curious Feeling.

Noteworthy is the song After The Lie, which has dramatic tension, and keyboard solos that are absolutely on par with some of the Genesis material. Chester Thompson's drumming is exceptionally strong during this piece, and the new mix really brings that out. It is very easy to hear the squeaky sounds that Banks uses on the instrumental track Forever Morning. Differing from much of the other songs the title track A Curious Feeling is a light-footed pop song that pleasantly lifts your spirits. The new mix brings out effects that may have been otherwise missed, continuing to demonstrate how good the 2009 mix actually is.

For those who prefer stereo listening, the 24-bit / 96kHz stereo version is sonically comparable to the surround, excepting the obvious lack of discreet separation across additional channels. Also take a moment and watch the promotional videos of For A While and The Waters Of Lethe!

If I haven’t made it evident enough, this album is a masterpiece and sounds great fsin 5.1, it is simply a must have for all fans of Genesis and prog-rock. It still has a special place in Tony's heart as you can read in the liner notes, so pick up your copy before it goes OOP again.