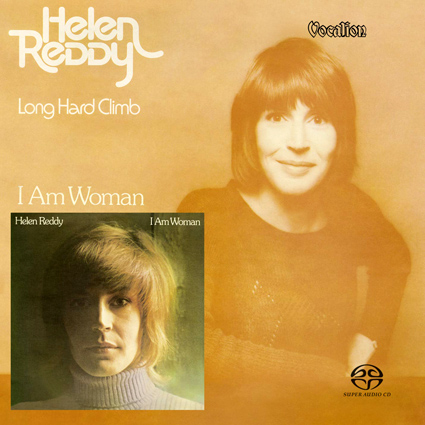 In the early 1970’s at the time of Helen Reddy’s initial run of seven albums that went gold or platinum, I was a long way from the Popular sounds of Adult Contemporary music. While the title track of her 1972 release “I am Woman” hit #1, my ears were tuned elsewhere, specifically dialed into AM mono radio. At my young and innocent age, I had left stereo FM merely for the sophisticated classical listeners, and quad was no were in my sphere.

Meanwhile, this smooth set of tunes that brought Reddy into the limelight had been mixed into quad and released on vinyl. Part of the strength of the I am Woman album can be attributed to writers Don McLean, Leon Russell, along with Barry Mann and Cynthia Weil who helped pen other hits including “Peaceful” and more among this fine collection of light popular tunes and ballads.

The following year Reddy release “Long Hard Climb,” featuring the hit “Delta Dawn.” However, at least half of the songs had been released by other artists, such as Buffy Sainte-Marie’s “Until It's Time for You to Go.” Depending on your style preference, these tracks may either excel of fall short of their counterparts, a risk artists always take when covering music by another performer. This album also was placed into the quad world, and now nearly a half century later Michael Dutton has reissued both on a single Hybrid Quad SACD which also contains a stereo DSD layer, as well as a CD layer too.

Among all of the impassioned moody string and horn infused ballots and pop songs with Broadway and jazz leanings, Helen Reddy has placed an indelible mark on the 1970’s pop world. Obviously now years later, I have grown into an adult, and contemporary has become something closer to classic, thus albums like this have entered my sphere. Based on previously remasters by Dutton, quad enthusiasts should expect an excellent transfer from the original analog master tapes into the digital domain for this Vocallion Records release. Recommended for fans of Helen Reddy, popular adult contemporary enthusiasts, and discrete surround collectors.