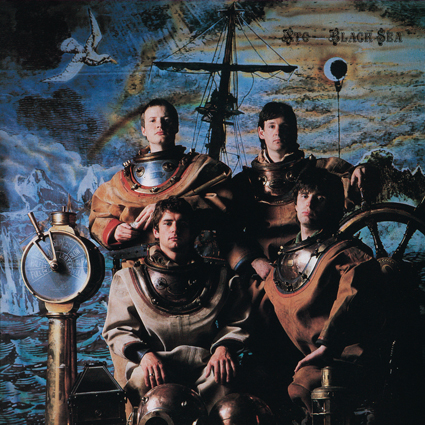 On their fourth album “Black Sea,” XTC directly approaches sociopolitical concerns as a humanistic response to the circumstances. Maintaining the new wave big drum sound from their previous release “Drums and Wires,” XTC adds polished arrangements that lend to their 60s pop sensibility from becoming too heavy. Black Sea contains some of their finest songs, including “Generals and Majors,” “Respectable Street,” and “Towers of London,” each of which were probably played on M-TV thousands of times, and now you can relive those early days of music videos with a press of a button.

Black Sea is undeniably the bands most consistent album and their most commercial-sounding, and a perfect example of some of the amazing music released during the new wave movement of the late 70’s and early 80’s. This expanded deluxe set not only contains the original album in its original order newly mixed in both 5.1 and stereo by Steven Wilson, but several additional tracks have been added in both 5.1 and stereo including “Smokeless Zone,” “Don't Lose Your Temper,” and “The Somnambulist” all found on the Blu-ray disc. Instrumental versions of the entire album and several additional tracks are included all in stereo ready for your Karaoke parties. Tacked on at the end are six studio recordings and demos featuring composer, guitarist, and vocalist Andy Partridge.

This is the fifth in a reissue series of XTC albums remixed from the original multi-track studio tapes which have ben expanded and include both surround sound and stereo mixes by Steven Wilson with input from Andy Partridge and fully approved by the band. The Blu-ray contains 24bit / 96kHz in both LPCM and DTS HD Master Audio in your choice of 5.1 or 2.0. There are several defining differences between the original flat transfer and the newly mixed stereo version, the most obvious is the boost in overall volume, and even a subtle change in tonal balance. There is greater punch in the upper mids that spice up the guitars and lend some snap to the snare and sizzle to the cymbals. Kean ears will also notice minor adjustments in the overall mix among the various parts, much of which improve the sonics when compared to the original stereo mix.

Of course, as my readers know, it is the surround mix that really catches my attention, and Wilson absolutely delivers a stellar 5.1 mix here. After the piano and voice open the album overtop the crackling vinyl sound, the full band kicks in from all channels on “Respectable Street.” As is common with Wilson mixes, the primary energy of the band is spread across the front channels. With great ease the rear channels soak up the reflections of the rhythm guitar that strikes from the left main channel and the snare snapping out from in between the fronts. Partridge’s vocals distinctly take the center channel and the backing Oo’s and Aa’s fall nicely in the back. Excellent ear candy sends the guitar break out into the room, swelling in the rear channels before returning up front as the jangly section ends.

Expanding on the immersive side of the surround sound mix, “Generals and Majors” wraps you with the instrumental melody line from the back channel while the band marches out the heavy hitting rhythm up front. There are plenty of parts to spread around the room, with backing vocals asserting from the rears and whistling spreading out from the back left channel. The slightly buzzy 60’s like guitar riff among other parts are wonderfully transparent. Overall I found the mix to be extremely well balanced across the spectrum, and other than my personal distain for the big snare drum sound that was so prevalent during this era, I find Black Sea to have an excellent aural palate.

While my passion is music, I maintain a focus on surround sound releases as they provide an all encompassing listening experience. Like the uniqueness of art, I continue to seek out releases that find creative ways to use the entire soundstage, knowing that each mix adds a different dimension to the music. Naturally the music lends itself to the mix style, and XTC gives so much that one can easily find aural ecstasy.

With the above in mind, “Living Through Another Cuba” absolutely takes this aural experience to new heights. Not only are you surrounded by vocals melodizing the title, take note to the whistle that repeatedly blows across the space from front to back, and check out the incredibly chunky guitar placed in a open room cranking from the front right channel. Unusual to many Wilson mixes is the wild movement of drums and reverberant slaps of vocals at the tail of the song, enough to make your head spin with aural delight.

Instead of describing it all here, I much rather allow you to listen to all of the amazing detail placed around the 5.1 mix. Certainly the original flat transfer is a wonderful step up from the CDI got years ago, and the Wilson remixes are truly remarkable, giving new life to an already fabulous album. Transients, upper end clarity, and bottom push definitely add to my joy of listening to Black Sea. But, there is much, much more.

Beyond the 11 original tracks, another eight alternate versions and additional songs have been added as a separate chapter on the Blu-ray, mixed in both stereo and surround. From a technical viewpoint, the Blu-ray has been authored for stereo first, meaning that one must reset the audio options when the chapter advances. This automatically happens when starting playback of a chapter that precedes a later chapter, which as a surround first listener is a disappointment. I would rather have the chapter stop and wait for me to continue the program instead of switching codecs.

Speaking of codecs, consistency is finally becoming more common, as there was no appreciable difference between the LPCM and DTS-HD MA 5.1 codecs that I noticed. This is excellent, as now I feel very comfortable knowing that the sound conveyed on the Blu-ray is what was intended by everyone involved in the remix process.

The remainder of the Blu-ray contains a plethora of stripped down stereo mixes of early versions of songs written for Black Sea, which most likely are of interest to musicians and absolute XTC fans. I always find these fascinating to hear how a song develops, much like seeing an artists initial sketch of a masterpiece. There are also six studio tracks from a couple of different sessions which I feel are true gems for XTC and Andy Partridge fans. Plus remember to get into your M-TV mood and flick on the three videos, albiet in stereo only, yet the videos really are a wonderful representation of the era, This CD + Blu-ray deluxe edition is very fairly priced when considering the massive amount of content included, and continues the same clamshell packaging as the previous four releases in their reissue series.

If I haven’t made it clear yet, Black Sea by XTC is an absolute must have for surround sound enthusiasts, and is certainly required listening for XTC fans. I am thrilled to add this to my collection and honestly see it getting a lot of play due to its pop-leaning energy driven stellar mix.