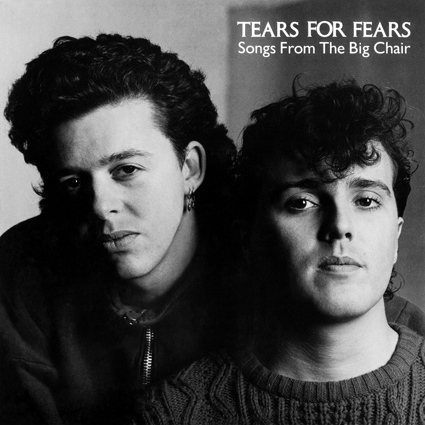 Tears for Fears top -selling album, “Songs from the Big Chair” gets the full deluxe treatment via Universal Music Enterprises. New wave fans loved this album out of the gate, which included classic songs like “Everybody Wants To Rule the World,” “Mother’s Talk,” “Shout” and “Head over Heels,.” While there were other high-resolution formats versions available in the past, this spectacular 2014 edition comes in five formats, including a six-disc super deluxe edition box set featuring previously unreleased material and a new 5.1 surround sound mix by Steven Wilson.

Contained within the six disc Super Deluxe edition fans will find four CDs with plenty of bonus material such as remixes and previously unreleased tracks, along with two DVDs, the first containing the various audio formats, while the second contains various video material. This edition also includes a 30 page replica 1985 tour program and a 32 page booklet. There is also both a single and double CD Deluxe edition, and for audiophiles a 180-gram vinyl album, and finally a High Fidelity Pure Audio Blu-ray edition.

The super great news for high resolution audio fans, is they won’t need to break their wallets just to obtain the best quality audio and multi-channel version. This review is based on the price conscious HFPA Blu-ray version, thus if you want to know about the six disc deluxe set, sorry, it’s not reviewed here.

It becomes immediately apparent that the multi-channel mix of “Songs from the Big Chair” is fantastic. With percussion spread across the front channels followed by a “wake-up” percussive bell from the right rear and answered in the left rear channel, Wilson has masterfully assembled an engaging mix of this classic New Wave pop release. As the lyrics are sung from the front center channel, “Shout” slowly builds dynamically with many layered parts filling in the spaces around the entire sound stage. Synth parts emanate from the back channels, while additional voices appear from all corners, and the drums and percussion drive the song, hitting everywhere around the mix.

The audio quality from the original recordings are superlative and were flat transferred from the multi-track tapes to create the 2014 5.1 surround mix. I found the balance between the instruments, voices and percussion to be exceptional, with a very full, yet not over bearing bottom. Guitar and synth parts are crisp and slightly brighter than the typical fuller sound found on albums by similar artists from the previous decade. The 80’s were an entirely new era for drums with the introduction of digital effects, and have been tastefully used on this recording. Wilson has masterfully reproduced the mix while broadening its depth for the surround sound experience.

While I won’t tell you which should be your preferred codec, there are distinct differences between the DTS Master Audio and PCM 5.1 versions. The decay of the reflections is more evident on the DTS version, thus allowing for the separation and distinct location of the various parts to be more apparent on the PCM version, as they don’t appear to be placed in as much space as the DTS version. There are other subtleties, such as a tighter bass on the PCM version, yet both codecs have their appeal and provide a wonderful listen in surround. It is worthy to note that the 2014 stereo re-mixes sound amazing too, with voices and parts stepping forward from the speakers and grabbing the listener in their space, and of course fans can access the original stereo mix on the HFPA disc too.

“Everybody Want to Rule the World” is another pop classic with a steady drum beat. Common for many of Wilson’s mixes, the primary energy is up front, with secondary parts falling to the rears, and most of the back channel source is the delayed reflections from synths, voices, and drums, which creates a very full multi-channel listening experience.

I really appreciate how the keyboards are placed in the front left channel and reverberate off the right rear channel on “Head Over Heels.” Counterpart instrumental melodies are placed across the back channels, and the Na-Na-Na singing voices feel like they are coming from everywhere before the break in the song.

Fans also receive a 96kHz / 24-bit FLAC download of both the new and original mixes when they register for a free account at hfpureaudio.com. While the Blu-ray doesn’t contain any bonus material or other alternate mixes found on the Super Deluxe edition, fans receive the complete album in the best audio quality available to date.

Strongly recommended for new wave fans, high resolution and surround sound audio enthusiasts. This is an excellent disc to show off to your friends, and given the popularity of the band, one of the most recognizable remixes Steven Wilson has done to date.