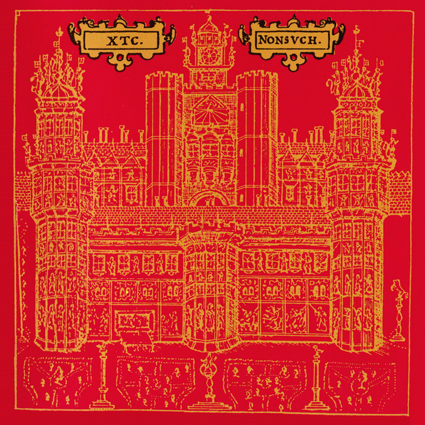 In October 2013 XTC reissued their 1992 album Nonsuch by the Ape House imprint in both CD/DVD-A and CD/Blu-ray formats. Fans have been excited by the bonus tracks, along with the new stereo and surround sound mixes from producer Steven Wilson.

Yet XTC fans may be scratching their heads over the choice for the inaugural release in the new surround sound series of reissues, which starts with 1992's Nonsuch. I can only assume that this could be one of Steven Wilson's favorites, since this was the group's last for Virgin Records and overall was a huge disappointment for the band sales-wise despite its artistic high-water status and an album that the band considers a crowning achievement.   Or maybe it was the title which Andy Partridge explains in the liner notes that he was surprised to learn that Nonsuch doesn't mean non-existent or never existed but instead it actually means "A person or thing that is perfect or excellent."

Producer/engineer Steven Wilson offers a fantastic new mix that corrects the overally bright Geffen CD.  It is possible that this is the first all digital multi-track classic album Steven has remixed, giving the album a warm tone, rich bass and a much needed rebalance that  compliments the multi layered recording.

But, of course it is the surround sound mix we are most interested in.  I picked up the deluxe edition with the Blu-ray and CD version of the album, and that is really what you want to get. Packaged like the King Crimson 40th Anniversary series, it includes a booklet and the two discs in a slipcase gatefold box.  The Blu-ray Disc contains the various incarnations of the album including: 24-bit, 96 kHz high resolution stereo LPCM and 5.1 surround sound mixes, plus a DTS HD Master Audio surround sound option. There is a complete instrumental version of the album for your Karaoke nights -- really how else are you going to get your friends to hear your awesome sound system?  Also there are a full set of demos by songwriters Andy Partridge and Colin Moulding that provide a wondrous insight into the development of the tunes, along with two promotional videos.

The surround mix is pretty amazing and tastefully immersive, The music doesn't lose its tightness while generously taking advantage of the surround channels. The opening track, "Peter Pumpkinhead," spreads Dave Mattack's drums enormously wide, providing a really huge sound, with harmonica and  harmonies placed in the rear channels. Like the new stereo mix, Colin Moulding's bass is pronounced with a resilient grumble and warmly fills the bottom compared to the original 1992 mix.

The surround mix of "My Bird Performs" is gently immersive with snare and tom tom drums percolating in the rear speakers. The guitars mid tones are smooth losing the original mixes thin and bright sound quality.   "Humble Daisy" takes us back to a melancholy Beach Boys sound, with dreamy vocals placed around the room with the guitar hitting the downbeat from the front left channel and nicely plucked guitar in the front right channel, while the mellotron takes the space centered in the rear channels.

Wilson paints each song with their own soundscape, placing instruments differently from track to track, keeping the multi-channel mix alive.  This mixology is very clear on "Crocodile," with guitars jangling from the rear channels with solos coming from the front, along with hard hitting drums that slap off the back wall.

Cymbals swell from the rear channels, while voices softly reverberate from the front center channel to the back on "That Wave."  Guitar riffs squeal from the front left channel and soar to the distant back.  At the time of this writing "War Dance" is my favorite tune on the album.  The acoustic guitars are placed in between the front channels, and another in the left rear.  Bass, and drums are up front, with main vocals in the center channel.  Synths and other instrumentation appear from the back channels, creating a very encompassing mix.

Featuring sophisticated pop music with a distinctly British flair, Nonsuch is definitely a worthy album to revisit.  Highly recommended for hardcore fans of the band and surround sound enthusiasts.

Audio CD and either a DVD-Audio or Blu-ray which includes a 5.1 surround sound mix.