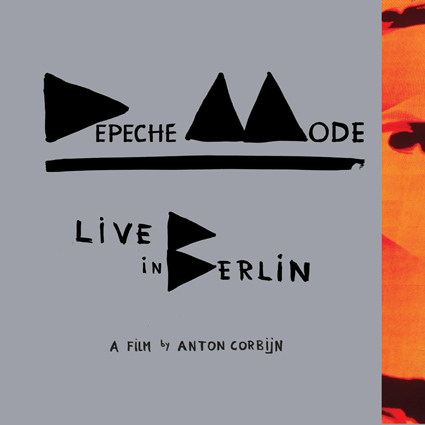 Depeche Mode’s Delta Machine tour was filmed on location at the O2 World Berlin on November 25th and 27th, 2013 and has been released as “Live in Berlin.” The 32 country tour with over 2.4 million attendees supported their 13th studio album, Delta Machine, which debuted in 12 countries at #1 in March 2013.

This deluxe version offers a total immersion that include the 'Live in Berlin' full show on DVD and audio only version across two CDs. The A second DVD also is inter-spliced with behind-the-scenes footage, multiple interviews with the band and their fans, and a 2-song acoustic session filmed at Salon Bel Ami, the oldest existing brothel in Berlin.

However, what makes this five disk deluxe set so intriguing is the 5.1 mix of Delta Machine, their 2013 album presented on blu-ray. I find it very odd to include this surround mix of their previous release bundled with their new live album, yet at least it is now available here.

First a few notes about the Live in Berlin DVD’s which is an excellent example of how Depeche Mode continues to remain relevant more than 30 years after their first album. The set list is exceptionally balanced, and the performance is literally spot on. So this makes fans wonder why Sony only released the show on DVD, when High Definition video is quickly becoming the standard. Likewise, the 5.1 audio is only available in Dolby Digital, another inferior audio codec.

Setting these well founded complaints aside, it is worthy to mention that the filming is fantastic, really placing the viewer at the concert, and surround sound audio mix puts the band in the front three channels with the audience and reflections from the rear. However, I found the PCM stereo mix to be more appealing, with greater punch and a more resonant bottom end. Yet, the multi-channel mix is much wider and certainly provides a aural sensation closer to actually being at the Berlin show.

Wrapping up on the Live at Berlin discs, this deluxe set contains two CD’s of the complete concert, a long with a companion DVD of the entire show. The other DVD also contains the entire show, but is cut with interviews between songs. So, really there are two DVD’s of the live show, a complete waste of a second disc, especially given that I don’t need to hear the commentary, I got this set for the music.

OK, so maybe all is forgiven, especially considering the modest cost for this five disc set. The real gem is the Blu-ray audio disc of their previous album Delta Machine. Here the upmost attention has been paid to audio quality with the inclusion of both LPCM stereo and DTS HD Master Audio versions. Listeners who prefer stereo over multi-channel audio will likely enjoy the 5.1 mix, which pushes the lows to new depths compared to its LPCM stereo counterpart. On the other hand surround sound enthusiasts will find the 5.1 mix to be very front channel focused with very little energy emanating from the rear channels. The back channels primarily contain synth pads mild reflections, and the occasional zippy synth popping up from the right or left side.

While the surround is not elaborate or immersive for that matter, the mix is top notch and the sound quality is exceptionally clear. I absolutely love the excessively deep bass that rumbles throughout “My Little Universe,” and the bubbly synthesizer spreads out from the front center channel moving between the left and right rears as it percolates it’s solo. This and a few other surprises provide some aural excitement to the 5.1 mix.

I am glad to see Depeche Mode continuing to provide their incredible output in surround sound, and while this is not my favorite, it is recommended for fans and completests. The major benefit is the reasonable price of the box set, which effectively includes two complete albums. I can see this auctioning at ridiculous prices when it goes out of print, so if you want it, get your copy now!