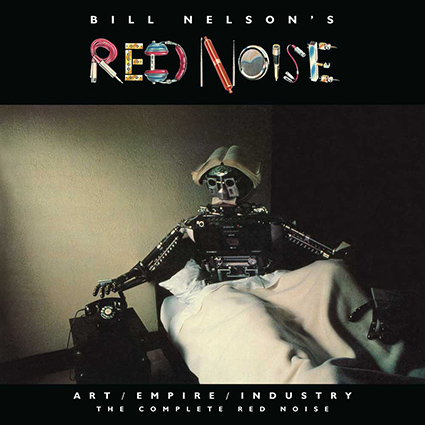 Stepping out from his years with Be Bop Deluxe, Bill Nelson went on to form Red Noise, releasing the Sound on Sound albums with an updated lineup and sound. Now, some 40 years on a box set containing 4xCD’s and 2x NTSC region-free DVD’s include the complete recordings made by this influential band.

Aware of the emergence of the New Wave scene, following the release of Drastic Plastic, Bill Nelson disbanded Be Bop Deluxe. With his desire to continually evolve, he formed Red Noise. Working with co-producer John Leckie, Bill recorded a Post-Punk masterpiece that would provide inspiration to a new generation of musicians and fans alike.

The box includes Sound on Sound remastered and the 2022 Stephen W Tayler stereo and 5.1 mixes. A previously unreleased concert from February 1979 (mixed from the multi-track tapes). Bill Nelson’s 1978 home demos for the album, additional session tracks including BBC session from 1979, plus bonus video content including the Revolt Into Style promo and a 1979 performance on The Old Grey Whistle Test. Also in the box is a book featuring an extensive essay by Bill Nelson and a foreword by Steven Wilson, plus a facsimile tour program, poster and four postcards.