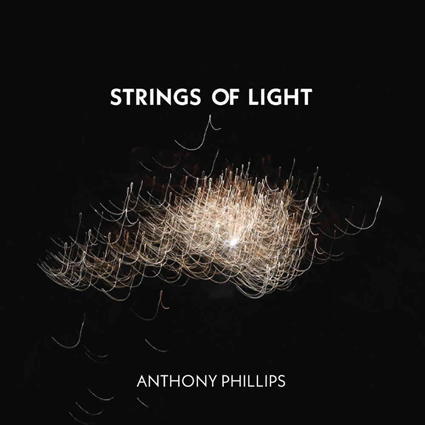 Genesis founding member Anthony Phillips’ 2019 album “Strings of Light” features many of his beautiful and rare guitars from his collection spanning across 2 CD’s of new material. This lovely new album is released on Esoteric Antenna and contains an NTSC region free DVD with 5.1 surround mixes by Anthony Phillips and James Collins.

Long-time fans like myself have been waiting seven years for this next release, and here we find twenty-four compositions, spanning two CDs, undoubtably making “Strings of Light” one of his finest instrumental guitar albums of his long and acclaimed career.

After his lengthy absence of releasing new recorded work, “Strings of Light” is a delightful return and a well-executed album by a legendary musician. Certainly, a good portion of the time during his absence from issuing a new album has been spent remixing and reissuing his back catalogue, several of which have been released in surround sound and contained a wealth of bonus material. But now we can enjoy something entirely new!

Yet, what really can be said about a solo guitar album in surround? One may think of the similarity to taking a mono release and spreading it every which way across the surround scape. Basically, the surround mix provides the ambient space for which the guitar has been placed into, providing a nice depth to the soundstage. In fact, the DVD only contains the multi-channel versions in your choice of DTS or AC3 codecs, both at 48kHz / 24-bit. There are no high resolution stereo versions, indicating to me that the surround version is the preferred way Phillips intended listeners to hear the album “Strings of Light.” He has essentially provided an ambience setting for each piece of music, giving nice space around the closely miced instruments.

What becomes so apparent as one listens to the album is the unique characteristics of each of the many beautiful and rare guitars in Phillips collection that are played across the 24 tracks. Their tonal differences are wide and distinctive, each with a unique voice making for a true aural treat.

While I normally listen at around 80 to 85db, I found it to be much more natural to review this album at around 70db. This gave me a truer volume of the acoustic instruments as if Phillips were actually sitting in my room playing to a private audience. I didn’t bother with the AC3 codec, as experience has shown that they don’t compare to the DTS versions due to the higher level of compression.

The sound quality throughout is very good, with the 12 string guitar spread across the front three channels, seemingly with certain strings located in one of the three speakers. Typically, the back channels merely take on some ambience, only providing spatial depth with occasional vivid reflections when Phillips strikes the guitar during a loud passage. While these are classically driven pieces, they have been newly penned by Phillips for this album. And reflect an expansion of the tender moments he played with Genesis and leading into his Parts and Pieces period born in the 1980’s during the New Age musical movement. Phillips has delivered a solid instrumental solo guitar song collection from the “Caprice in Three,” to “Castle Ruins.” I really enjoy the lush 12-string jangle of “Diamond Meadows” and the gut-string muting finger chase of “Mouse Trip.” Another stand out is the sparkling delicately picked “Skies Crying” where Phillips picks just a single high note in the progression setting the listener’s emotions on edge.

Strings of Light is an incredibly beautiful album with a sensitive musicality and calming effect that ripples throughout the two dozen pieces, making this album a wonderful late evening listen. I especially appreciate how I can so easily hear the many overtones, the nuances of his fingers moving across the fretboard, along with the gutsy sound of the lowest strings as they are plucked on the six string guitar. Likewise, the 12-string guitar floats majestically in front with a nice zing, approaching a dulcimer like sound that is characteristically bright and open. It is all of these details that truly make this album a remarkable high resolution surround listening experience.

Best suited for acoustic music fans, collectors of early Genesis and those seeking a surround experience of solo instruments.