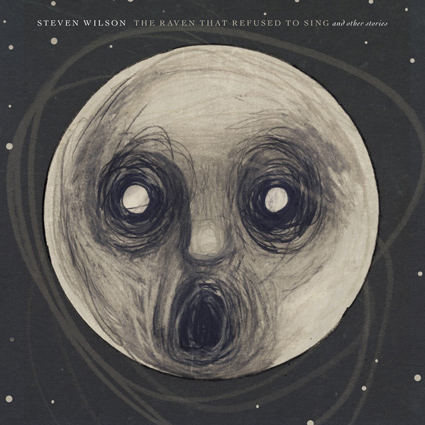 Steven Wilson has released his exhilarating third album, The Raven That Refused To Sing, consisting of 6 songs, three of which are more than 10 minutes each. His current band, which includes some of the world's most respected musicians features guitarist Guthrie Govan, bassist Nick Beggs, drummer Marco Minnemann, saxophonist/flautist Theo Travis and keyboard player Adam Holzman, all who take Steven's music into new and unexpected directions.

I was immediately captivated by the rhythm and groove of the opening track "Luminol," which has a real fusion jazz feel, a bit of a new sound for Wilson.  Speaking of his new band, Wilson recently said in an interview "The whole idea of the band was to try and bring back this idea of the influence of jazz on progressive music." The album starts with hard hitting drums and a thumping bass which dominate the front channels, while the powerful guitar chords, along with soaring single notes are tossed to the back.  The influences of the Discipline era of King Crimson are evident hear, yet when Travis adds his flute the true energy of fusion comes in strong.   But this 12 minute masterpiece draws from every corner of the sonic spectrum, a portion that is carried by aring-modulated gritty Fender Rhodes electric piano, along with Hammond organ, piano and Minimoog, all played by keyboardist Adam Holzman.  The real energy of this and the remaining tracks clearly come from the "old school" approach to recording, since the album was largely recorded live in the studio by Alan Parsons (engineer for Pink Floyd's Dark Side of the Moon), a track a day, with Wilson adding some overdubs after the fact.

For lossless audio enthusiasts it is recommended to pick up the Bluray version of this release, as it likely contains the best sound quality.  While there is a real toss up between the 5.1 DTS HD Master Audio track and the 5.1 24/96 LPCM track, I found the LPCM to be slightly more open and provide a sparkle across the high end that for whatever reason was lacking on the DTS HD Master Audio track.  However, given this impression, purchasing the DVD-Audio format should also yield the same high quality results, although it doesn't contain the DTS HD Master Audio track.  But, for fans who still desire a compact disc copy for their car or other reasons, the DVD-Audio package includes this disc.
The second track "Drive Home" features guitarist Govan throughout, with a gentle feel of Porcupine Tree, carrying the listener into a dreamy state with a clean warm tone. This leads into nearly a three minute enigmatic solo of that builds to the end.   Much of the mix comes from the front speakers, with some tom-toms falling to the side and mellotrons near the back.  Possessing a signature sound of their own, mellotrons were first introduced to give rock groups orchestral textures. Dave  Stewart,  formerly with Hatfield and the North, was brought onboard to write arrangements for the London Session Strings on this track.

Once again, combining both progressive and fusion is very evident on "The Holy Drinker" which is a rocking song leading off with a fusion influenced guitar solo with a Alan Holdsworth feel followed by a ripping moog synth solo.    Cymbal hits come from behind and guitars soar across the front channels.  The song takes a break in the middle with a very haunting undertow, but crescendos to a powerful distortion driven ending that would put any doom metal band on edge.  There is several fantastic uses of the surround sound format with solo guitar punching beyond the front center channel, and a wash of reverb that pushes back and forward with what sounds like howling coyotes at the end of the piece.

The power of song sequencing is apparent on "The Raven that Refused to Sing," likewise the value of treating albums as conceptual wholes is much like a movie, and this album is best heard from start to finish in a single sitting,.  The second to last track,  "The Watchmaker," builds from an acoustic guitar-driven opening, with pastoral soft flute work, leading to a pulsating solo segment for both Travis and Govan, then  building to an angular and riff-driven coda where Minnemann fires away with rapid bass drum patterns and virtuosic power.

Without all of the preceding, the closer and title track "The Raven That Refused to Sing" would not feel like the continuation that brings the album to a fitting close.    I consider this work his best solo record to date and similar to Grace for Drowning, another edition that redefines how both limited edition and the various format releases should be done.

A must have for fusion and progressive rock fans, surround sound enthusiasts, and listeners who are seeking music that truly engages and moves them.

Both DVD-Video and Blu-ray editions are available, but the Bluray has additional material: