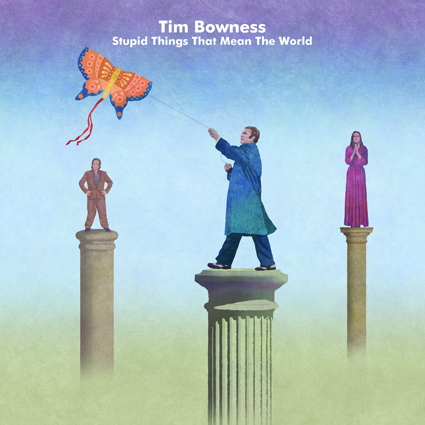 Fans that stepped up and pre-ordered “Stupid Things That Mean The World” by Tim Bowness received an exclusive FLAC 5.1 surround sound download of the entire album mixed by Bruce Soord delivered on the day of release. While I don’t really appreciate marketing gimmicks that create urgency, I get why these exist. However, it seems most odd to me to limit sales of a hi-resolution surround sound version to what is likely a relatively small group of fans who jumped to pre-order the album. Additionally it seems even stranger to not capitalize on the surround sound version by not providing this option on DVD or Blu-ray, or as a separately paid download to fans who missed the opportunity or preferred to first preview the album before making their purchase.

I consider this the best solo release by Bowness, but was somewhat Leary that this second album in two years may be quantity over quality, but clearly I am wrong. There is more direction, engaging instrumentals, along with many guests that add to the overall appeal. Featuring members of the No-Man live band, Michael Bearpark, Stephen Bennett, and Andrew Booker, along with Colin Edwin from Porcupine Tree, plus contributions from David Rhodes and Phil Manzanera, the double CD mediabook edition contains alternate mixes and demos, such as an unreleased 1994 No-Man demo. Alternatively vinyl collectors are advised to grab the very limited hand-numbered transparent vinyl version, in a gatefold sleeve which also includes a CD.

But, if you didn’t pre-order the album, then you’ll only receive the two CD’s and no hi-res 5.1 mix. Since the high resolution version is effectively out of print as of the day of release, I am only going to say a few words about it.

I was surprised that the FLAC is only a 24-bit / 44.1kHz file, versus at least 48kHz or 96kHz, both which are effectively native for studio mixes. I immediately heard a brittle edge, and felt that even though there is plenty of low end, the top range really took over. Yet, the mega positive is the surround mix which makes excellent use of all channels with plenty of action from the rears.

The noise floor is transparent, which is very well suited for the melancholy songs that make up Stupid Things that Mean the World. Soord pretty much sticks to the formula of placing synth and other secondary parts in the back channels with the snare echoing from the front to rears. Lead vocals take their customary place in the center channel with drums spread across the front. An excellent use of the soundstage provides for a relaxing listen that will surely immerse you into the multiple worlds Bowness creates throughout the album.

All I can say for those who missed getting the surround sound version, is let Tim Bowness know how disappointed you are that this engaging mix can’t be shared with more people. Or of course, you could always visit a friend who has a copy and sit down for a dreamy listen.

2 CD edition or Vinyl plus CD.  Pre-Orders thru Burning Shed received a FLAC5.1 download on the day of release.