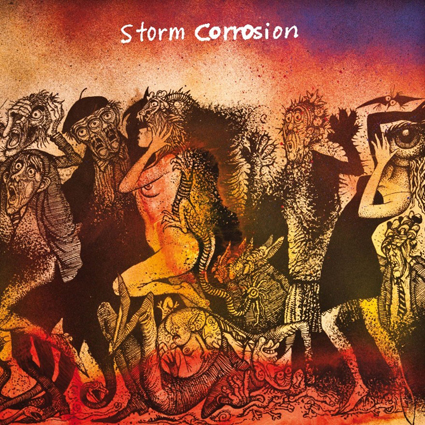 When the friendship between Steven Wilson and (Porcupine Tree) and Mikael Akerfeldt (Opeth) extended into a musical collaboration, fans became very excited to hear their first release titled Storm Corrosion. While getting blotto on red wine, Akerfeldt created the first riff for Drag Rope, which opens the album. Echoing the vocal harmonies of Gentle Giant, the remainder of the songs are distinctly Wilson and Akerfeldt. From the heavy to dream state, this primarily relaxing release takes the listener on a journey as the story unfolds.

Listeners familiar with the various works Wilson lays his hands on know that the sound quality is typically exceptional, and this holds true here. A very wide mix provides for an open space where synths, guitars, vocals, and the like fall around the listener. The title track calmly begins with flute and acoustic guitar that blend in cavernous surroundings. Dynamics are pleasantly deep, as the song evolves the listener travels further into the depth of the music. Soon sound emanates from all directions, as the world rumbles placing fear and anxiety into the mix. Suddenly the noise flashes away, only to flicker in and out before returning to the warm blend of guitar and vocals.

Unlike some other surround mixes, instrumentation is comfortably placed throughout all channels without sounding as if it was just placed there to call it surround. The deliberate use of all five channels involves the listener in the musical story. The intensity of Hag evokes the heavy sound of King Crimson while mixing in the eeriness of the Gothic genre.  Considered  a progressive-rock album, listeners will find that Storm Corrosion is far from traditional Prog, and stretches the artistic boundary nearly creating its own genre.

I picked up the limited special edition digipack version which includes 5.1 mixes of the entire album on Bluray, plus 7 bonus tracks (instrumentals & demos) and a photo gallery.  Fans will find the bonus material of interest for gaining insight into the process of mixing and writing this material.  The Special Edition is limited to 5,000 in the USA.