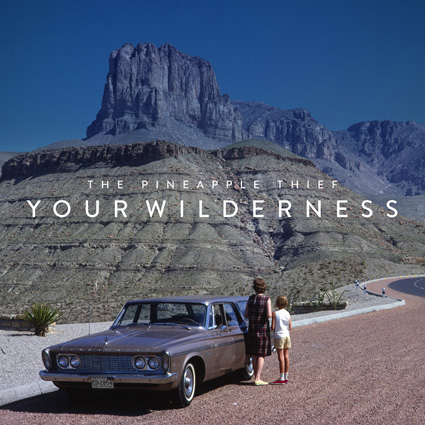 Your Wilderness by The Pineapple Thief is the band's 11th studio album, and takes a new direction that includes a dream team of contributors which perform without any inhibitions. Drawing inspiration from progressive roots, Bruce Soord has provided a creative fountain for the ongoing growth of The Pineapple Thief. Although lacking on the DVD, as a bonus this multi-disc set includes a single 40 minute Progressive/Ambient piece on the second CD,

Special guest performers include Gavin Harrison who has added brilliant drum parts, along with a four-piece choir, plus Geoffrey Richardson from Caravan, who has arranged and recorded string sections. Also Darran Charles of Godsticks fame contributed additional electric guitar work, plus Supertramp's John Helliwell performs some beautiful clarinet parts that bring this release to a poignant close. Your Wilderness follows the journey of a parent and child and chronicles love, fear, estrangement and, ultimately, reconciliation as their lives unfold.

Pineapple Thief recorded, mixed and engineered Your Wilderness at Soord Studios in Somerset along with Gavin Harrison who produced & engineered the various drum parts. The 2 CD, 1 DVD-A contains 24bit / 96kHz MLP Lossless 5.1 surround and 2.0 stereo mixes, along with 24/96 PCM stereo and Dolby Digital 5.1 surround codecs on a separate DVD-V layer. Bruce Soord took the helm for these fabulous 5.1 surround sound mixes, continuing to show off his mixing chops, which can also be heard on previous releases from Katatonia, Opeth, Tesserac, and his own solo release.

One of my favorite songs for 2016 is the opening track "In Exile" which starts with Harrison crisply ticking out the rhythm before Soord's rich vocals cut through. I was immediately engaged with the direct impactful sound of the drums which are spread widely across the front with delayed echoes percolating from the back channels. As the synth fills the rears, an incredibly solid bass roots up front in the center, while soft guitar sway across the entire soundstage. There is a super cool percussive shimmer that crisscrosses between the back channels and a reverse wash that moves forward in the mix, both creating amazing candy for the ear. This sentimental, yet energetic tune builds adding layers and slowing pushing the dynamics in a very clear enveloping discreet mix. In order to gain the full impact of the top notch sound quality of this mix, listeners must play the Advanced Resolution Surround layer with a DVD-A player, and skip the Dolby Digital codec. I can’t stress this enough for fans who haven’t yet upgraded their equipment, there is a night and day difference which is heard as immediacy and absolutely no squashing of the dynamic range. Additionally deep lows along with transparency and sound field are lost when listening to the Dolby Digital version, so don’t bother, now I will get back to commenting on the lossless codec.

Perhaps the heaviest song on this album is "Tear You Up" which explodes with a cranging riff that borderlines metal emanating across the sound stage, just as quickly reverting to clean pulsating guitars and piano parts that fill the room. Soord’s vocals are placed in the front center channel and have been recorded with such distinct clarity that I feel he is right in front of me.

Your Wilderness continues the musical story using subtle orchestration and electronics, along with an enigmatic clarinet, all added into various parts across the eight impactful songs. Utilizing their signature lush instrumentation, this release works extremely well as a multi-channel mix with plenty of layers to fully surround the listener. Several songs build into a reflective atmosphere that end at a climax.

Be aware that the 5.1 version is currently only sold as a deluxe 3 disc hardback book edition which is verging on the size of a standard LP vinyl record, but much thicker. Maybe that is what they specifically wanted as this album is short by todays’ standards, just clocking in at over 40 minutes, yet its brevity creates a very focused effort. I feel they have written great memorable melodies that are haunting while being uplifting at the same time, making not only the music but the mix one of my top picks for 2016.

Your Wilderness is a relaxing yet engaging listen that certainly encompasses the listener with a rich and clear room full of music. It is absolutely a must have for Pineapple Thief fans, neo-prog enthusiasts, and collectors of top notch surround sound mixes. There is a new guru in the 5.1 audio mixing world, and his name is Bruce Soord, I strongly suggest following the various surround mixes he has done, as they all have been excellent.

Out of Print, other editions available here: