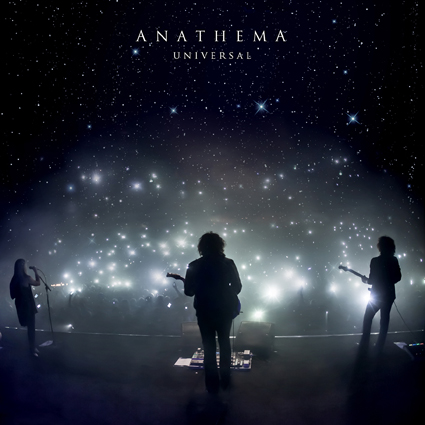 Anathema has released their HD concert film titled "Universal" by Lasse Hoile which documents Anathema's one-off performance at the Ancient Roman Theatre of Phillippoplis with the Plovdiv Philharmonic Orchestra. The Bluray version features bonus audio content and footage of the band recorded at the Union Chapel in London.

The fourth concert film by Anathema technically is an excellent Bluray, however they are not offering fans much uncharted territory on this concert footage. There are striking resemblances to the set lists from their first three DVDs, yet this concert film is by no means bad, rather it is special by virtue of the inclusion of the orchestra.

Their performances are really fantastic, exploding on the energetic sections of songs, while becoming captivatingly gentle during the quiet sections. With the remarkable vocal trio which features Vincent Cavanagh, Daniel Cavanagh and Lee Douglas, they blend and then contrast their vocal styles to great effect. The remaining musicians perform everything with precision and intense passion, with the orchestra adding color and texture.

Surround sound fans will surely be disappointed with the lack of any 5.1 mix.  However, the LPCM high resolution stereo mix is astonishingly clean with instruments extremely well balanced and literally sounding as good as their studio albums.

With lots of blue hues, the smoke injected stage is penetrated with lights which accentuate the members of the band.  The HD film generally is spectacular, with moments where reds appear saturated and distinctly glow.  There is a green flame emanating on 'A Simple Mistake' which lulls the audience into the song. It breaks down highlighting where the piece becomes heavy, while the camera cuts to the shot of the audience collectively bopping their heads.  The well Cora graphed stage show in the lovely Ancient Theater, with a subtle light show, cameras and editing are slow and musician friendly, letting fans get a good look at what the members of the band are playing. This is a delightful return from the frenetic zooming and cutting between one shot to another every second that has become more common place in music videos over the past decade.

If you don't own a Bluray yet, ask yourself, why not?   Many music releases have been including extras which are only available on the Bluray versions.  Yes, Bluray is by far a much better picture, although in most cases doesn't yet deliver higher quality audio over a DVD.  However, it is technically possible to have higher quality audio, and I believe we will see future releases utilizing the 192kHz sampling rate.    Consumers may wonder why the extras aren't included on the DVD version, it is simply an issue of storage space on the medium.  Thus, with a two hour concert, the DVD likely couldn't include the additional 30 minute concert at the Union Chapel in London.  Thus fans will want to grab the Bluray edition to enjoy this acoustic show.  Although the camera work is mediocre, the picture quality and lighting are very good, and the sound quality is great.  The editing between songs is rough, but the content is one of the best bonus materials I have seen to date.

With some reservation, Universal is recommended for fans of Anathema and musicians who seek concert footage that focuses on the band.   It is a worthy addition to the Anathema discography, and for fans who have none of their previous concert DVDs, this is a perfect one to add to their collection.