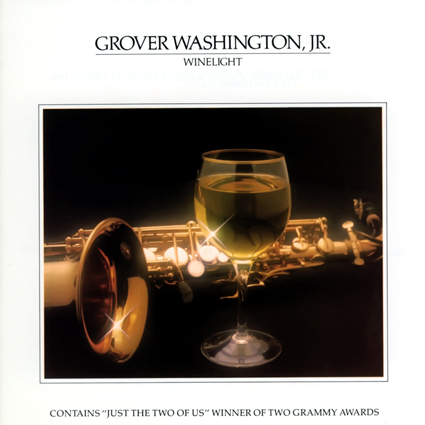 Known for setting the standard for the smooth jazz genre, Grover Washington Jr. produced a magical collection of soulful jazz on his album Winelight. He and his band are tight, with tasteful solos and terrific arrangements. This double Grammy award-winning album from 1980 is clearly Washington's most successful release.

Perhaps best-known for the hit "Just the Two of Us" sung by Bill Withers, start to finish Winelight is superb and masterfully recorded. Grover Washington Jr. stretches out on soprano, alto, and tenor sax on the remaining five instrumental tracks. Joined by percussionist and producer, Ralph MacDonald, the incomparable Steve Gadd on drums, and Eric Gale playing guitar. Winelight is one of those time-honored works that must be included in any worthy music collection, especially as a copy of this limited multi-channel quad Hybrid SACD from Audio Fidelity.

But, do not pick up this SACD for the stereo DSD layer. It pales in comparison to the reference quality discrete 5.1 surround mix Elliot Scheiner created several years back and originally released on DVD. There are vast differences in sonic quality, with the stereo DSD layer lacking rich lows, along with overly bright highs that remind me of the very first CD’s I purchased back in 1984. While the stereo DSD layer doesn’t suffer from the brittle harshness common to the earliest CD’s, the 5.1 mix brings this album to an entirely new level.

This incredible sounding multi-channel mix transforms Steve Gadd’s kick drum to a round thump that still incorporates the punch common to modern smooth jazz releases. The remainder of his kit snaps, sparkles and shimmers, all in what sounds like very close micing. Marcus Miller's bass becomes resonant, completely filling the low end while still leaving plenty of room for the remaining instruments. A very wide sound stage is used, placing guitars, keyboards, and percussion in the rear, while grounding the front channels with bass, drums, sax, and the remaining primary instrumentation.

The ecstasy begins on the first note Miller plays. It is so easy to hear the keyboards and Eric Gale's guitar clearly punches through, often from the right rear. Grover Washington Jr’s. sax naturally takes the center speaker, while none of the remaining instruments were mixed to the point of staying in one channel from track to track.

Rest assured, when you invite over your friends for a listen, you’ll have an exemplary surround mix to play for them. It ranks up there as one of the best sounding 5.1 mixes I have heard to date, it is totally immersive, enveloping with smooth transitions around the entire soundstage with crystal clear clarity of every part. A perfect demonstration disc that combines acoustic and electric instruments without any distortion what so ever.

This is a must have for surround sound fans. I am certain you’ll rank it as one of your favorite 5.1 mixes for sound quality and awesome use of all channels. Don’t be the person paying top dollar when it goes out of print, get your copy today!