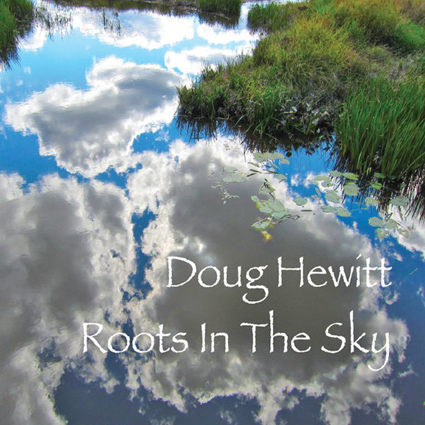 Eight years in the making, Doug Hewitt has surfaced with his latest release “Roots in the Sky.” Melding jazz and rock, with a clear jazz leaning (no this is not fusion), Hewitt has assembled a vast amount of talent to support this well-orchestrated album. The overall feeling is extremely live placing the listener in front of a stage at an open air music festival.

The opening track may throw some listeners back to early Chicago tunes, with horns blaring, hard hitting drums, and heavy rhythm guitars, yet “Starshine” is uniquely the new Hewitt sound. For those who have followed his musical career that spans 3 decades will immediately know he is a long way from the sound of his long out of print early releases that were primarily folk, albeit leaning towards jazz. Roots in the Sky builds on his previous album “Picasso Tomato,” by adding powerful arrangements which feature horns and solos from literally all of the members in the band. The mix is full and spread wide across the soundstage, consistently giving the listener a wealth of nuances to embrace.

Hewitt invokes a bit of Beatles on the second track “OK to Be Human,” with a strong jazz twist that joyously conveys the songs title. I noticed how natural the drums sound, which Hewitt maintains throughout the recording. The snare is light and cymbals are clear without any edginess. There is a gentle roundness to the bass and the tops lack harshness even for a compact disc derived from a 24bit / 48kHz stereo master, yielding an analog essence expected by vinyl lovers.

As the album progresses listeners will find many well-crafted solos embedded within the lushly arranged pieces. I especially like “Another Long Wave Goodbye,” where Hewitt pulls out his acoustic guitar and adds lovely string accompaniments. He incorporates a subtle reverb that creates a warm deep space from which the music freely flows around you. His voice affectionately calls across the room with over-dubbed backing vocals providing another layer of elegance to this piece.

Later in the album on the seventh track titled “Nothing,” Hewitt pushes the bounds with a really striking rhythm. By this point it is very evident that Roots in the Sky is by far his best and most accomplished work to date. In fact, it took many years to write, during which he painstakingly notated all the bass, drums, and piano, strings and other parts using Finale, a midi based software notation tool. He subsequently re-recorded all of these parts with a vast number of local musicians starting in June 2013.

The following magnificent instrumental “Winter’s Bounty” is another fine example of the remarkable detail that has been paid to create this release. With a Latin feel, the guitar solo harkens back to early Metheny with a tinge of distortion that reminds you that a rock sensibility still exists within these tunes.

But, if you were not sure if there is a rocker inside, “Congratulations” will make it evident that there truly is. Two guitars arpeggiate the chords with drums and bass kicking in, with Hewitt’s vocals covering the melody. The dynamics and variety of the album makes for a wonderful listen.

Capping off the album is the classic jazz tune “I’ll Remember April,” which has been covered numerous times over the years originally finding its popularity in Abbott and Costello’s 1942 comedy Ride 'em Cowboy. A fitting close to an album that has the makings of “must have” written all over it.

Strongly recommended for fans of jazz, followers of Doug Hewitt and any listeners seeking a joyous album that evokes the feeling of spending a Sunday at the park.