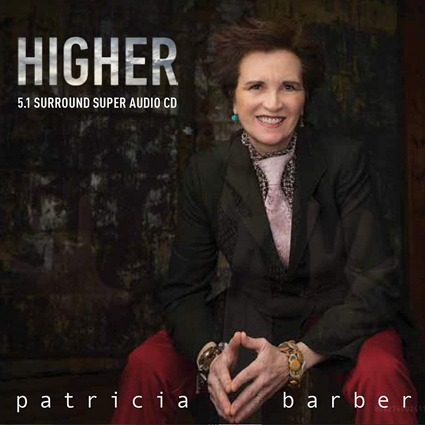 For over 30 years, songwriter, pianist, and singer Patricia Barber has graced American jazz with her unique style by overlapping contemporary instrumental jazz with popular vocal standards. Starting with her Premonition Records release “Café Blue” onward to her most well-known release “Modern Cool” featuring her sultry laced voice, she has radically reinterpreted songs that stretch beyond the boundaries of jazz. Additionally, these are the kind of albums that audiophiles often pull off the shelf to demonstrate to friends. Her 2021 release, “Higher,” stays the course and she once again collaborates with engineer Jim Anderson to bring an incredible audio quality right into ones listening room.

Higher was recorded in 2019 utilizing DXD 352.8kHz, but ArtistShare originally released the album only on CD and as a 44.1kHz / 16-bit lossless download. Now, for the first time, the album is available in DXD and multiple DSD resolutions, in both stereo and as an all-new multi-channel 5.1 mix. An SACD edition contains both the stereo and surround mixes, but purists will want to consider the DXD or DSD downloads which yield improved sampling rates. To clarify, DXD is not DSD (direct stream digital, one bit recording). Rather DXD is a PCM format that uses an extremely high sampling rate of 352.8kHz / 24bit and is approximately 4x the size of a DSD2.8 file (which is mathematically equivalent to 96kHz / 24-bit PCM). DXD is favored by some audio engineers since the Sonoma system for recording to DSD has limited editing capabilities. Overtime, the editing capabilities in the pure DSD realm will likely improve as the efficiency for delivering DSD files is about 25% less than PCM files. As broadband gets faster, some speculate that DSD could easily become the optimum choice for streaming and downloading music in the future.

After withdrawing from record label contracts, Barber released a series of live performances in download-only format. To record the songs on Higher, she obtained funding through the nonprofit organization ArtistShare. Certainly, a risky career move during a time when streaming services and high-budget YouTube videos dominate the market. “Angels, Birds and I…” is an eight-song cycle that is the centerpiece of the album and explores her poetic side. Guitarist Neal Alger returns as a guest playing a sensitive and plaintive solo on “Surrender,” and is the sole accompanying player on “High Summer Season.” Saxophonist Jim Gailloreto, a Chicago jazz performer and educator is the featured soloist on “Pallid Angel”. An ode to the unobtainable object of love. The concluding and title track of the song cycle “Higher” weaves together the images of angels, birds, and the songwriter’s creative “I”, in an intimate duo of voice and piano. A mini set of jazz standards that concludes the album has been drawn from Barber’s live repertoire.