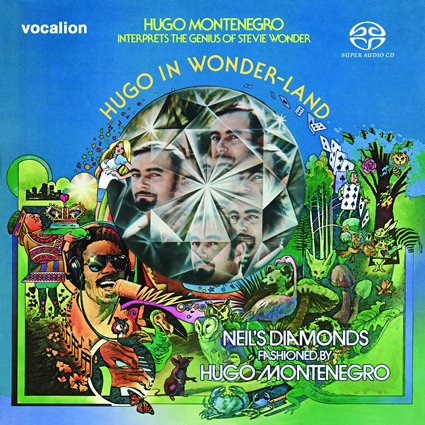 There is absolutely no way I would have been caught dead listening to Hugo Montenengro in the year it was released. Quad or no quad, these particular renditions of Stevie Wonder’s most respected works were clearly made for Poindexter and his crowd of balding fellowmen back in 1974. Decades later, I have thrown in the towel, maybe I just needed to loose some hair to fully hear the mastery of these instrumental versions. Now you can too, since they are available for the first time on quad SACD. No need to find a quad turntable, just hang in the world of 1-bit purity.

These discrete 4 channel hold true to their vinyl brethren, although your SACD player will probably try to trick you into believing the disc is 5.1. No, no, no, there is no sub or center, but man those four channels fire up a rich mix of funk a la easy listening instrumentation. Yet, Hugo In Wonder Land does kick, with rockish drums up front in the center, and Larry Carlton’s wah wah guitar funking out from the rear right channel on the opening track “Living for the City.” For fans of movement within the mix, there is a super cool percussive element crossing between the left and right channels while the band shakes Poindexter’s listening room.

Dynamically these recordings are not Too High, and lack the transparency often heard on most later day releases, along with some masterful classic rock remixes. There is a distinct difference between the quad and stereo DSD layers, primarily evident in a fuller sounding low end on the quad layer. While these may not be an audiophile dream come true, they are excellent in their own right.

With multiple layers of instrumentation, the quad mix is absolutely rich and some more fun studio wizardry has been cast on these mixes. While guitar hits slap across the front channels on Superstition, check out that synth part that flies around the room spreading its magic across all four channels. Horn riffs punch in across the back channels, and additional swells move across the soundstage. Without automation, I can only imagine how many hands were on deck to create this mix!

Sure, some of those keyboard sounds are dated, but these rockish orchestral arrangements were likely forward for there time. I am not sure one would have heard these in a mall, but no respecting audiophile would pay any attention to the sound coming out of those crappy ceiling speakers back then. Instead they would race home to the comfort of their den with some form of spirits while kicking back to some incredible Hugo Montenegro in Quadrophonic.

Dutton Vocalion has released nearly two dozen quad SACD’s, each at very reasonable prices. They often include transfers of two albums which were originally released on vinyl, and specifically in these cases quadrophonic vinyl. Although the sources of the transfer are not noted, this Hybrid SACD also contains Montenegro’s 1973 release “Neil's Diamonds Fashioned” which includes another 10 songs all by Neil Diamond. Naturally these tunes are a bit more schmaltzy, but upon reading the liner notes I am told these are the way I always wanted to hear these songs, so I’ll keep listening!

No kidding, “Cracklin' Rosie” is another pretty happening quad mix with the bass part weighted heavily toward the back channels and the cymbal part whipping around all four channels. With drums up front, horns punch in from the back left and respond in the front right.

Pop fans should find the rendition of “Sweet Caroline” to be very zesty, with horns starting in the back left, followed by a response in the back right and completing the musical thought up front in the center channel. A nice deep tom hit emphasis the musical phrase and the keyboard melody is slung across the soundstage falling into a web chamber.

Even with its audiophile imperfections, this quad SACD is well worth adding to your collection, especially for surround enthusiasts and cats seeking to chill out to, dare I say, modern classics. The arrangements alone are intriguing for musicians, and the enveloping quad fsmix is candy to the ear. I just hope you don’t lose your hair after some easy listening.