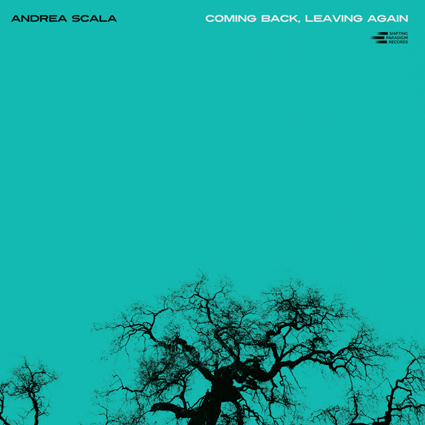 For me there is a diverse dimensional aspect to music written by drummers, and the 2020 release “Coming Back, Leaving Again” by Andrea Scala absolutely takes listeners there. The Italian born musician has worked with many artists over the past two decades and now has released his first solo album on Shifting Paradigm Records. His natural inclination towards percussive instruments finds advance time signatures blended across tracks that range beyond the bounds of fusion jazz crossing into electronic, modern, avant garde, deep nu, standard and some swinging jazz.

It was during Scala’s 2017 trip to North America where he observed the cultures, places, art and music in great detail that inspired him to start working on his compositions for Coming Back, Leaving Again. The nine tracks found on this album were subsequently recorded in December 2018 and January 2019 at Andrea Scala’s home studio and Movin’ Too Fast Studio with engineering by Fabio Raponi, with additional recordings at Groove Farm by Davide Abbruzzese in Roma, Italy. The 24-bit high resolution recordings were mixed and mastered by Alessandro Assante at Blab-Lab.

This review became a perfect test project as I was originally provided CD quality 44.1k Hz / 16-bit FLAC files, which were subsequently replaced with 44.1kHz / 24-bit FLAC (and WAVE) files that are now available from the labels BandCamp page. Working backwards just a bit, I did compare both the 24-bit files, and as I suspected, I couldn’t notice any difference between the Wave and the FLAC versions. However, I absolutely heard a difference between the 16-bit and 24-bit FLAC files, which I will discuss in more detail below. As many high resolution fans are aware, from a technical perspective, these particular 44.1/24 files are quasi hi-res. From a purist perspective codecs containing streams with at least 96kHz / 24-bit or better sampling rate and bit depth are considered hi-res. All too often, and even accepted here on Hi-Res Edition, 48kHz / 24-bit or better is considered hi-res audio. However, it can easily be argued that the key component is the bit depth, which defines the dynamic range, while the sampling rate which defines the frequency range bears much less significance.

That’s it for the technical comments, it really comes down to your ears, and now it is time to delve into this stereo release.

The opening track “Synthesis” switches between a super cool 11/16 rhythmic beat and standard 4/4 that synchronizes the base and kick drum on this modern jazz piece. The near field microphone placement around the kit defines a small surrounding room which aids in a high level of detail of Scala’s drums. The base is extremely solid and extends deeply with a thrusting bottom. Stereo imaging excels nicely demonstrating a wonderful separation as the keyboards as they delay across from the left to the right channel. Much of the higher definition of the 24-bit 44.1 kHz version extends the clarity of the snappy and full snare drum, along with a very concentrated kick and sparkling high-hat and cymbals. These hi-res lossless files bring out the tapping of the sticks and timbre created by the overtones. I specifically noted a difference between the 16-bit and the 24-bit version when it came to the openness surrounding the drum kit, which allowed for greater presence on the 24-bit version. Yet, in general these differences are subtle, and many listeners may not even notice the improvement, depending on their equipment and how their ears have been trained. 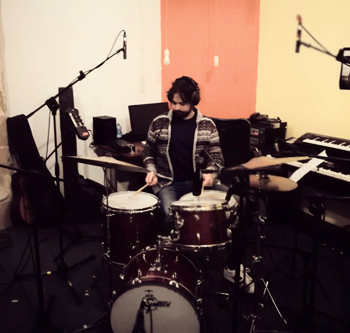 Scala describes the recording environment for many of the drum parts which were done in his studio. The simple room, which he considers a laboratory, was built over time with help from his father along with his friend, musician, audio engineer and producer Fabio Raponi. They installed sound absorbing panels eliminating reflections tweaking things slightly to enhance the natural sound of the drums.

Audio engineer and producer Raponi goes on to describe some of the microphones used on the drums. These varied from track to track, using whatever sounded the best. Often times the Shure SM57 was used on the snare, or the Sennheiser MD421 or even an Apex condenser microphone. For overheads, AKG C1000Ss were placed toward the left and right side of the kit. To capture the tom and floor tom the Sennheiser E604 was tucked into placed. Two microphones were utilized to capture the full sound of the kick drum, both an AKG D112 and a Studio Projects TB1 microphone was added to fill out the lowest frequencies. Some other favorites include the AKG 414 and Neumann U87 microphones.

Continuing the comparison, I noticed a tendency for the 24-bit version to push more air giving me a stronger physical connection to the bass. The next tune “Trees” reminds me of the music by Lyle Mays, yielding a softer modern jazz sound. The mix stretches across a wide stereo field with some wonderful dynamic nuances to this laid-back piece that are absolutely elevated on the hi-res version compared to the 16-bit edition. One nice thing, fans can buy a copy of the CD, and still receive the hi-res version, giving them the option to have the CD while on the go and as part of their physical collection while also enjoying the higher quality audio files for their deep listening pleasure at home.

By the third track you may have thought that you knew the sound of Andrea Scala, but that is far from the truth. “Out Here” takes a wild turn into the electronica realm that goes far beyond the world of fusion and jazz. Yet, this is not dance party electronica with its 15/8 time signature, it hints at the heaviness of King Crimson, bundling up elements of these and other genres into one. Giuseppe Romagnoli’s double bass carries a heaviness that strongly plunges into the lowest regions, and the razor buzzing synthesizer parts swell and fade as the peace draws you in. It sets a tense mood as the music revolves around a theme, with loose groove and pattern based melodies that are mesmerizing.

As has become common in our connected world, parts of the project were completed in multiple studios at different times. Pre-production work lead to recording drum parts at Scala’s studio lab, and subsequently adding parts in a studio in Rome to take advantage of the larger space, with guitars and synthesizer parts completed remotely at Raponi’s studio. Mixing engineer Alessandro Assante briefly notes he worked with two different audio exit Busses that flowed into the Stereo out. The first was for the kick and bass, the second comprised of all the remaining instruments. Cubase software was used for mixing, and he typically integrates Steinberg audio dynamic compressors. When Assante needs to color the sound, his favorites include Waves Veq 3, Tony Maserati B72, Api 2500, and Nls Channel. He comments that for added ambience some drum tracks incorporate the Oxford Reverb Native, and for other instruments the Steinberg REVerence or Waves M Reverb were utilized. Audiophiles seeking to mimic a studio listening environment can check out JBL, Tannoy, or Yamaha monitors, all which are resident speakers at Assante Blab-lab studio.

Again the 24-bit version excels in providing a greater level of detail and accentuating both the ambience and dynamics, which is precisely what listeners should expect from a higher bit depth codec. As the track Out Here enters into the piano solo, it returns to a much more standard jazz feel with the influence of a light ambient delay behind the piano, which is slightly diminished on the 16-bit version, yet becoming so natural and pleasantly heard on the 24-bit version. This comparison is revealing to me as it is a true reminder of why I emphatically enjoy high resolution audio. I’m sure most of my readers here would agree, this is why we want all of our music to be available in hi-res versions. I absolutely feel that I am actually hearing what was assembled and mixed in the studio versus having a squashed and foggy standard resolution version that masks these details and dynamics.

One of my favorite songs on the album is “Young Sunrise,” which features a lovely melody overtop a bass, drums and piano trio setting. The richness of the double bass fills the room with the plucked strings and its vibration. The acoustic piano feels very present, capturing the breadth of the dynamics from the lows to the highs, emitting a glistening brightness in the upper end, a wonderful tenderness in the middle range, and the fullness of the lows.

The seven track is captivating four movie fans, especially for the scary elements that step forward and fall back in the soundstage as they spread widely across the entire stereoscape. I absolutely am enthralled by the clanging bells that appear in both the left and right channels and find the synthesize sound effects to really set the feel for this piece. Throughout the recording the excellent transparency has been very evident, and one can even notice it more here as the momentary gaps between rhythmic phrases allow for some open space.

“Cracked” is another track that jumps out for me, featuring Manlio Maresca on electric guitar playing the fusion styled melody. I could easily imagine this track as part of the catalog for John Scofield, yet this piece exists here among all of the other diverse pieces on Scala’s debut album, continuing to show off his wide range of writing styles. The electrified sound has a bit of a club like feel stretching into wild rhythmic time signatures. None of the parts fight with each other and they remain very clear throughout the overall recording. I like the closeness of each of the parts which allows my ear to be very present to their dynamics and details of the musical execution