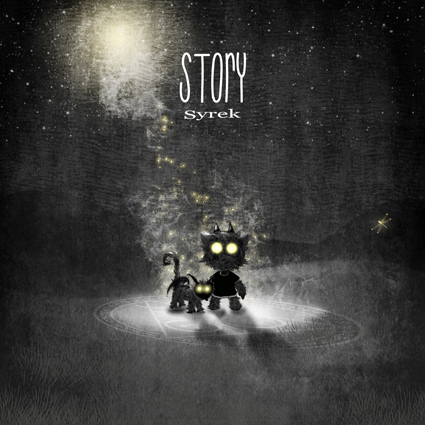 Syrek is the project of guitarist/composer Terry Syrek, who has worked with an impressive list of renowned artists including Trans-Siberian Orchestra, Paul Gilbert, John Petrucci among others. Story is set to an instrumental progressive metal soundtrack that easily will be favored by fans of Liquid Tension Experiment, Joe Satrani, and Dream Theater.

Syrek has assembled an impressive international lineup of musicians including: German drummer Marco Minnemann (Steven Wilson, Dewa Budjana). Bass guitar duties are covered by Bryan Beller from America (The Aristocrats, Steve Vai, Joe Satriani) and Indian bassist Mohini Dey (Steve Vai, Tony McAlpine). Keyboards are handled by Lalle Larsson (Karmakanic, Electrocution 250, Agents of Mercy) from Sweden and completing the band are Romanian violinist Florian Cristea and narrator Keith Szarabajka (The X-Files, Dark Knight, The Equalizer).
Mix and mastering engineer Rich Mouser (Dream Theater, Flying Colors, Liquid Tension Experiment, Spock's Beard) has made great use of the stereo imaging with sound effects and narration spread across the soundstage. The concept album “Story” recounts a tale of two little creatures who go on a grand adventure, with narration between the fully instrumental tracks. The music immediately bursts into a vigorous riff that reminds me of the three projects by Liquid Tension Experiment. This piece aptly named “I Think it’s a Monster” boasts sizzling guitars, driving bass parts and hard-hitting drums work, all that could easily rattle one’s walls and windows. Right from the start the virtuosity of these musicians is on constant display.

The next piece, “Balloon Ride Over a Jigsaw Map” continues the massive shredding with a melodic journey with riffs that stretch over a couple of octaves and solos that soar into the stratosphere. From arpeggiated patterns that collide with rapid fire playing, Syrek takes on this story without incorporating lyrics, instead describing each scene through the music and the tonal quality of their instruments. The detail of timbre and tone is well defined, and the parts fit well together.

Generally, guitars and synthesizers have been poured into an ambient space, scattering across the two channels, while the drums alternatively are very direct, distinctly hitting from the center and spreading out to the left and right speakers. Over the past couple of decades, it has become commonplace in modern mixes to pump up the kick drum, which Minnemann plays at rapid fire speeds. Certainly, this must be a serious workout, along with keeping track of the odd time signatures that must be a great test for anyone’s math skills. The fourth track “I Got a Lightning Bug” demonstrates all of this and offers good dynamics with a real sense of space along with featuring some blazing guitar solos that easily remind me of guitarist Joe Satriani.

OK, the album is not entirely hard-hitting, as the chaps cross through the middle of their journey on the ninth track “Dandelion Sword” the band simmers down into a melodic ballad style piece. With glistening guitars that sparkle across the sound field and the elongated melodic notes gliding into one another, the emotion of the music nicely describes the story. All of this just adds to my full appreciation for these well written songs.

After braving battles and fires, among other obstacles, the two heroes are arriving at their destination. As we head into the 11th track, “Promenade Into The End,” the narrator bridges the listener into the closing musical piece. This is a waltz style ballad titled “The End” written in three quarter time starting with solo piano. Its peaceful sound brings this absolutely vigorous album to a perfect close. The balance has been very good throughout and the musicianship is entirely top notch.

I can say it is rare to find an album of such high quality, and some enthusiasts have waited a long time for an album of this caliber. Terry Syrek is clearly a monster player and has surrounded himself with a venerable group of musicians. Progressive Rock and Metal Meister’s will certainly want to get this artist released album, it is ablaze!

CD and WAVE/FLAC 2.0 44.1kHz / 16-bit Download versions, preview it on streaming services too.