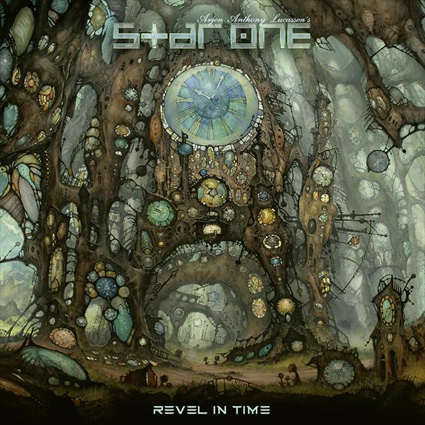 Arjen Anthony Lucassen of the band Ayreon has released “Revel in Time”, the third album from his alternate project Star One. The album contrasts his most recent release “Transitus” from Ayreon with its cinematic experience, instead diving into heavy metal riffs and powerful chord structures.

Revel in Time is effectively a concept album inspired by different movies that explore the manipulation of time. The album also sets itself apart from the two preceding albums from the Star One project, each which featured the same cast of four singers: Floor Jansen, Russell Allen, Damian Wilson, and Dan Swano. Instead, on this latest release Lucassen decided to mainly have unique singers for each of the songs, plus the fantastic guide tracks that were initially recorded have in turn ended up as alternate versions on the second CD, affectionally known as the “Same Song, Different Singer” disc. Ultimately across both CD’s there are about 30 different musicians contributing to the new album, with many of these being lead singers, plus at the core of Star One is Ed Warby’s powerful drums carrying through as well as Lucassen’s guitar and bass work.

For hi-res and surround sound aficionados a limited artbook deluxe edition is available containing 3 CD’s and a Blu-ray. The Blu-ray disc contains a 5.1 surround mix of the album along with hi-res 24-bit stereo mixes of both the first and second CD, plus behind the scenes footage and video clips. The three CDs contain the same songs, with alternate singers on the second disc, and instrumental versions on the third disc. For analog vinyl collectors multiple editions are available in a variety of colors.

3 CD + 1.Blu-ray limited artbook edition with 5.1 surround and 2.0 hi-res stereo mixes.  Also available as a 2 CD set and on Vinyl