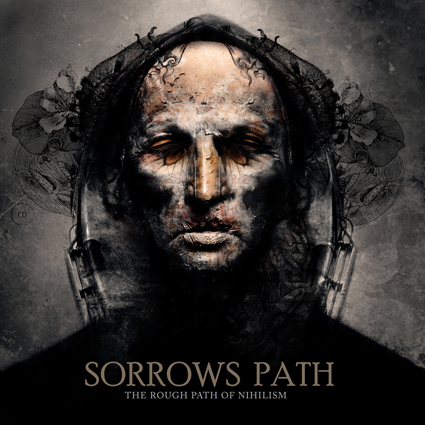 OriBased in Athens, Greece, Sorrows Path has been a long time in the making, and members have endured a tough road along the way.  Originally formed by Takis Drakopoulos (bass) and Kostas Salomidis (guitar) back in 1993,  playing gigs and releasing their first demo a few years later.  Tragically their original founding bassist died, and after being signed to a label and recording a release in 1998 that was subsequently shelved, they took a two year break due to the mandatory military service that the band members had to undergo.  However a few more years elapsed while co-founder, Kostas Salomidis recovered from a neck injury caused by a motorcycle accident that nearly left him paralyzed.
By the end of 2005 the band was back in action and re-released their mid 90's work under the title "Resurrection".  After spending a couple of years writing new material they headed back into the studio with new guitarist Giannis Tziligkakis (Ominous Sky - GR) in order to fulfil the band's vision for a solid and heavier sound that the new material   demanded, releasing "The Rough Path of Nihilism" near the end of 2010.

I heard about this band recently and wanted to check them out.  With a progressive rock leaning, this hard rock and edging on doom group has a full sound that will please any fan of heavy rock.  From blistering guitar solos, to monstrous bass, cranging rhythm guitars and walloping drums, Sorrows Path gives the listener a wall of sound literally throughout every note of the album.  Their pieces are crafty and don't easily follow the convention of verse and chorus.  Instead there are many parts that build each song weaving the stories throughout the album.  Stylistically these feel a bit jerky, however this is the heavy rock genre hard at work energizing the listener along the way.

While The Rough Path of Nihilism is strong in creativity, it lacks in depth and dynamics embraced by high-resolution music enthusiasts.  Each instrument overpowers the others and the crustal clear brilliance found on comparable releases doesn't exist.  Channel separation is nice with good usage for the drums and widely spread guitars.  Yet, there was no depth to the soundstage and everything feels squashed into a small range that hits the listener continuously.

For those seeking an onslaught of sound, Sorrows Path easily provides this listening experience.  For collectors of heavy rock this release surely will be a great addition to your collection.  As of this writing in January 2013, Sorrows Path is currently back in the studio recording their next release.