Xavi Reija - The Sound of the Earth - 2.0 Hi-Res download 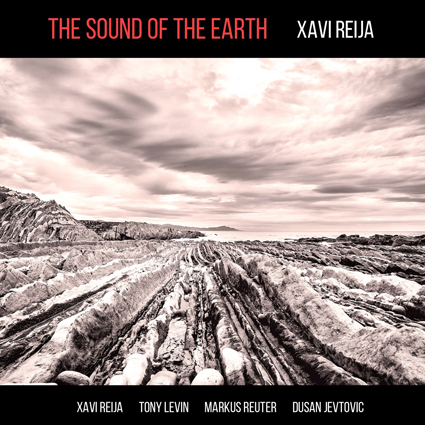 There is a haunting darkness which carries through Xavi Reija’s 2018 release, “The Sound of the Earth.” Echoing elements of free form electric jazz underpinned by fusion and post rock. The quartet of outstanding musicians stroll through multiple landscapes providing grooves and chaos along the way, led by the dynamic drum work of Reija.

Legendary bassist and stickman Tony Levin solidly fills the lows in perfect sync, while Markus Reuter adds his special blend on the touch guitar and Dusan Jevtovic pulls out all the stops on his guitar. Not only is the album filled with stellar musicians, the music truly sets a new standard for electrified journeys, and it has been recorded and released in high resolution stereo by MoonJune Records. Available as a download from Reija’s BandCamp page, along with a compact disc version for your music library.

Taking a trip back to the “Deep Ocean,” a song previously recorded by Reija and Jevtovic, cymbals crash across the stereo field emulating waves on a rocky shore, carried by Jevtovic’s grinding guitar and underpinned by the groove of Levin’s growling bass. It is immediately apparent that the main advantage of a high-resolution stereo 44.1k/24-bit lossless file is in extending the extreme lows exuded by the stick. Even the slap of the snare is rich and sets back into the mix as guitars echo across the channels.

Reuter’s touch guitar takes center stage on the first part of the title track “The Sound of the Earth I,” an ambient instrumental that extends the range of works previously done by Robert Fripp and Terje Rypdal. However, while his touch guitar may be the central force, it spreads widely beyond the stereo field, allowing for bass, drums and guitars to directly fall into the center. My appreciation for hi-res once again is wonderfully evident with slowly evolving dynamics that touch on the lightest of cymbal hits to the power of the bass.

Dynamics elevate as we step out “From Darkness” finding Levin’s minimalistic bass work syncing with the 5/8 drumming which lay the path for Jevtovic and Reuter’s riffing. Other than the purposefully distorted frantic guitars, the album emanates pure clear audio which was recorded at Club House Studio, Rhineback, NY, USA by Paul Antonell. The extremely well balanced mix was subsequently created by engineer Jesus Rovira at La Casa Murada Studio, Banyeres del Penedés, Spain, who has also recorded several other albums for the MoonJune label.

The theme of the album title is stretched out over four parts throughout the release. The joyous brushwork and a throbbing bass groove distinctly become the canvas for the tattered guitar tones, running up and down canyons, exploding and slipping back down. The edge and smoothness are immediate, providing extreme detail to the aural palette.

The sonic character of the mix is brilliant and offers some extremely nice ear candy for fans who revel in a widely spread soundscape. The nearly 17 minutes long fourth incarnation titled, “The Sound of the Earth IV,” contains plenty of spirited interplay with no part becoming lost among the others.

An aspect that is lovely about this recording is you can truly hear the room and its physical space along with the emotional connection between these gifted musicians. Both add life to the album, and I absolutely feel that these are truly the Sounds of the Earth presented by an intuitive musical unit.

Although much of this music isn’t served up for easy consumption, the reward is the ensatiable desire to taste it again with another listen. I found myself nearly dancing across the floor, embarking on a trail of aural delight. Strongly recommended for fans of fusion jazz, free-form electric jazz, ambient, and post-rock elements. Likewise, this is a must have for collectors of any of these four fine musicians, and a very worthy listen for high resolution audio enthusiasts.