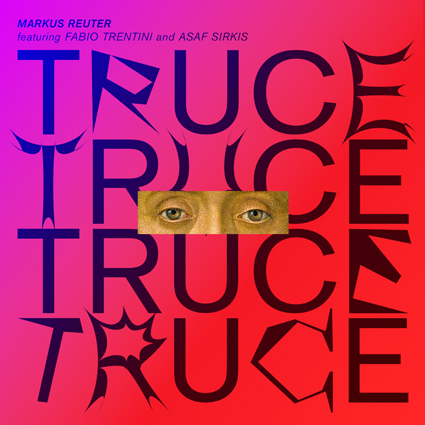 For fusion and progressive fans that have followed MoonJune Records over the past 19 years, and maybe even collected all of their releases, the latest album “Truce” from guitarist Markus Reuter marks the 100th release from this one man operation run by Leonardo Pavkovic. It is fitting that we get an expansive aural assault with ripping solos from guitar maestro Markus Reuter who follows in the steps of many power trio formatted albums on the label, Reuter sparks his magical music with spell binding textural wizardry taking fans into a new realm.

A few dimensions are also encountered here on Truce with both a quad and surround mix that are reviewed below alongside the hi-res stereo download. Choose the BandCamp MoonJune door for the 2.0 realm or the Surround Music One door for the 4.0 and 5.1 realms. In short, in either case listeners will enter a world of audio ecstasy.

I had first received and listened to this astonishing album in stereo, enthralled by the clarity, granular detail, and openness of the seven engaging tracks. I continue to be very impressed with the technical prowess of recording engineer Jesus Rovira who was at the helm for these live studio sessions at La Casa Murada, Banyeres del Penedes, Spain on May 16, 2019. The stereo version post-production and mix was completed by trio bassist Fabio Trentini. On the other hand, the two multi-channel versions were created by Jan Printz, and discussed below is the differences between all of them!

Still before we venture into these various realms, let me introduce you to the band, each who took part in writing these fine pieces on Truce. The power trio consists of Markus Reuter shaping the sonics on Touch Guitars® AU8 and Live Looping, Fabio Trentini on the Wal Fretless Bass and Bass Synthesizer, plus Asaf Sirkis keeping time on Acoustic Drums.

I have been flipping between preferring quad and 5.1 surround mixes for several months now. I asked surround mixing engineer Jan prints what the driving force was to offer both quad and 5.1 as part of both the Blu-ray disc and download flag files from surround one. He comments, “it’s important to me that an album is released in multiple formats so it can be received by most fans the way they prefer.”
upon my first immersive listen, I dug into the quad version to see how it filled my listening room and whether or not it would provide the engaging listen I was hoping for. Right from the start with the first track titled “The Truce” I was enveloped with co-producer and guitarist Reuter’s soundscapes swelling from the rear channels while Sirkis’s drums perched up towards the front with plenty of reflective energy placed in the back and tom-toms hitting around the sides. Working off of four stereo stems, Printz created a fulfilling mix that flows around the entire room with bass naturally throbbing between the front channels as Reuters guitars rifle from the front to the back.

Throughout the opening track listeners are awarded with an onslaught of high dynamics leading into spatial openness with tom-toms beating from left to right. Recording engineer Jesus Rivera expertly captures the nuanced sound of each musician at his studio adding to the perfection of this 100th release from MoonJune records. The quad mix expands the drum kit by rolling the tom-toms towards the back channels and shooting the guitar all the way back as it delays and trails off after each line.

Taking a careful listen to the 5.1 surround version yields a slightly more defined location for the guitar which has been placed between the two front channels with the additional use of the center speaker. Printz explains to me that the spatial depth extends to the center rather than fully to the rears on the 5.1 version, and I surmise this is leading my ears to hear the guitar as more centrally focus. I didn’t notice any significant extension into the low end where the sub-channel carries the deep tones of the bass and kick drum. I find I lean toward the quad mix merely for Its further extension to the back channels, but realistically this will all come down to personal preference and your playback equipment on hand.

As I listen throughout the album to the multi-channel mixes I totally dig the way Reuter’s live looping rises from the back channels while renowned bassist and co-producer Fabio Trentini’s bass grooves from the front pouring towards the rear. Reuter’s guitars slice through driven by crisps effects and distorted tone. His guitar style is diverse conveying some elements of Alan Holdsworth and Steve Vai. The heavy hitting drum work of Sirkis resiliently whacks out the time via a rich snare and powerful kick drum. Cymbals are zingy and filled with vibrant overtones while the openness to the surround mix is truly encompassing with excellent transparency and a broad soundstage reaching beyond the edges. Although the back channels prominently feature Reuter’s soundscapes, the depth of these multi-channel mixes are enhanced by the lighter touch of ambient space given to the guitar, bass, and drums into the rears. In fact, it is this depth that gives me something to lean back on instead of being placed in front of a wall of sound.

I must note this is not fusion from the 70’s, nor does it have the jazzy melodies associated with that era and preceding standard jazz errors. Instead Truce is a more rock influenced release that progresses into the world of jam bands, with free-form and improvisational grooves with heavy leanings on atmospheric music. It goes far beyond dreamy ambience and certainly will take you on an amazingly colorful trip. Just allow your mind to travel to places far beyond the bounds of your listening room and the magic of the music will do the rest.

Fans of bassist Percy Jones and Tony Levin will likely enjoy Truce, as will followers of drummers Bill Bruford and John Bonham. Although the sixth track “Let Me Touch Your Batman” is probably the furthest away from any of them with it’s in the moment meandering and playfulness. Throughout the album the general layout of the multi-channel mixes remain consistent, which coming from a power trio works very well. Thus, don’t expect wild movement around the space. Instead, listeners will hear the delays and reverberation that aid in opening up the soundstage.

I became curious about some of the tricks surround mixing engineer Printz utilized to build additional depth to his mixes from the four 88.2kHz / 24-bit stereo stems. These stereo stems include lead guitar, drums, bass parts, and soundscapes. Yet the tom-toms roll to the back channels, which Printz describes as a detailed process of identifying the particular beats within the track and moving them from the front to the back as the tom-toms are struck. As shown in the picture below, once identified, the modified section is automatically rendered by the software when creating the final multi-channel files. Having come from the analog and automation world myself, this advancement certainly provides for a very nice discrete placement of parts within the quad and surround spaces.

For further clarification, stems may or may not include bundled elements such as compression, equalization, reverb, delays and of course the recorded instrument. It is the combination of these various elements that actually paint the full picture of each part, allowing for the color and timber to be consistent across various mixes. On the other hand, the balance among these stems also are a creative aspect between the various mixes. To that end, Printz notes that the quad mix boosts the bass and lead guitar since the center and sub channel are not used.

Now, let’s get down to the stereo mix, which is also 88.2kHz / 24-bit Wave or FLAC and found on the Blu-ray too. Of course, it loses the dimensionality, but fully retains the high sound quality with a very cohesive interplay among the four parts. I am absolutely thrilled with the imaging and spread across the stereo field. The bass feels equally as deep, the drums are vivid and the guitars tuck into the mix extremely nicely. I sense some space falling further behind the speakers, but admittedly miss the depth produced by the multi-channel versions. For hi-res audiophiles utilizing a stereo setup, Truce should sound amazing on your system, as it does on mine. An aspect I appreciate about the stereo edition is how well the soundscapes blend with the guitar work along with the rhythm section. There is an amazing integration across the two front channels that fits so perfectly, giving listeners an expertly balanced mix.

We are off to a great start in 2020 with this 100th release from MoonJune. Both surround and hi-res stereo fans have an excellent album to add into their collection. Fusion and Jam Band enthusiasts are strongly recommended to pick this up, and of course for fans of Markus Reuter, Truce is a must have. Stereo and multi-channel lossless download editions are available separately or get them all on the Blu-ray edition. Below are all of the links for the various versions.