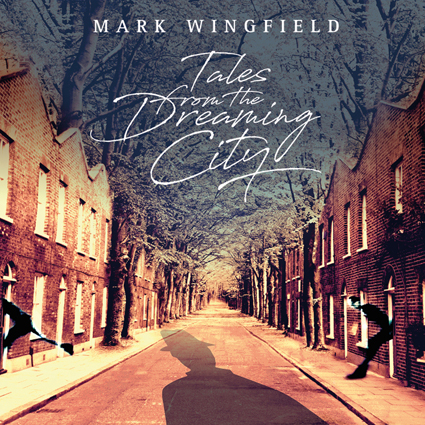 Each new album I hear from Mark Wingfield is more impressive, he keeps adding to the depth of his brilliant fusion all while forging his unique tonal quality on his guitars. For those requiring a branch from which Wingfield has grown, one can here elements of Jeff Beck and Alan Holdsworth with a touch of Pat Metheny blended into the core. Yet, his music takes on an entirely new soundscape as the trio held down by the remarkable fretless bassist Yaron Stavi, hard hitting drummer Asaf Sirkis, along with keyboardist Dominique Vantomme playing melodies and extra textures plus adding solos on a few tracks.

This 2018 release was recorded at La Casa Murada Studios, Banyeres del Penedés, Catalunya, Spain by Jesus Rovira, and subsequently Mixed and mastered by Mark Wingfield at Heron Island Studio, Cambridgeshire, England. The detail and clarity of the high-resolution mix of “Tales from the Dreaming City” which is available as an 88.2kHz / 24-bit download from the Moonjune Records BandCamp page is simply fantastic at all levels. From the ghostly echoes to the subtle soundscapes that lay under the rousing bass and drums, this nuanced album continues to show the strength of hi-res releases.

From the moment the opening track “The Fifth Window” kicks in there is a real sense of depth and striking dynamics. The snap of the snare verges on metallic without actually ringing, and instead thwacking in a small bright space, providing depth to a mix that expands across the stereoscape. Wingfield’s guitar stretches between the left and right channels with a brilliant sezt that clearly defines each nuanced note. Sustaining notes bend and fall off deep into the sound field adding dimensionality to the mix. Keyboards extend widely across the soundstage, layered underneath the heavy hitting drums and stratospheric guitar solos. Bass grinds into the bottom while the balance of the drum kit shimmer and punch beyond the center of the mix.

The remarkable range of the third track “The Way to Hemingford Grey” absolutely shows of the strength of high resolution formats. Stavi’s bass drills down deeply ripping away layers of soil and shattering rocks as he forges to the bottom. Take note to the tingle of the cymbals as Sirkis strikes them, along with the vibrant swashing of the crash cymbals that fall at the outer edges of the kit. The openness and striking transparency give a very life like presence to this recording that has a wonderful balance. After a remarkable fretless bass solo, Vantomme electrifies listeners with his synth driven solo which distinctly accentuates each passing timber, creating a fantastic aural palette to this track.

While I classify this music as fusion at the simplest terms, Executive Producer Leonardo Pavkovic is so very right in calling this release progressive. Wingfield’s writing steps far outside of fusion, telling a story and finding passages that journey beyond the core melody. These songs are magical, mysterious, and moving in an amazingly invigorating way. He has created an identifiably unique guitar sound that takes the instrument into a new space with a voice which is modern and filled with melody.

Wingfield says, “Tales from the Dreaming City is more a concept album, it is a set of pieces that have a common inspiration, an album of musical stories.” An irony for guitar fans may be that Wingfield has long ceased listening to music played by other guitarists, instead he is influenced by trumpet, oboe, and voice.

Yet, the most ambient piece “At a Small Hour of the Night” also evokes the vivid tapestries similarly weaved by many ECM artists. Footsteps wander from the center to the left and back to open a door into an aural ecstasy of wonder underpinned by improvisational intensity. With utter transparency and subtle dynamics which microscopically create the spatial characteristics, I found myself carried into the darkness and returned as the song ends with footsteps walking out after the eight minute experience.

Then, possibly the most progressive track immediately follows as the band drives hard into “A Wind Blows Down Turnpike Lane,” with elevated dynamics that may take off your roof. This comparatively short piece accentuates Wingfield’s soaring guitar work which squeals and rips over the heavy bass and hammering drums. While the overall mix leans to the bright side, I find the detail to be much more lifelike than a warmer sound often equated to the analog domain. The striking clarity exists across all ten tracks and easily exhibits the harmonics and clarity of every part. What’s more is the depth that is embedded into the effects and spatial ambience that gives air to this fabulous recording

Tales from the Dreaming City absolutely adventures to other worlds, and these are places you’ll certainly want to visit. This album has become my favorite instrumental release in 2018, and I highly recommend it for your listening pleasure. The stereo hi-res version sounds amazing, and is included when you order a CD through Wingfield’s MoonJune BandCamp page. Progressive and fusion jazz enthusiasts are sure to enjoy this release as much as I have already, jump on board and find your way to the Dreaming City.