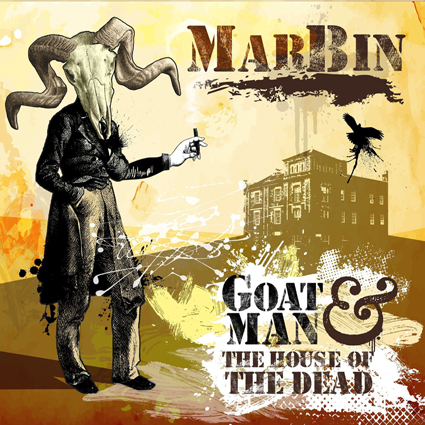 After saxophonist Danny Markovitch and guitarist Dani Rabin founded Marbin in Israel back in 2007, the duo relocated to the Chicago area, and recorded their eponymous debut album in 2009. They subsequently met Pat Metheny Group drummer Paul Wertico and bassist Steve Rodby creating the initial quartet lineup of Marbin and releasing their 2011 album Breaking the Cycle issued by MoonJune records. A few years and albums later, the jazz-rock world fusion band Marbin releases their sixth album “Goat Man and the House of the Dead.”

This heavy hitting energetic album unleashes an imaginative soundtrack to a movie possibly where camels and the modern world collide. The nine new compositions tell detailed stories with razor sharpness and fantastic audio clarity. Core members Markovitch and Rabin pair with drummer Blake Jiracek and bassist Jon Nadel, who together add depth to the compositions and amplify the solos, taking Marbin to new heights.

I have followed Marbin over their past few releases, and was very excited to learn that their latest album would also be available as a 24bit / 88.1kHz stereo download for those who picked up the CD copy. The hi-res recording sounds wonderful as is evident from the opening track “Buddha Complex” through the closing number. Check out how the reverb decays across the soundstage during the breaks, and listen to the striking clarity of both the guitar and sax solos as they rip through their parts. Drums are solid with a full whap to the snare and round thud pumping from the kick drum. Bass is deep and accentuates the thrust of these powerful pieces.

The third track “The House Of The Dead” opens with a euphonic rhythm guitar that demonstrates how well the attack of each chord strike has been perfectly captured and delivered in hi-res into our listening rooms. The soundstage is wide, easily apparent as the ambience decays after each chord hit, as the band kicks in I really feel as though they are on stage in front of me. As Marbin breaks from the sax melody into the solo, one really feels like dancing to the groove that is overlaid by Markovitch.

Marbin’s Goat Man and the House of the Dead is a jazz-fusion lovers dream come true, with blistering solos and magnetic melodies carried by a rockin’ rhythm section. This continues to be evident on the fifth song “Whiskey Chaser” which features an incredible guitar solo from Rabin. The mix is very well balanced providing space for each musician to be easily heard. Just remember this is a 2.0 mix with no sub, yet the bass finds real lows that ground the driving tunes. Meanwhile, the cymbals shimmer and guitars have a zesty bite.

Let’s be clear, Goat Man and the House of the Dead is not an album to fall asleep to, rather this could be your morning cup of Joe. This is a fervent release that absolutely broadens the definition of jazz-fusion by adding in world and progressive elements. It is now my go to record for jump starting my day.

Highly recommended for fans of jazz-fusion and those who love boundary breaking music. Available as a high resolution download from their band camp page when you purchase a CD copy. Definitely another fantastic release by Marbin and distributed by Moonjune records.

UPDATE Aug 2017: The Hi-Res version of this album is no longer available.

CD or MP3 only, formerly available as 24 bit / 88.1 kHz download files from BandCamp.