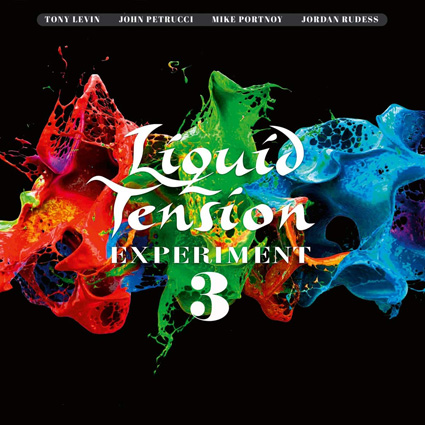 Some twenty years on, the legendary supergroup Liquid Tension Experiment returns with their third album, aptly named “Liquid Tension Experiment 3.” The group is comprised of drummer Mike Portnoy of Transatlantic and Sons of Apollo, guitarist John Petrucci of Dream Theater, keyboardist Jordan Rudess also from Dream Theater, and Tony Levin most well known as the bassist with King Crimson and Peter Gabriel.

With a heavy progressive and slightly leaning fusion sound, the band hits hard with exalting power that takes synchronicity to a new level. There is a mix across the 8 songs, 4 that were fully composed, 2 duets, 1 on-the-fly jam and their meticulously arranged cover of Rhapsody in Blue. Released as a Limited 2CD + Blu-ray Artbook edition that contains a 5.1 mix by Rich Mouser in DTS HD Master Audio and LPCM both in 96kHz / 24-bit, as well as a stereo 96kHz / 24-bit LPCM codec too, plus an onslaught of visuals that accompany the music. The artbook edition also contains nearly an hour of additional improvised jams. For analog collectors, a gatefold black 2LP + CD set is also available.

The shredding finger workout for the musicians on the opening track “Hypersonic” finds the drums, bass, and guitars spread across the front three channels, while keyboards add additional parts in the back channels, filling out the surroundscape. Simply put, the sound quality is nothing less than exceptional, which I would expect from a grouping of stellar musicians like this. However, it doesn’t stop at the ear, the visual eye candy on the screen is a fantastic montage of vivid colors and shapes that glide and rapidly change in coordination with the music, bringing the 60’s back to life. Liquid Tension Experiment truly engages the listener right from the start and keeps the flow going throughout the album.

“Beating the Odds” clearly reveals to listener’s that this is a fully instrumental album that is ramped up with sizzling guitars and blurring synthesizer solos, along with synchronistic drums and bass parts that carry the songs forward. The technical prowess of the musicians is truly showcased and placed in a powerful front centric mix that will rattle your walls and shake your windows. Sitting in the sweet spot will yield an immersive feel, although don’t expect tons of discrete elements thrown behind you, instead dive into the depth and excellent dynamics.

I’ve come to really like “Liquid Evolution,” which has a very electric New Age sound. The song is sonically rich and soothing, exposing the incredible sound quality of the recording. The kick is round and full, while the snare is rich and resilient, with the bass easily digging deep underneath. Plus, on this track it become very easy to notice the transparency of the recording, which continues to elevate my overall enjoyment for the mix. Also, take note to the ambient reverb that spreads nicely across the back channels, providing an extended space around the listener.

I would be remiss if I didn’t mention LTE’s take on the classic “Rhapsody in Blue” which has been taken into more than simply fusion-jazz, instead extended into a hard hitting rock piece at points throughout this extremely diverse tune. Rhapsody in Blue takes on an entirely new life, a wonderful twist on an already marvelous song. The mix also gives greater weight to parts in the back channels, making this a true highlight both musically and sonically.

The final couple tracks on the album also delve deeper into an immersive space, while continuing to offer outstanding sonics alongside the accompanying visual footage. The stereo layer is equally outstanding sonically, but naturally lacks the added depth offered by the surround mix into the listening room. While the channel separation is plenty wide and the soundstage offers nice depth, it is certainly a flatter version of the surround mix. I also felt that some keyboard parts became a little lost as they didn’t have the advantage of discrete placement in the back channels. Of course, my perceptions have already been biased having first chosen to listen to the surround mix, and my own personal passion for the same. Realistically the stereo mix is excellent, and for audiophiles that prefer that dimension, you will be extremely satisfied. A technical side note, the LPCM stereo layer contains digital distortion that is audible briefly at about 48 seconds into the song Rhapsody in Blue. This seems to exist on multiple copies and is likely an unfortunate mastering error.

The packaging is excellent, along with the liner notes. I must mention the two CD’s that are included, as the Blu-ray doesn’t contain all of the material found in this deluxe edition. The first CD contains the 8 track album which is duplicated in high resolution in stereo and surround on the Blu-ray disc. However, the five bonus tracks, which are all studio jams, are only available on the second CD. I consider this a missed opportunity, as there is plenty of space on the Blu-ray disc to give fans an audiophile version of these tracks.

For fans of Liquid Tension Experiment, collectors of works by any of the bands four members, LTE3 is strongly recommended. Surround sound collectors with a curiosity will also want to dive in, and collectors of progressive fusion music will surely want to spin this too.