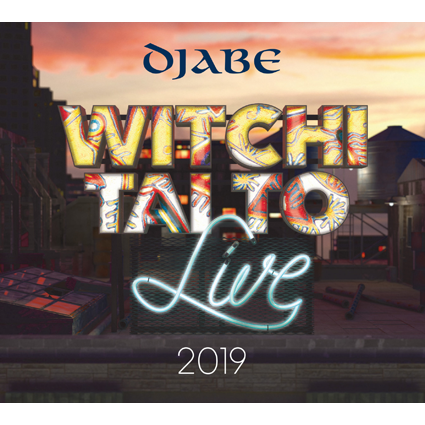 In 2019 Djabe held a surprise premiere concert where they played their 1998 “Witchi Tai To” album, acknowledging the release of the remixed and remastered double vinyl version, which had been completed earlier in 2018 marking the album’s 20th anniversary.

Witchi Tai To remains one of the band’s most successful albums to date. The original CD and LP also has received the Golden Giraffe Award from the Association of Hungarian Record Publishers as the World Music album of the year. Tamás Barabás, who recorded the album, remixed Witchi Tai To in 2014 using the original multitrack tapes, and also created a surround mix for the release of the DVD-Audio. A year later, the Djabe: Witchi Tai To media book was released, which included the 2014 remixed audio on CD and DVD-Audio in the form of an LP-sized 64-page book. In addition to these, a full CD of extra remixes, concert and rehearsal recordings were included in the book, as well as a DVD of the Witchi Tai To Tour concert film, previously released on VHS tape, recorded at the 1998 tour, with plenty of visual extras.

A few years later for the 20th anniversary, a new double LP was released. Encouraged by the success of the release, Djabe organized a premiere concert at MOMKult. Ferenc Muck. Members from the original line-up were called on stage, and András Sipos also appeared, via video recordings.

The 1998 big hits Coffee Break, Djabe and Visions were also performed at the concert. And with the premiere of Early Morning, there was a composition that the band never played live, not even on the 1998 debut tour. In the second half of the concert, after the introduction of the Witchi Tai To album, the band played from the then current Flow album, in which Ferenc Muck also participated.

Take note that the CD is 30 minutes longer compared to the LP, adding a significant addition from the Flow album. For high resolution immersive listeners, the DVD includes the entire concert in high resolution stereo and 5.1 surround sound. In fact, the band actually played live using surround sound at the concert, and the DVD faithfully reproduces the placement of instruments in the mix that the audience heard in the theater.