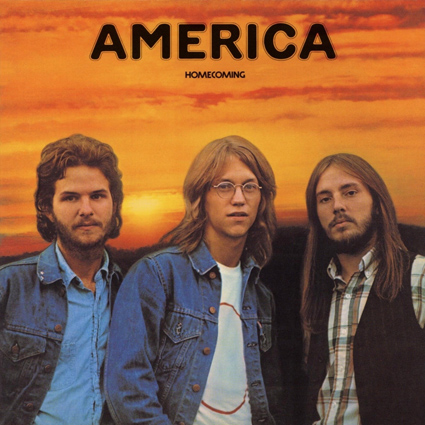 With their vocal harmonies and signature acoustic guitar lines, , America's second release Homecoming album includes one of their most well known hits, "Ventura Highway." The trio was determined to avoid the jinx often associated with "sophomore” releases, thus they pulled out all the stops to reach their goal. Building on the acoustic guitar sound found on their first record, thus featured more electric guitar and keyboards.

Reaching the Top 10 on Billboard's Pop Albums chart in 1972, Homecoming was subsequently certified platinum in the USA. Featuring two other hits, "Don't Cross the River" and "Only in Your Heart." the album is a collection of thoughtful, well-written, and skillfully sung songs. Now it is available on Hybrid Multi-Channel SACD with a 5.1 mix, re-issued by Audio Fidelity who has been making a splash with several other classic rock releases over the past several months.

Surround sound mixing engineer Elliot Scheiner has created another fantastic 5.1 mix of a wonderful album. The well recognized individual harmonies of America are placed in different speakers, naturally with the lead up front. Guitars are crisp and spread out across the sound stage with a pleasantly deep round bass grounded between the front channels. Along with improving the sound quality, Scheiner still stays very true to the original ambience of the classic mix, limiting the use of spatial reverb and delays that can be heard on remixes by other multi-channel engineers.

The stereo SACD layer has been masterfully handled by Steve Hoffman and carries much of the same level of clarity found on the multi-channel mix. Critical listeners will notice subtle differences in vocal levels between the two mixes, along with a more distinct drum sound on the 5.1 mix which really brings out the high hat, removes the boxyness from both the snare and kick drum, while also giving the overall kit just a nudge forward. I prefer the multi-channel mix, which of course was my main reason for getting this SACD.

When the 5.1 mix was originally released on DVD back in 2001, it was available as a 24bit / 96k version. Without that copy in hand, I can’t speak to the differences (if any) in sound quality between the current SACD and former DVD-Audio release. However, this doesn’t change my opinion about the phenomenal work done by Scheiner to create an enveloping aural experience of the album Homecoming. I continue to appreciate how instrumentation is placed around the four main and center channels in different ways from track to track. There is no need for ear candy with moving parts within the mix due to the nature of the music and arrangements, yet careful placement of these parts around the sound stage absolutely brings out the character and uniqueness of each song.

America fans will surely want to pick up this version for the sound quality alone, and surround sound fans will find this a perfectly joyous album to perk up their day and excite their ears.