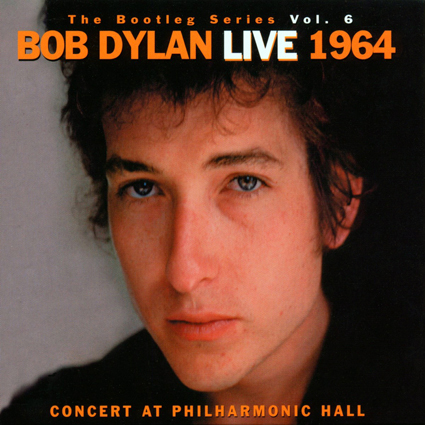 While you may possess the bootleg, with all seventeen songs contained here and most likely to have some pretty good sound quality, your best bet is to pick up the SACD 5.0 release from Audio Fidelity in order to really relive this performance, Of course don’t expect an immersive surround sound mix, as this is an all acoustic show featuring Dylan playing his guitar and harmonica while singing out his poetic tunes. Instead you are transported back to Philharmonic Hall where yu are sitting in the audience centered near the front with reflections emanating from the rear speakers and Dylan’s vocals crowing from the front three channels. Just close your eyes and feel the magic of this 1964 show that has been preserved so nicely on this recording.

Did I mention that the sound is excellent? Overall it is so immediate and wonderfully warm, and I am impressed how the transfer is so extremely clean with lively dynamics. Basically for fans seeking acoustic Bob Dylan, this concert is the Holy Grail, this is the young Dylan with his ever so unique voice, which is in impeccable shape. Additionally the delivery is enthusiastic with slightly altered melodies to some of his most well known songs.

Sure, I could complain that the recording of his guitar is somewhat dull sounding, yet I wager that this is exactly the way it sounded the night of his performance. While it lacks the shimmer and crispness of other recordings of that era, it snuggly fits in with his voice and harmonica. Both the vocals and harmonica are so vivid I absolutely feel as if I am right there so many years ago. Dylan clearly knows his audience and has quickly developed the confidence of a well seasoned performer. Joan Baez appears for duets on four of the songs near the end of the second disc, lending another layer of excitement to this already fantastic concert.

This is a pricey commitment best suited for Dylan fans, be it in surround or stereo. Both DSD layers are music to my ears, and certainly enjoyable from a historical and sound quality perspective. You should receive both a 56 page booklet and cover insert. The folding cover insert I received is not the actual album cover, and a number of collectors apparently have received no cover at all. OK, but we buy these shiny SACD’s for the music anyway, right? I don’t think that Bootleg Series Volume 6 is a must have, but for those who pick it up, I am sure you will enjoy the recording as much as I have.