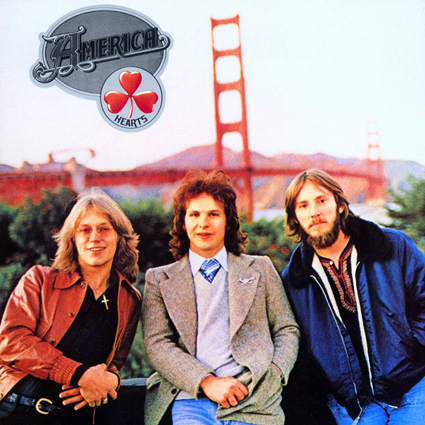 America released many hit albums including their fifth studio release which is a favorite among fans. This superbly crafted 1975 classic was produced by legendary Beatles producer George Martin and is a musical treasure filled with great harmonies and hooks!

Although Hearts didn’t receive the modern 5.1 mix, it still strongly holds the surround magic embedded on this classic quad version. In fact, the mix is very modern, keeping the rhythm section up front, with lead vocals placed in the center. As is common with current day surround mixes, the back channels sing out the secondary parts, which primarily include guitars, keyboards, strings and backup vocals, along with reflections from instrumentation heard in the front channels. I wouldn’t expect anything less from George Martin.

America was always well recorded, and the overall mix easily shows the expertise of the recording engineers. There is a wonderful openness to the mix, with a very pleasing shimmer and sparkle to the guitars. Vocals sound extremely natural, and the drums really sound lively with a fantastic snap and shine. It simply seems evident to me that the recording process kept improving with each album.

While there was a moderate difference between the surround and stereo mixes for the Homecoming release, that simply isn’t true for Hearts. Given Homecoming was mixed for surround 30 years later, it is understandable there were obvious differences between the two versions. However, Hearts was mixed at Air Studios in London, likely during the same sessions, leading to literally an identical mix, albeit one is quad and the other stereo. The instrument balances and tones seem to mirror each other between the two codecs, thus for listeners of the stereo layer, I imagine this would be one of the best, if not the best transfer available. The album truly sounds wonderful.

Recommended for fans of America, and advised for surround sound and quad collectors. Hearts is an uplifting pop record that is sure to be loved by you.